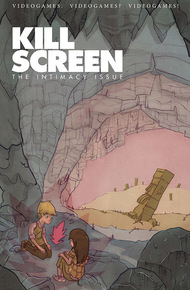 Games teach us, and they change us - but only if they get close to us. Welcome to "Intimacy," our most personal, most haunting, and most uproarious issue.

The best writers and thinkers in gaming tell their stories, and they hold nothing back. Brendan Keogh sees anorexia through the lens of Grand Theft Auto: San Andreas. Victoria and Anthony Bartkewicz share the secret of a happy marriage: Pummeling each other in Soul Calibur IV. Ryan Bradley explores the mystery of hand-holding, while Justin Amirkhani asks game designers about the most influential fights they've survived. We take a walk down memory lane with Leisure Suit Larry's Al Lowe, speak with Katherine Isbister about social gaming, and ask the creator of Digital: A Love Story if she's ever been in love herself. And Jenn Frank writes a personal history of her Second Life, leading us from an Amsterdam sex den to an Anglican church.

These are just a few of the stories in our longest and most powerful issue to date. Share it with someone you love.

Chris really wanted to have a sex issue but we thought the theming was a little bit too Cosmo. This was a good handshake and for some reason, the issue dealt with more of the darker sides of sex and intimacy. Oh well. – Kill Screen Magazine

From the article All the Spaces Between Us by Jenn Frank

Here is what had happened: after I'd finished my avatar, Scott had taken me to the Wastelands. The Wastelands region, a barren, post-nuclear dystopia, was my whole reason for touring Second Life.

There's this entire sim, OK, where a simulation is—how did William Gibson define cyberspace? "A consensual hallucination experienced daily by billions of legitimate operators"—so Scott and I were visiting this user-generated simulation, a place made by not billions but possibly hundreds of Second Life users, all these creators, each with his own tiny patch of land, everybody committed to building burned-out shacks and crooked towers from tin plates and plywood. This aggregated, makeshift adroitness would make any cyberpunk swoon, all these small pieces, loosely joined, culminating in a Mad Max mud flat.

And because these individual aesthetics and minds thrum in concert with one another, they can produce a consummate apiary that is so much more robust and organic and visionary than you could ever find in some movie or video game. A film set or game location is a small-minded thing, just a room in a dollhouse, hamstrung by its one set designer or its one project lead.

So I'd been admiring the Wastelands sim—I had warmed to this work of a hobbyist hive mind, and now I was singing its hymns—when I realized I was dressed all wrong. I mean, really. Who pairs brown roller skates with feathered black angel wings? And jeggings? My avatar was blithely skimming the dunes in the getup of a 15-year-old Slipknot fan.

"Just a second," I'd typed to Scott. "Don't go anywhere. I need to take these stupid wings off."

Then I right-clicked on my avatar's wings. A context menu, round and shaped like a pie chart, appeared on the screen. I tried to click on the correct wedge of pie.

One stray mouse-click later, my avatar was completely naked. The wings were gone, but I'd managed to vaporize all my clothes along with them, just like that.

And then, on the next line,

And then Scott's reply,

I tried to hide myself behind a tree.

I fumbled through the onion of menus, feeling around for a shirt, a pair of pants, anything.

The next day at my job, I could not look Scott in the eye.

But I had learned an important lesson. The embarrassing situation can be completely artificial, yet the humiliation is real.