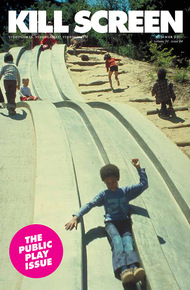 Before Xbox and PlayStation, there were arcades and before arcades, there were playgrounds. Before playgrounds? There was just play. From street games to arcade games, public joy and public humiliation, the latest issue of Kill Screen reveals how we're playing together.

Simon Parkin witnesses a Dance Dance Revolutionmaster hustling a crowd in London. David Wolinsky signs up for a Donkey Kong class taught by none other than Steve Wiebe (The King of Kong); can Wiebe teach him to hit the kill screen? (Spoiler: He doesn't.) Jon Irwin tells the troubled story of Nintendo's first 3-D console. Brian Taylor reports on real-life Quidditch—minus the magic, but with the brooms. Kirk Hamilton takes to the streets of San Francisco in the Go Game. Filipe Salgado reports from the libraries of Toronto, Majed Athab surveys cut-rate arcades in Manila, and Mathias Crawford takes us back in time to the sculptors, dreamers, and underage crooks in San Francisco's oldest playground. Tracy Fullerton introduces the concept of masterful play. And Chris Baker goes up against one of the biggest stars of professional gaming - with ego-crushing results.

We've got interviews, too—Michael Abbott interviews gamification doomsayer and ex-Disney Imagineer Jesse Schell, and Jason Johnson interviews Jim Babb, the designer of Must Love Robots and Socks, Inc.And because it's not enough to read about games, Lana Polansky documents three street games you can play yourself.

For a publication about videogames, we again wanted to buck conventions and look at non-screen-based forms of play. We often forget that some of the most interesting experiments in game design are being done in the real world. Not to mention, we got some amazing original photography of San Francisco's oldest playground. – Kill Screen Magazine

From the article Seeing Red by Jon Irwin

Fifteen stones sit on islands of moss, submerged in a lake of gravel. This is Ryoan-ji, a rock garden in northwest Kyoto, and a sacred place of meditation and worship. Translated, the name means "temple of the dragon at peace". The formation is a national treasure. Some call this simple arrangement of stones by an unknown gardener one of Japan's highest cultural accomplishments. Here is the trick, the nifty sleight-of-hand that earned such lavish praise: Only 14 stones are visible from a single vantage; as one moves into view, another fades away. To see the 15th stone, the legends say, you must first achieve enlightenment. An hour south, in a large white building overlooking a rice paddy, Nintendo's architects of play dream up new toys.

"Sometimes a company develops something so nifty that it takes a while before anyone figures out how to use it effectively." So begins an article published in the August 1990 issue of Popular Mechanics, titled "A New Way to See." The company was Reflection Technology, then located in Waltham, Mass.; the "something so nifty" was a miniature display device, invented two years prior, that uses a single column of red LEDs, a magnifying lens, and a swinging mirror to create an image of "vibrant red characters or graphics on a black background." Hold the device, called the Private Eye, up to your face and the tiny display appears to be full-scale—the equivalent of a 12-inch screen. When it was invented the possibilities appeared limitless, revolutionary. Reflection Technology was shopping the display to anyone who would listen, from airplane mechanics to anesthesiologists. Office workers needn't look at blurry, low-res monitors anymore; they'd all wear a headband affixed with the Private Eye, giving them a crisp display and a desk free of bulky equipment. Reflection's sales team even visited the Pentagon: The Navy SEALS wanted to put the screens inside divers' helmets. Four years earlier, Reflection was working out of the basement of an old Portuguese bakery in Cambridge. Now the U.S. Military.

But there was a problem: Though dozens of companies bought development kits, very few products actually made it to market. Feisty engineers would fall in love with the technology and begin a project, but before long their work fell out of favor with the actual decision makers. Secretaries that tested the device had a near-unanimous response: "Can I do something different tomorrow?" The all-red text just wasn't comfortable to look at for extended periods.

But Allen Becker knew this display was something special. The young entrepreneur, who had founded the company in 1986, was used to overcoming obstacles. Not feeling challenged, he'd dropped out of MIT to install computers in Saudi Arabia. Then he worked with Ray Kurzweil at The Reading Machine Co., where they developed products to help blind people read. When Al saw a problem, he fixed it. The Private Eye was just another problem lacking a solution.

The Popular Mechanics article ends with similar optimism: "Other applications for the Private Eye are probably manifold. Reflection Technologies is interested in any good ideas."