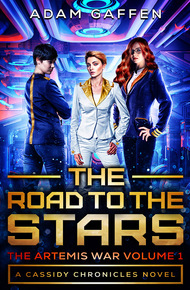 Adam Gaffen is the author of The Cassidy Chronicles. There are currently eight books in the Cassidyverse: a four-book epic series (The Artemis War); a collection of stories (Into the Black); the first book in a new series (The Ghosts of Tantor); a book written by one of the main characters (Memories of Aiyana); and, of course, the book that started it all (The Cassidy Chronicles). He keeps busy with writing and editing and appearing at conventions. When he's not doing any of that, he's at home in southern Colorado with his wife, five dogs, and five cats, wondering where all the time goes.

The Road to the Stars by Adam Gaffen

Kendra and Aiyana Cassidy's dreams are coming true. Aiyana's teleportals are growing in popularity, and Kendra's starship is nearly complete. But the Artemis Colony is throttling the planet's supply of rare earth metals. If Artemis isn't stopped soon, in twenty years ¾ of the population will be dead. They don't want a war, but if Artemis insists, Kendra's never learned how to back down.

Before them was the bridge, fitted out in cool shades of grey and blue. Around the perimeter were bank upon bank of monitors and workstations, with rugged-looking chairs firmly attached to the floors. Towards the back, facing forward, was a console with a single seat. The circular center was a half meter lower than the surrounding deck. Backing up to the console above were a pair of seats, with complex controls and screens on both sets of arms. Further forward were a trio of seats arranged behind a banked array of controls.

None of this is what caught Alley's eye.

Instead, she focused on the broad and clear expanse at the far side of the bridge, allowing them to look out at the dock and space beyond.

"It is a screen. You can have it display virtually anything the computer can generate, whether that's a view of the surroundings, tactical information, sensor readings, whatever. But the screen is embedded in a slab of optical aluminum, eighteen centimeters thick."

"You put a window. On a starship."

"Yes. You seem a little stuck on this."

"You put a goddess loving window on a starship!"

"We put lots of windows on this starship. You should see the one in the observation lounge on deck eight; it's bigger than this one."

"Are you totally out of your mind?"

"This seems to be really bothering you."

"Why isn't it bothering you? It's a window on a starship!"

"Because I know it's perfectly safe. It's nearly as hard as sapphire, stable at temperature extremes, and resists shattering. That doesn't begin to get into the other tricks we've tucked into it."

"When better? This is the first starship; what we do here sets a design standard for all future ships, and I wanted a window!"