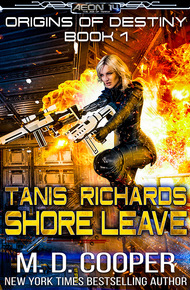 Malorie Cooper is a long-time lover of science fiction and has written over 120 books in her Aeon 14 universe. Crafting the books of Aeon 14 is her life's passion and she endeavors to fill the stories with real characters living in a fantastical, yet hard sci-fi universe.

After a seven-month tour at the edge of Jovian space, Commander Tanis Richards has come into port and she's looking forward to some much-deserved shore leave. Unfortunately, her superiors have other things in mind.

Enfield Technologies developed a new technique to pair enhanced L2 humans with AIs, and the military wants Tanis to undergo the procedure. Though she feared the worst, after meeting Darla, Tanis realizes that having an AI—especially a fabulously wealthy one—is more advantageous than she'd ever imagined.

Things go downhill as Tanis is enjoying a meal at one of the resort's upscale restaurants. There she sees a man who should be nowhere near the posh venue—largely because she killed him a week ago.

This revelation thrusts Tanis is thrust into a shadowy conspiracy between elements within the Terran Military and the Jovians that threatens to bring down the entire Federation. The only problem is that when she gets to the bottom of it, what she finds is...none other than herself.

Tanis knew that if she didn't kill Captain Unger, her life was forfeit.

Her gaze swept across the Norse Wind's engine room, looking for anything she could use against the man in the fight that was to come.

There was nothing close to hand. This would be a zero-g scuffle. Her only hope was to disarm him with her first strike.

Lovell, the ship's AI, shouted into Tanis's mind over the Link.

Without a moment's further thought, Tanis released the maglocks on her boots and pushed off the console toward Unger.

The captain's eyes widened with surprise as she flew toward him, then they narrowed, and he slammed his hand down on the manual ignition switch.

Tanis had to give Captain Unger credit. She didn't think he'd activate his ship's engines without the control rods just to blow his ship and kill her, but apparently he believed in his cause—whatever it was—enough to die for it.

His enraged expression gave way to a single cry of dismay before Tanis slammed into him.

She delivered a punch to his solar plexus, and Unger curled up, flying back into the reactor's rad shield. Without gravity,d Tanis's momentum kept her moving forward as well—albeit more slowly—and she crashed into the freighter's captain, delivering a blow to the side of his head and a knee to his groin.

The strike sent her cartwheeling backward, high over the engineering bay's consoles.

"Shit!" Tanis swore as she activated her armor's attitude jets and flew down toward the console.

Unger was pulling himself forward across the deck, and she flung her lightwand at the man to forestall him while reaching out for the switch with her other hand.

Everything around her fell away, all her focus on the manual ignition switch.

She wasn't going to reach it in time; throwing the lightwand had altered her trajectory just enough that her fingertips would pass the switch with a centimeter of clearance.

Hell no! She swore to herself. I'm not dying in some shitty freighter over what was supposed to be a routine inspection!

Tanis swung her arm up, the movement sending her spinning again. Just as Lovell began to call into her mind, warning her of disaster, the tip of her right boot caught the switch and pushed it back up.

There was no time to recover from the move, and she slammed into the deck half a meter from Unger. Looking up, she saw that the captain had one hand wrapped around a support pole, and his other fist clutched her lightwand.

He caught that? She couldn't help but be impressed by Unger's dexterity in catching the electron blade.

Tanis called out to her patrol ship, reaching the Kirby Jones's pilot.

Tanis returned her attention to Unger as he lunged soundlessly at her with her lightwand in hand. She reached for her slug-thrower—only to realize that it had come free from its holster sometime in the preceding scuffle. With a backward scamper, she got her side against a console and braced herself, waiting for the freighter captain to swing the lightwand at her.

She pushed forward off the console, twisting to the side, and slammed her left hand into his wrist, deflecting the attack. The maneuver spun her around, but it did the same to Unger.

She grabbed the edge of the console and activated her maglock boots, swinging them down to the deck. Finally reattached to a solid surface, she turned back to Unger and saw that he had done the same thing.

"C'mon, Terran soldier girl. Let's finish this." Unger's voice dripped with menace, and Tanis saw that he held a ballistic handgun as well as her lightwand.

Where'd he get that? she wondered.

No matter, it would take more than a few shots from the weapon to penetrate her armor. The lightwand was what she needed to worry about.

Unger fired a trio of rounds at her: two striking center mass and one hitting her right arm—barely missing the broken section of her armor and her wounded arm—already fractured, courtesy of the fight to get this far into the ship.

Tanis lunged forward again, closing in to leverage her augmented strength against the man. He slashed at her, coming in high, and she raised an arm to block the blow while kicking at his right knee. Unger jerked his leg away in the nick of time and fell back only to renew his attack, firing point-blank at her head while bringing the lightwand in low.

Her helmet deflected the shots, and she sidestepped the strike with the lightwand, managing to grab Unger's gun-arm under her left arm. He grunted and swung the lightwand around, aiming for her head. Tanis caught his wrist with her right hand, gasping as she felt her humerus bend and fracture further. She closed her eyes against the pain, and twisted to the right, getting her hand on Unger's gun.

The man cursed and bore down on her with the lightwand.

"Gonna die here, soldier girl. And I'll still get my cargo where it needs to go."

"Fahhhk!" Tanis screamed as the bone in her arm snapped, and the lightwand came down, driving into her shoulder far enough to stick out her back.

A ragged gasp tore out of Tanis's throat as she sat up, sweat pouring off her body, the bed's thin sheets plastered to her. She blinked, casting about for her adversary, when she realized that she was in her quarters aboard the Kirby Jones.

Lovell, the ship's AI, spoke into her mind.

Lovell asked with a soft laugh.

"Something like that," Tanis replied as she reached up and touched her shoulder. The wound was still sore, though the medtable had stitched her back together with its usual care.

Her arm still ached as well, her bones complaining about the quick re-enforcement job the autodoc had done. Once she got back to base, she'd put in a request for a proper repair on her right arm.

Considering that she'd broken it three times in the past two years, the space force docs might recommend growing a new one—something Tanis hated having to do.

"No, my mednano can knock me back out…if I want to sleep again, that is."

Lovell said, and Tanis could feel his presence fade.

She laid back on her bunk, the final moments of that fight with Captain Unger playing over and over in her mind. She'd killed him right after he sank the lightwand into her, wrested the pistol from his hand and put a half-dozen holes in the odious man.

He'd bled out in his ship's engine room, and she'd watched him die over the course of several minutes.

At the time she'd felt nothing but the fiery elation of victory and survival. But now…now she wondered if she could have saved him, gotten the man into stasis sooner and had the autodoc repair him.

Captain Unger hadn't been Tanis's first kill during her time in the TSF, but it was the first time killing an enemy had felt a bit like murder.