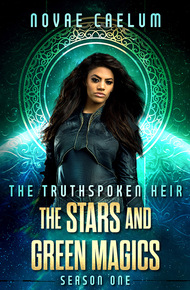 Novae Caelum is an author, illustrator, and designer with a love of spaceships and a tendency to quote Monty Python. Star is the author of The Stars and Green Magics (a winner of the 2022 Laterpress Genre Fiction Contest Fellowship), The Emperor of Time (a Wattpad Featured novel), Good King Lyr, and Magnificent. Stars short fiction has appeared in Intergalactic Medicine Show, Escape Pod, Clockwork Phoenix 5, and Lambda Award winning Transcendent 2: The Year's Best Transgender Speculative Fiction. Novae is nonbinary, starfluid, and uses star/stars/starself or they/them/their pronouns. Most days you can find Novae typing furiously away at stars queer serials, with which star hopes to take over the world. At least, that's the plan. You can find star online at novaecaelum.com

The Stars and Green Magics by Novae Caelum

In the interstellar kingdom of Valoris, everyone knows the royal family is watching. They can be anyone and anywhere with their shapeshifting abilities—they are Truthspoken and to be feared. Of course, that doesn't stop the high houses from trying to take them down by any means they can.

Arianna is the perfect Truthspoken Heir: beautiful, intelligent, and a master of her shapeshifting craft, determined to one day rule with the same control as her father. Her dreams come crashing down, though, when she's attacked by a rogue Green Magicker at her betrothal to a rival high house prince, when it's known that magickers can't do violence. Was it treachery, was it personal, or was it something else? Arianna has been slowly getting ill for weeks, and Truthspoken don't get sick.

Dressa is the second Truthspoken heir and would like to stay that way, thank you very much. She's the glittering socialite of her father's court, more loved than feared. But when her older sister falls ill and is secretly sent away from court, there's still the matter of a much needed marriage alliance with a rival high house—and an absolutely gorgeous prince, who her sister wasn't keen on marrying anyway. When her father orders her to take her sister's place until she returns—her name, her appearance, everything—can Dressa carry on the act without falling for her sister's intended bride?

Paranoia around Green Magickers is growing, noble plots are closing in, and in deep space, the only aliens humans have met are showing signs of not being pacifists after all. Can the Truthspoken hold their kingdom against the coming storm when it's already crumbling from within?

The Truthspoken Heir collects the first season of The Stars and Green Magics, an epic space fantasy serial set in a diverse, queernorm universe with shapeshifting royals, glittering court intrigue, and space magic!

"A Truthspoken's life is never truly their own. Truthspoken have choices, but the choices always come down to 'is it good for the kingdom?' If not, then it's not a choice at all."

"My daughter. I've reviewed all available candidates and have begun negotiations with the Javieri family for you to marry their daughter, the prince."

Arianna Rhialden, Truthspoken Heir to the interstellar Kingdom of Valoris, stared at her father with perfect control. Perfect poise. Her breath didn't quicken, her quickening heart rate didn't show—and it slowed again when she willed it. She was Truthspoken, after all. She was in control of her body and her mind.

"Father," she said, inclining her head. "I'd hoped to be consulted on the choice of my future consort."

They were in her father's study. A familiar room, homey in its way. There wasn't currently a fire in the hearth—her father had been in meetings all day—but the beige walls themselves held a warmth, the powder blue, overstuffed couch she sat on knew her form. She'd spent many hours here under her father's training, learning how to read every nuance of a face, a posture, a personality. Learning how to shift them at will and become someone else.

Her father sat back, his narrow eyes sharpening on her. His black hair was bound into a femme-style knot to one side, diamond and red nova heart pins holding it in place. His red lips twitched, and it wasn't in a smile.

"The Javieri family was the only real choice. It was them or your mother's family, the Diors—and that line is too close to your own. You know the power they hold, and the power they threaten us with. You know your duty, Arianna. You have always done your duty. Prince Lesander is charismatic, she is excellent with handling people, she has as much social training as it's possible to have without being Truthspoken."

He raised his brows. "She's beautiful."

Arianna gave a tight shrug. It wasn't that she didn't appreciate beauty—she did, even if she had little desire to actually sleep with anyone. Or the time to explore if she ever wanted that option. That wasn't the issue, though, was it? She wouldn't have to sleep with her wife, or husband, or spouse, whoever that would be.

Arianna was the Truthspoken Heir, and yes, it was her duty to marry. She'd always known it would happen, but she'd thought she'd have more time to train before then. She'd been steadily taking on more responsibilities at the palace. She wanted to go on a tour of the other worlds, solidify her power and persona in the public eye. She didn't want to spend a significant portion of her time entertaining her future wife.

There were very few people she actually liked in the universe, and she was sure that this Lesander Javieri would not be one of them. Hardly anyone was on a level enough to be interesting to her.

"I will, of course, meet with her if that's what you wish," she said.

"Arianna, I've already made the formal overtures to the Javieris. Lesander is on her way. That's a two-week trip from the Javieri homeworld near the Dynasty border. We'll convert one of the upcoming balls into an engagement ball in your honor. That popular band, the Rings of Vietor, will be in the city then—your sister would swoon to line them up for the ball. It will be an excellent opportunity to build your popular image, make your engagement a cultural event."

"Father," Arianna said carefully, smoothing out the edges of her green silk tunic, "is there something I should know, that you're rushing this engagement?"

He'd already made the plans. Adeius, then it was done. She'd have no choice.

Not that she ever had a choice. Her life was her kingdom's. Her life would never be her own.

She met his eyes and saw something there, just a flash of unease, that set her senses on alert.

"The political climate is volatile," he said. "Perhaps more than you know."

She knew a lot. She knew the politics of the Kingdom of Valoris with its one hundred and eighty-seven vassal worlds. She knew the ongoing schemes of the high houses to gain power and potentially overthrow the Truthspoken who ruled the kingdom. She knew the internal tensions around the Green Magicker sect and their need for more power, and the intensely alien Kidaa on the anti-spin border. She knew all of this, and she couldn't see where that added up to her needing to secure an engagement to the Javieri prince in the next two weeks.

"How? How is it more volatile than I know? I've been sitting Reception for the last month, listening to the courtiers' woes. The situation with the Javieris isn't any less stable now than it was a month ago. I've been judging, I've been ruling—"

"While I gather information. While I deal with the Navy and the Army. While I deal with the diplomats and ongoing treaty negotiations. Yes, Daughter, you have been ruling over much this last month, but don't forget, you are not the Seritarchus. You're not the ruler of this kingdom—I am. Power needs to be rebalanced, and this alliance with the Javieris will do that. Can you set aside your dislike for people of all kinds—"

Arianna stilled as she watched the disapproval on her father's face. She was losing control of her temper. Adeius, she'd been talking over him. She never got rattled enough to do that. She had to stay in control. The Truthspoken Heir must always be in control.

"I don't dislike people," she said again, her tone more moderate this time. "But I truly don't see how an engagement now will benefit the kingdom. It will only take me away from my duties, and you need me—"

"Arianna, I need you to do your duty as the Heir, and at this moment, that is to marry into the house that is most advantageous for the kingdom. You must marry, and you must have your own heirs."

She caught something in his tone, and her focus sharpened. "Is your life in danger? Have you been threatened more than usual—"

He laughed, a jarring, bitter sound. The red nova hearts in his earrings sparked in the light.

He so seldom laughed it gave her pause.

"Truthspoken are always in danger of assassination. The sooner you are married and your heirs are started in their incubators, the better for all of us. If I'm killed, you'll be the ruler. If you're killed—well, your sister isn't ready to rule a kingdom. I'm giving you every chance I can to give you a strong and stable rule when that time comes. May it be many, many long years off."

But she didn't like the edge in his voice. If she was always in control, he—well. He was the Seritarchus. He was control itself.

He stood, tugged down the cuffs of his midnight coat. "Do your duty, Arianna. Marry the prince. If you have to craft another persona for yourself to make it work—do that. Just make it work. The engagement will be in two weeks. Now, if you will excuse me, I have work to do, and so do you."