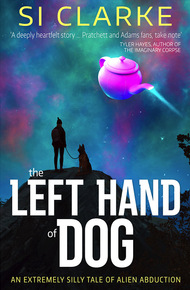 SI CLARKE is a misanthrope who lives in Deptford, sarf ees London. She shares her home with her partner and an assortment of waifs and strays. When not writing convoluted, inefficient stories, she spends her time telling financial services firms to behave more efficiently. When not doing either of those things, she can be found in the pub or shouting at people online – occasionally practising efficiency by doing both at once.

As someone who's neurodivergent, an immigrant, and the proud owner of an invisible disability, she strives to present a diverse array of characters in her stories.

The Left Hand of Dog by Si Clarke

Escaping intergalactic kidnappers has never been quite so ridiculous.

Packed with preposterous scenarios, quirky characters, and oodles of humour, The Left Hand of Dog tackles complex subjects such as gender, the need to belong, and the importance of honest communication. Perfect for fans of Charlie Jane Anders' Victories Greater than Death and The Long Way to a Small Planet by Becky Chambers – especially ones who enjoy endless references to Red Dwarf, Star Trek, and Doctor Who. This book will show you that the universe is a very strange place indeed.

'Prisoners to step away from the door,' boomed a voice from my watch. It wasn't Spock this time. We both jumped away from the wall.

I looked at my wrist. PURPLE BUNNYBOO SPEAKING.

'No way,' I shouted. 'No. There's no way your name is actually Purple Bunnyboo.' You might say I wasn't adapting very well to this – whatever this new experience was. I was still pretty sure I was dreaming. But it was a hell of a detailed dream.

A small door opened in the framed wall, maybe half a metre wide and half that in height. A tray with two bowls and two mugs was pushed through. 'We have analysed your nutritional requirements and provided food that meets it,' said the deep, gravelly voice. The door swung shut and disappeared.

'Would now be a convenient time for me to introduce myself?' said a new voice.

I stared at my watch: UNIVERSAL TRANSLATOR / PERSONAL AI SPEAKING. I'd never had any kind of app like that on my watch. Had someone tampered with it?

I looked at the food. Spock was quite keen to eat. I lifted the tray and carried it to the low table. 'How am I supposed to know which is which?' I asked no one in particular. 'Does it even matter?'

'The bowl on your left has been designed to meet your needs,' said the universal translator. 'The one on the right has a higher protein content, aligning to Spock's needs. The mugs are empty, but you can fill them from the tap in the bathroom.' It sounded like one of those text-to-speech programs. Just words. No real personality.

'What is it? And who the hell are you? What is this place? Who are these frakking bunnyboos? What the bollocking hell are we doing here? How did we even get here?'

While I bombarded my watch with questions, Spock waited impatiently – a steady flow of drool pooling at her feet. 'Feed Spock, please.'

I lifted the lid off the indicated dish. The contents looked like a sort of grey risotto, but the scent that hit my nose made my mouth water almost as much as Spock's was. 'Sweet potato vindaloo? Really?' I was sceptical of eating anything in this strange prison. But then, if this was all just a grand hallucination, what difference would it make if I imagined myself eating food? Besides, I was famished.

And so was Spock, obviously. 'Give.'

'It's what your friend's mind had flagged as favourite,' said the universal translator.

'My friend's… You're reading our minds? Hang on… Are you sure that's not mine?'

'It has been formulated to meet her nutritional requirements,' replied the disembodied voice. 'The ship's facilities prepared a meal of the appropriate nutrients and calories for each of you and then seasoned them with your favourite flavours.'

Ship? What ship? And then I just … gave up. I decided to go along with the dream, or the hallucination, or the prank, or whatever the bastarding hell this whole thing was. With a shrug, I set the bowl on the floor for Spock, who inhaled the contents. I lifted the lid off the other bowl. It looked like the same drab porridge. I sniffed it. 'What is it?'

'It is 500 calories' worth of nutrient porridge, comprising thirty grams of protein, eighteen grams of fat, twenty—' said the voice I was beginning to hate.

No frame of what? I took a tentative bite. 'Is that…' I tried to identify what I was eating. The lumpy, slimy texture wasn't helping the process. 'Mango?' I smacked my tongue a few times. 'And peanut butter?'

The first bite made me realise how hungry I was, so I sat and wolfed the contents of the bowl down almost – but not quite – as quickly as Spock had eaten hers.

Now that I'd decided to play along with this – for the moment, at least – it was freeing. I could indulge my curiosity without letting my panic get the best of me. 'Hey, universal translator – actually, that's going to get old really quick. Is there anything else I can call you?'

'You may call me anything you like, Lem,' said my watch.

'Kay, fine. I hereby dub thee "Holly",' I said. 'So anyway, Holly?' Spock stood up and headed for the bathroom.

I ran after Spock, hoping she wasn't going to pee everywhere – though I had no idea where she was supposed to do her business. Instead, I found her squatting over the hole in the floor. 'Oh, er, sorry, Spock.' I felt my face flush as I ducked and backed out of the bathroom.

'What the hell is wrong with me? I just apologised to my dog for seeing her do a wee – I've seen her wee every day since I got her.' I shook my head to clear it. 'Anyway, Holly, would it be possible to make a request to the kitchen?'

'Of course, Lem. Within reason.'