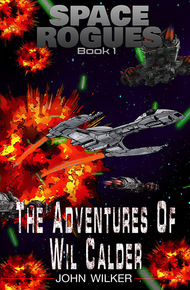 John Wilker is a science fiction author living in Denver, CO with his wife and dog, Paco. He's been writing science fiction since 2016 when he published his first book: The Adventures of Wil Calder. That book became his (to date) longest-running series. He's a member of the SFWA and Colorado Author's League.

Growing up in a family that made time to all sit down and watch Star Trek: The Next Generation together, John has always loved all things speculative. He's an avid consumer of the genre, whether print or screen.

The Adventures of Wil Calder by John Wilker

Wil Calder is an engineer and astronaut. While testing an experimental FTL pod, he breaks down near Neptune's orbit. That should have been it, but some passing smugglers, picked up his pod, thinking it scrap.

That was a few years ago. Now the ship is his and he's lonely and bored. He springs a few criminals thinking they'll make crew. He's mostly right. They are great crew, they aren't criminals, and they're tied to a conspiracy none of them are remotely qualified to handle, but that's how it usually goes, right?

The ship's central crew space comprises a lounge area, a kitchenette with a table—built into the side of the room—and a few other bits and pieces to make the space somewhat homey.

"So… where are we going?" Zephyr asks from across the table. She and Maxim have been holed up in their quarters since the previous night. Their quarters aboard the ship aren't half bad, considering the type of ship it is. Wil had the computer keep an eye on them when he finally went to bed, and when he woke up, they were both in the galley, cooking.

"Good morning to you, too," Wil says, punching buttons on a machine. "We're going to Fury…" He holds up his hand as both of their heads snap around to face him, mouths making what would be in other circumstances a comical "o" shape. "Hey, don't burn that bacon. It's the last until I get more."

"What's bacon?" Maxim asks, before Zephyr makes a signal to cut him off. "Fury is a hellhole. Even the Peacekeepers don't like to go there," Maxim mutters, going back to shoving the bacon around in the pan.

"He's not wrong," Zephyr says, not taking her eyes off Wil. She is still in her prisoner jumpsuit, just like Maxim, but at least it looks and smells like they've showered.

"No, he's not," Wil says calmly, still focusing on the machine. "And I completely agree. Unfortunately, that doesn't change anything. We're going to Fury. We're going because you two need new identities and there aren't many better places to do that. You also need gear. I've got some spare this 'n' that, but you'll need your own stuff, too. Especially things that need to fit right and weapons you like to use." The machine he's harassing finally makes some grumpy-sounding beeps and a few thunks before beginning to dispense coffee. "Now we're talking," he sighs.

Sliding bacon onto a plate in the center of the table, Maxim turns to Wil. "We have no money."

Zephyr, who has gotten up, now sits down next to him with a bowl of something Wil doesn't recognize, and starts scooping steaming piles of it onto Maxim's and her plates. Where'd that come from? he wonders. She looks over at Wil, eyebrow raised. He nods. Why not? She drops a pile of the steaming something on a third plate.

Maxim grabs some bacon, putting it on his plate. "We have no money," he repeats. Then he takes a bite, and his eyebrows shoot up in surprise. "This is delicious!"

Wil smiles. "I know, right? On behalf of all humanity, you're welcome. We don't have much to offer the galactic community, but we do have bacon. As for the money—consider it a loan against future payment, future cuts, whatever. I can't use you if you're easily tracked, still running around in Partherian prisoner jumpsuits." He sniffs the pile of something on his plate and then digs in, shoving a piece of bacon into his mouth with it. "I don't know what this is," he says, "or where you found it in my galley, but it's not bad!" He takes a moment to chew his food, then adds, "There's a few shops I trust down there, and a hacker I know who can get you new wristcomms and idents."

They watch as he shovels a few more bites of the mystery stuff and bacon into his mouth. Then he takes a sip of his coffee and continues, "There's also someone I need to see. We're gonna need some money—it wasn't cheap figuring out where you'd be, plus now outfitting you, as well. It's not my first choice for work, but it'll pay well, whatever it is, and as far as things go, I trust the source."

Trust might be a strong word to use, Wil reflects ruefully, but he doesn't have many friends in the sector.

Zephyr grabs another strip of bacon. "This really is quite good. Bacon, you said? What's it made of?"

Wil grins and stifles a laugh. "Ask me another time."

"Humans…" Maxim says, watching the display before turning to his food.