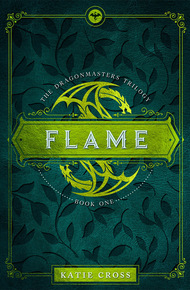 Katie Cross is ALL ABOUT writing epic magic and wild places. Creating new fantasy worlds is her jam.

When she's not hiking or chasing her two littles through the Montana mountains, you can find her curled up reading a book or arguing with her husband over the best kind of sushi.

Visit her at www.katiecrossbooks.com for free short stories, extra savings on all her books (and some you can't buy on the retailers), and so much more.

In Anguis, magic is forbidden.

Dragon Servants Sanna and Isadora Spence live deep in Letum Wood, where persnickety dragons and wars on the borders are the least of their worries.

Thanks to years of simmering tension, the hidden village is destined to crack. Soon. Sanna's deep love for the giant beasts causes her to make an irreversible mistake, while Isadora's disinterest leads her to a fateful decision that will change the course of the entire world.

Can the sisters prevent everything they know from falling apart? Or do they allow it to break and pave the way for new growth?

Join these beloved sisterwitches in a story about sisterhood, new magic, and dealing with change.

Katie is a wizard. No really, I'm pretty sure she knows how to wield magic. She writes tomes worth of epic tales involving high magic and wild places. There's no way she should know all of this unless she's actually been there. Not only is she a fantastic writer, but she's also prolific, so you'll have plenty to wave your wand at once you're hooked on this story. – Thomas K. Carpenter

She hurtled through the forest, clinging to a thick vine. The bright, lush canopy of Letum Wood flew past her and pulled strands of strawberry-blonde hair from her braid. Flames flickered ahead of her near the forest floor.

Sanna grinned. Right where she expected them.

A childhood of swinging through the trees had given her an instinct for gauging how long she could hold on, and this vine's arc would end on a sprawling branch twice as thick as she was tall.

Sanna unwound her foot from the vine, transferring all her weight to her hands, and braced herself. Seconds later, she landed on the mossy branch without falling off the other side—which had happened often enough in the past.

For a moment, she stood on the branch, gazing down at the intermittent bursts of fire below. Witches weren't supposed to cross the dragons' border without a trained Servant unless absolutely necessary. She'd promised Daid years ago to obey the rule after she'd nearly dropped onto old Helis, a grumpy gray dragon who blew fire in defiance of the rule.

Then again, she wasn't exactly on dragon territory. In it, sure. If she never set foot on the ground, she'd never break her promise.

Because they didn't own the trees.

A high-pitched shriek echoed from nearby, followed by another snort of flame.

"Don't fight over me," she called, looping the vine around a smaller branch to use later. She used natural handholds in the trunk to work her way farther down. This tree, like most trees in this part of Letum Wood, was wide enough to fit at least two houses inside the trunk with room to spare.

The bright spurts of fire calmed. Two young dragon heads popped around either side of a younger tree—its span as thick as only one house. Hints of color glimmered in the dragon hatchlings' ebony scales. Sanna stopped and crouched when she reached two tangled branches. The youngest hatchling, Rosy, spread her wings and bent all four legs, readying herself to fly toward Sanna.

Sanna threw out a hand. "No! Rosy, you know the rules."

Rosy paused, then relaxed her wings with a little huff. A flying dragon was a dead dragon. Rosy knew that but constantly tested the rules.

Rosy snorted smoke. At ten years old, hatchlings could only breathe about thirty seconds of fire in a day. Rosy always used hers up by mid-morning. She was the smaller of the two, but feisty, with rose-pink threads twisting through her black scales. Rosy hopped across the space between the trees, snapping her baby teeth, which spanned the length of a hand, at Sanna's bag. Sanna didn't have to dodge—Rosy never actually bit her.

Sanna held up a finger.

Rosy's older brother, Junis, sidled up next to his sister. At twelve years old, Junis was still considered a hatchling, though both of them already loomed over Sanna. Rosy roared, exhaling another flash of smoke, then nudged Sanna with the end of her snout.

Sanna yanked a toad from her bag and tossed it to the right. Rosy flailed to the side to catch it, slipped on a pillow of moss, and slid off the branch. With a quick movement, Sanna grabbed Rosy's foreleg and yanked her back. The scales sizzled against Sanna's palm until she released her.

Junis purred, ears lowered as he gently pressed his nose into Sanna's leg. Slivers of charcoal gray wound through his ebony scales. She set a dead toad at his feet.

"Always so polite, Junis. Thank you."

Bones crunched as the dragons chewed, squelching blood through their teeth. A low, barking sound came from below. They peered over the branch. Cara, their mother, and Viridis, a lithe dragon with emerald in his black scales, circled each other. Viridis was the sneakiest dragon that Daid fed. She'd only glimpsed him a few times in the last two years.

The timing made sense. Dragons never mated for life—just for a hatchling—and the end of summer rapidly approached. A tug on Sanna's shoulder drew her gaze away. Rosy had Sanna's lion-skin bag in her teeth in a not-so-stealthy attempt to steal the final toad.

Sanna wrenched it back. "Hey! This toad's for your mam."

Rosy purred, lowered her head, and inched closer. Sanna grabbed another vine and slid down to the last branch before Rosy could take it.

When she landed, Cara's and Viridis's heads were level with her perch. Viridis loomed more than four times taller than Sanna, his body hot as hellfire. Hints of emerald cascaded down his regal neck like fog. Two thick horns stuck out from the top of his head—bigger than the horns of any other male in the brood. The air shimmered against the dragons' heat. Sanna pressed a hand to her heart and bowed her head.

Cara released a warm breath. Viridis slipped away with a growl, his slitted eyes like yellow moons. A forked tongue flickered between his black lips just before he snapped in her direction and disappeared.

Well … some of them.

Sanna pulled out her final toad. "I'd never forget you, Cara."

Before Cara could take the treat, a shriek shattered the calm air. Both Sanna and Cara whipped around to find a mangy forest lion clinging to Junis's back. Junis whipped back and forth in an attempt to throw the lion off, but it had sunk its talons into his scales, drawing ribbons of blue blood. Rosy screamed.

Junis rolled off the tree branch, plummeting to the ground. At the last second, he spread his wings, slowing his fall. Rosy leapt down the tree, landing with a thud on the ground. A second lion dropped from the canopy, toppling her before she could reach Junis. It pinned her left wing and snarled.

"Hey!" Sanna cried, shucking her bag off. "Get away from them!"

Cara screamed as she raced toward Junis. A third lion sank its teeth into Rosy's right shoulder. She threw her head back and yelped. Three more lions waited in the branches above while two descended the tree trunks using their razor-sharp claws. Forest lions always hunted in packs—there could be as many as ten.

Sanna sprinted down the branch and launched herself off with a battle cry, landing on the back of one of the lions attacking Rosy. She tangled her fingers in its mane and jerked. The lion roared and sprang onto his hind feet. Sanna leaned back, and they both fell. Air rushed out of her lungs when the lion landed on top of her.

Pain spiraled through her ribs with a crack.

The lion scrambled free, scratching her leg. Sanna rolled onto her hands and knees. Black dots clouded her vision as she gasped, ribs paralyzed. Just as a tingling sensation swept over her body, her paralysis broke. She sucked in a deep breath, clearing her sight. To the left, Cara whipped her tail, knocking four lions away from Junis, who dodged beneath his mother. Rosy flopped into the bushes with a scream as a lion charged her.

Sanna scrambled back to her feet, cursing. She snatched the lion's coiling tail as it ran by and pulled. The beast spun away from Rosy, snapping its pearly fangs. Sanna ducked as she released it. The lion's teeth bit the air a breath shy of her arm. She clawed through the undergrowth, seeking a rock just as another lion dropped onto the ground next to her.

"Mori!" she cried and slammed a rock into the lion's jaw. It yelped and darted away. Then a lion feinted toward Rosy, and Sanna threw the rock at it. "Fire, Cara! Use your demmed fire."

Cara threw her head back and roared but issued no flames. The furious beasts swarmed her, biting at her wings and feet—and Junis. They yowled when they felt Cara's heat and jumped away from her roasting scales and swinging tail.

Sapphire blood bubbled from Rosy's shoulder as she cowered in the crevice of two roots, crying.