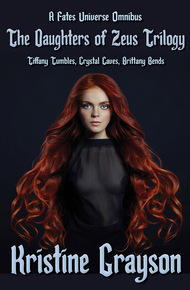 The Daughters of Zeus Trilogy by Kristine Grayson

When Zeus tried to use his teenage daughters Tiffany, Crystal, and Brittany to destroy true love, they rebelled. So, he stripped them of their magic. Now they live with their mothers in "the real world."

But magic cuts both ways; it can provide enormous power to any mage who knows how and when to use it, and it can backfire when used without the guidance of wisdom. This trio of Olympian offspring decide to take the on "real world" and reclaim their magic, one way or another.

Recently fired from her job as an Interim Fate, one of the most powerful people in the world, Tiffany VanDerHoven must move in with her mother in Eugene, Oregon. Tiffany finds living without magic hard enough, but high school? Not even movies or TV prepared her for that.

Tiffany has tumbled into "the real world," and it baffles her.

Tiffany needs to face her future, but first she must decide what kind of future she wants. One with her crazy magical Greek God family? One in the "real world"? Or can she discover the strength to straddle both worlds?

Crystal's mother calls her "The Unexpected Consequence of a Momentary Lapse of Judgment." Her half-brothers call her "The Unwelcome Visitor" because they didn't even know she existed until a few months before. Her stepfather doesn't even speak to her.

Brittany misses her sisters—and her magic. After being fired from her job as Interim Fate, Brittany finds herself living with her mom and stepfather in someplace called Superior, Wisconsin. Oh, and her eight half- and step-siblings live there, too.

Eleven people, one house, and a whole lotta new things to learn about. Things like snow and sunburn and, well, being mortal.

But that might prove harder than she thinks. Because Zeus wants his daughters back. Three of them, anyway. The three former Interim Fates: Tiffany, Crystal, and Brittany.

Tiffany and Crystal already made their choices. Now Brittany must decide whether she will fight for what she really wants—if she can even figure that out—or bend to the will of her powerful father and the allure of magic.

I've known Kris Rusch for over a decade now (Kristine Grayson is one of her many pennames). I first met her as a student at one of her workshops, then I got to know her more as a fan of her work. She's one of the smartest and most hardworking writers I know, and just about everything I know about craft, I learned from her. When I put together this bundle, I knew I wanted one of her stories. I know you'll enjoy her work as much as I do. – Thomas K. Carpenter

I've always felt sorry for the Interim Fates. They first appeared in Simply Irresistible, when Dexter Grant went searching for the real Fates, and found three teenagers instead.

The girls were in over their heads, deliberately so, because their father, Zeus, wanted to get rid of the Fates (and their control of magic) altogether. The Interim Fates got demoted at the end of the Fates trilogy and sent to live with their very human mothers.

I had to write those stories. In fact, I did write them as soon as I could.

The problem was that my previous six Grayson novels were marketed as romance and the book about these three girls aren't romance. They're pure fantasy.

But fantasy of an odd kind. Instead of gaining magic, all three girls—once in charge of the entire magical universe (ineptly, but in charge)—had lost their magic. The Powers That Be decided that the girls had to grow up a bit before they could have such power at their fingertips.

In my novels, I crash fairy tales into Greek mythology, throw in some Norse gods, and add a few superheroes as well. My imagination is untamable that way.

But sometimes it has discipline. Sometimes it finds the "real" events useful. (If you can call what happens in the myths, legends, and fairy tales "real events.") The Zeus of myth was a letch. He slept with pretty much every female he could. Even before the era of #MeToo, it was completely clear that not every sexual encounter Zeus had was consensual.

There's nothing pretty about Zeus and his relationships with women, in the actual texts. He abuses his wife, has more mistresses than he can count, and has more one-night stands than anyone else in literature, as far as I can tell.

And he has a lot of children, some with mortal women and others with mythological creatures.

So I took that Zeus, and moved him into my novels about his daughters. I figured Zeus would never change. Which meant that these teenage daughters of his all had human mothers, who caught Zeus's eye somewhere. In my crazy skewed universe, Zeus even had a way of dealing with the abundance of magical offspring. He let others (magical) raise them, and had their mothers visit annually.

But once these girls lose their magic, they have to live in the non-magical world. So they need to learn how to live without magic in a world without knowledge of that magic.

And, worse, I think, for the three of them, they had to be separated for the first time in their lives.

From my perspective, the events that happened to Tiffany, Crystal, and Brittany in the Fates trilogy were simply the spark that starts their real stories. This trilogy, the Interim Fates trilogy, focuses on their lives, how they reconcile themselves with the losses they've experienced, and the new worlds they find themselves in.

Tiffany goes to Eugene, Oregon, to a mother who is herself a bit of an outsider. Crystal ends up in Manhattan in one of the poshest areas in the United States. And Brittany becomes part of a large family in Northern Wisconsin, in one of the poorer areas of the country.

Their stories work as a unit, but each stands alone.

I was happy to write these. I had felt as if I had left the poor Interim Fates hanging in limbo, with great big unsolved problems.

These books allowed me—and the girls themselves—to solve those problems, and come to terms with their horrid father and the women who found themselves in his orbit. The lack of magic is only the beginning. The real magic comes in the middle when…well, I'm not going to spoil this for you. Go ahead. Start with Tiffany, because in the world of the Interim Fates, she always speaks first.