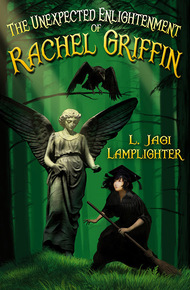 She has published numerous articles and short stories. She also has an anthology of her own works: In the Lamplight. She also edits for Superversive Press and teaches The Art and Craft of Writing.

When not writing, she switches to her secret identity as wife and stay-home mom in Centreville, VA, where she lives with her dashing husband, author John C. Wright, and their four darling children, Orville, Ping-Ping Eve, Roland Wilbur, and Justinian Oberon.

The Unexpected Enlightenment of Rachel Griffin by L. Jagi Lamplighter

Roanoke Academy for the Sorcerous Arts – A magic school like no other!

On her first day of school, Rachel Griffin discovers her perfect memory allows her to see through the spell sorcerers use to hide their secrets. Very soon, she discovers that there is a far-vaster secret world hiding from the Wise in precisely the same manner that the magical folk hide from the mundane folk. When someone tries to kill a fellow student, she investigates. Rushing forward where others fear to tread, Rachel bravely faces wraiths, embarrassing magical pranks, mysterious older boys, a Raven that brings the doom of worlds, and at least one fire-breathing teacher.

Described by fans as: "Lovecraft meets Narnia at Hogwarts", The Unexpected Enlightenment of Rachel Griffin is a tale of wonder and danger, romance and heartbreak, and, most of all, of magic and of a girl who refuses to be daunted.

Curiosity may kill a cat, but nothing stops Rachel Griffin!

Jagi is the other half of the brilliant Fantastic Schools Anthology series. She also tells some pretty damn good stories of her own in her Unexpected Enlightenment series. I love the addition of Lovecraftian horror to the magic school genre as if she's channeling a bit of R.L. Stine. – Thomas K. Carpenter

Once there was a world that seemed at first glance much like other worlds you may have lived in or read about, but it wasn't…

Chapter One: The Unexpected Benefits of Remembering

Even among the Wise, animals did not talk.

These two were talking.

Rachel Griffin awoke in her bunk bed in prestigious Dare Hall. It was her first night at Roanoke Academy, her first night in America, her first night away from home. The other girls in her dormitory room were asleep. She could hear their rhythmic breathing. Yet she distinctly heard voices. She opened her eyes and sat up.

The tall, arched window was open. A chill blew in through it. On the windowsill sat an enormous raven, jet black with blood red eyes. The raven addressed the familiar that belonged to one of Rachel's roommates. The girl must have been a fan of the new fad of shrinking wild animals and turning them into cute playthings. Her pet was a tiny lion the size of a house cat.

The raven croaked harshly, "You are not supposed to be here."

The lion sat regally beside his human, who lay sleeping across the room, on the bottom bed of the other set of bunk beds. "I was called. Where I am called, I come."

"None of my people called you."

"You called one of my daughters. I am always in her heart."

"You need to depart."

The lion yawned. It turned in a circle three times and settled down to sleep.

The raven cawed raucously and flew away.

But then, Rachel Griffin never forgot anything.