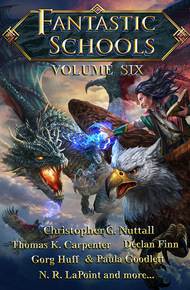 Have you ever wanted to go to magic school? To cast spells and brew potions and fly on broomsticks and—perhaps—battle threats both common and supernatural? Come with us into worlds of magic, where students become magicians and teachers do everything in their power to ensure the kids survive long enough to graduate. Welcome to ... Fantastic Schools.

Meet a student who discovers the hard way what happens when he is transformed into a monster, another who mixes magic and music to remarkable effect, a student who wants to trigger a magical industrial revolution, an assassin posing as a tutor with a mission he cannot deny, two students who have to learn to work together – or else – and a student who starts her school newspaper and discovers a conspiracy that strikes at the heart of a proud institution …

The Fantastic Schools anthology series, dreamed up by Christopher Nuttall and L. Jagi Lamplighter, is a must-have for fans of the subgenre. I should know, I have stories in both this volume and the first. When Christopher reached out and asked me if I wanted to contribuite, I said yes right away, because I knew he and Jagi would put together a fantastic anthology. – Thomas K. Carpenter

Becoming an eldritch horror wasn't my fault. I made the wrong person angry.

It was the anniversary of the day that Squanto defeated the wendigo using only his cunning and a knife. Four hundred years to the day. It should have been a good day. Instead, I was a lump of protoplasm, eyeballs, and teeth. I had been turned into a shoggoth.

Transmutation spells took a lot of raw talent and power. The person I angered? An upperclassman who had recently transferred to Hudson River Academy and who just so happened to be the best at transmutation in the school unless you counted the teachers. The worst part about it was that I had no idea how I was going to get changed back into human form.

Horrors and abominations were exterminated on sight. Going up to someone and asking for help would likely make me dead. A ruptus spell into my gelatinous mass, or worse, would be the immediate reaction. And, actually, could I even talk?

I opened one of my many mouths. At least, I thought I did. It took a moment of concentration and two teeth-filled maws finally opened on the surface of my mass. I tried to say "help" but all that came out was gibbering nonsense. That completely eliminated the idea of asking for help.

Several of my eyeballs blinked, and I realized I was very hungry.

I was in the kitchen and most of my eyes were locked on to the many foods that were lying around just waiting to be eaten. All at once, I saw the counters and the ovens, the platters of food, refrigerators, hanging pots and pans, and the sets of doors leading out, and the door to the storage room.

How was a small blob supposed to move?

Willing myself forward did no good. Only a minute ago, I had arms and legs. I tried to reach forward. A long, inky, purple pseudopod shot out from my body and slapped the floor. I tried reaching again, and two more lengths extended and felt at the floor.

A moment later, I was able to get my lumpy, eldritch body to surge forward. My semi-liquid form moved where I wanted it to, reforming and adjusting as it went. I bumped into a counter. High above, the food waited, calling to me. Apparently, transmutation spells inflict a powerful hunger on their victims.

Revenge would have to wait.

I felt at the counter with two pseudopods. The leg of the furniture was a slick metal, but I could feel the pores and imperfections. With some effort I was able to slide up to the top of the counter, using the tiny holes and scrapes as handholds. My dozen eyes opened wide at the sight of the food. More mouths formed and opened in anticipation of the feast laid out before me.

My body slid onto a platter of what had once been a whole chicken. The banquet on the counters was leftovers from lunch. I didn't care. My stomach (did I still have one of those?) was rumbling. Or maybe that was just all of me shaking and protesting in hunger.

I reached for a chicken leg and absorbed it. With more concentration, I was able to hold the next one and bring it to a waiting mouth. The rest of the chicken was devoured in seconds.

Then I heard the sob.

The girl! I had completely forgotten about the girl!