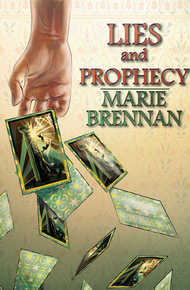 Marie Brennan is a former anthropologist and folklorist who shamelessly pillages her academic fields for inspiration. She recently misapplied her professors' hard work to The Night Parade of 100 Demons and the short novel Driftwood, and together with Alyc Helms as M.A. Carrick, she is the author of the Rook and Rose epic fantasy trilogy, beginning with The Mask of Mirrors. The first book of her Hugo Award-nominated Victorian adventure series The Memoirs of Lady Trent, A Natural History of Dragons, was a finalist for the World Fantasy Award. Her other works include the Doppelganger duology, the urban fantasy Wilders series, the Onyx Court historical fantasies, the Varekai novellas, and over seventy short stories, as well as the New Worlds series of worldbuilding guides. For more information, visit swantower.com, her Twitter @swan_tower, or her Patreon at www.patreon.com/swan_tower.

Lies and Prophecy by Marie Brennan

There are three kinds of lies: lies, damned lies, and prophecy.

Kim never had to wonder what to major in at college. Her talent for divination made her future clear in more ways than one. But there are limits to what even a gifted seer can predict, and no card reading or prophetic dream can prepare Kim for what's to come during her junior year at Welton.

Something has taken an interest in her friend Julian — an unseen force neither of them can identify. What starts as a dark omen quickly turns dangerous, as Julian finds himself under attack. To defend him, Kim will need more than her strengths; she will have to call on a form of magic she has never been able to master. If she can't learn fast enough, she may lose her friend forever.

Kim knows she isn't ready for this. But if she wants to save Julian — and herself — she'll have to prove her own prophecies wrong.

I first became aquainted with Marie's work from her short stories and novellettes featured in Beneath Ceaseless Skies. I was enchanted by her lyrical tales which stuck with me long after reading them. When I was looking for magic school stories, I was delighted to find out Marie had a novel for the bundle. – Thomas K. Carpenter

The stacks of Talman Library were standard college issue, which meant they were gloomy and full of shadows, the perfect setting for a creepy suspense flick. Despite the atmosphere, though, I liked Talman. The musty scent of books reminded me of home, and my parents' library room.

I could find my way to the divination section blindfolded, but had to check the map for the ceremonial magic shelves, when I went after class the next day. They took up most of the fourth floor, row after row of books: mostly recent works, but also some pre-Manifestation antiques, useful mostly for historical interest, but occasionally applicable to modern magic. I trailed my hand down a row of spines, fingertips tingling with the faint psychic traces left behind by previous readers. Sometimes those helped me understand the texts. I could use their aid now.

The section I wanted was small, just two shelves near the floor. I spotted the familiar blue spine without having to check call numbers, and pulled it out. The old alchemical symbols for the elements decorated the cover. I wondered, as I stuffed it into my bag, whether I was making a mistake. Revisiting the past might not be my brightest idea ever.

This time when the hairs rose on the back of my neck, I anticipated the cause. I rose to my feet just as Julian walked by in the main aisle. He saw the movement and turned to face me, robbing me of the fun of startling him in revenge. "Hey," I said, coming forward, so Julian wouldn't look at where I'd just been, and wonder what my interest was in childhood CM pedagogy.

"Kim," he said in greeting, and scanned the shelves around us. "Extra research already? Or an assignment from Grayson?"

"Just being prepared. What about you?"

A nod of his head, toward the back of the building. "Theories of power containment." He paused, then said, "You're going to be fine, Kim."

It stopped me dead. I blushed, staring blindly at the shelf to my right. "Am I that obvious?"

"Midway between Liesel and Robert, I'd say."

Meaning one would notice, the other would not. I didn't need Julian to tell me I was an open book to my roommate; Liesel had made that clear in Dusseldorf. "I just . . . this is new to me." Which was a lie, but I made sure my shields were good before I said it, and crouched to scan a bottom shelf, so he couldn't see my expression.

Julian either believed me or was willing to let it pass. "Most things are, when you start learning them. Though I guess divination was different for you."

"Not like this," he said. "You've got a natural talent for divination—a strong one. One of the strongest I've seen."

Stronger than a wilder's? But they tended to be good at everything, not great at one thing. Still— "I'm not that good. Not in the same league as, say, Madison, or Bradley."

"They're professors; they have more experience. But give it time."

He was standing close to me, now, and I didn't quite trust myself to look up. The flattery was a nice boost for my ego, but it only made me dwell more on my difficulties with ceremonial magic. I reached out to grab a book, to cover my embarrassment, and realized just in time that I'd been staring at a row of Arabic-language texts. Sighing, I pulled my hand back, and tilted my head inquiringly toward the exit. Julian shrugged agreement and followed. "Yeah, well," I said. "I'm not spending much time on divination this term—Historical Tarot on Fridays, and that's it, other than Div Club. Assuming I even have time for meetings. How about your schedule? What have you been up to today?"

"Combat Shielding this morning, Power Reservoirs in the afternoon. You?"

And I thought my schedule was ambitious. If I didn't miss my guess, both of those were grad-level courses. Julian, with years of training behind him, had tested out of the basic requirements and gone onto bigger things. "Sheffield's class and CM."

We reached the circulation desk. I slid my book across face-down, so Julian couldn't see the title. "What did you think of Grayson?" he asked.

"She scares the crap out of me," I admitted. "But it's weirdly reassuring, in a way. I honestly believe she could do the basics she's teaching us in her sleep. And I like her style. Very simple, no flashiness or wasted time." To Robert's eternal disappointment.

Julian nodded, leaning against the desk, facing away from the student there. "That's because she was a Guardian."

The word sent a thrill down my spine, which I tried to hide. Guardian. I'd grown up on the same stories everyone else had, outrageous action flicks wherein the hard-bitten, lone Guardian single-handedly defended New York City against some sorcerer's unleashed demon. Then I'd looked further, into the reality, which was more like the magical equivalent of an EMT. Not as glamorous, but a lot more useful.

And a dream that wouldn't let me go.

But you needed a strong background in CM to qualify. At present, I wasn't even within spitting distance. Hence the book in my bag, and my schedule for this term.

"How do you mean?" I asked Julian as we went out into the bright sunlight. Our nice first-day weather, a day late. "Do they teach Guardians to work like that?"

"Teach, no. It just happens. They usually work under pressure, so they don't waste time on a fancy personal style. After a while, they strip everything down to the bare necessities."

"To them, and past," I said. "I swear I saw Grayson cast a circle at the end of class with about half the usual process."

Julian's eyes weren't on me. They rarely were. "She's strong. That's part of why she can do it that way. Most people don't have the power to operate on a reduced procedure. But it's strength of mind, too, as well as strength of gift. New Guardians have trouble, until they're in a situation where they have no time for the full thing. Then they cut it down, because they have to."

Strength of mind. I bit my lip, thinking. How much could it make up for lack of gift?

By the end of this quarter, I'd have my answer.

As usual, our fellow students—with varying degrees of subtlety—were giving Julian, and therefore me, a wide berth. He watched them out of habit, but I'd learned to read his body language, in the absence of the usual empathic cues. His attention was on me. Which was not where I wanted it, not while I was thinking about something so personal. What had he been talking about? Stripped procedures. "Sounds good to me," I said. "Robert may want to be the next de la Vega, but I like Grayson's way better."

A faint smile touched his lips. "Yes," Julian said, "I think Grayson's the right teacher for you."

Because she'd train me, or kill me trying. I sighed. "I guess I'll find out."