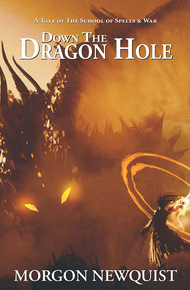 After starting life by causing an international incident in South America, studying a dead language in college, converting to Catholicism, and spawning a number of children, Morgon Newquist now write books.

Most of the time. When she's not chasing chickens, homeschooling aforementioned spawn, or playing video games that she never seems to finish.

Morgon has been writing all her life. Books and stories are her first love, and she's really lucky to be able to spend her time writing. And she's even luckier that people like you, dear reader, pick them up and enjoy them.

Morgon is the author of the School of Spells and War short story series, the Serenity City Superhero series, and the Neighborhood Watch fantasy series. You can find her on Amazon and Twitter.

Down the Dragon Hole by Morgon Newquist

Alis was a quiet librarian at the campus library of the School of Spells & Magic - that is, until the sword-wielding buffoon Cahan had the audacity to battle a dragon in her library! Now she's following him off on some foolhardy adventure. As they try to save the university from the mysterious Formless, she fights an equally important battle - to maintain her self-respect!

The School of Spells & War is an ongoing collection of old fashioned sword-and-sorcery adventure stories following a wizard and warrior duo as they galavant across the continent of Thillon. Good-humored, powerful warrior Cahan and intelligent, skilled wizard Alis work together to serve their university, the school of spells and war, by battling dragons, investigating plots against the king, hunting witches, and dealing with the ongoing threat of the ancient and mysterious Formless.

Morgon is another writer I became acquainted with from the Fantastic Schools Anthology. Her series is good ol' fashioned sword-and-sorcery, which we don't see enough of these days. Like you, I'm ready for a rollicking tale of misdeeds and misadventure on the continent of Thillon. – Thomas K. Carpenter

A sword-wielding buffoon stood atop the library shelves again. Alis didn't immediately notice the brute, as this had become an annoyingly common occurrence. The shouting did it, though. Libraries were quiet places, although wizard libraries were less quiet than other libraries. But the loud booming voice of a bulky man shouting about the God of War and Victory stood out over the rest of the noise, even if it took Alis a moment to notice it.

Alis made an irritated noise under her breath and reluctantly turned away from her tome to scold him. Honestly, she didn't know why they allowed such men into the Library. They never used it correctly, anyway.

"Sir," she called out, only a little polite. He did not acknowledge her. Alis sighed and stood up. This was ridiculous. She was a librarian. She had better things to do than deal with this.

He didn't seem to hear her. He waved his sword around his head, trying to get the attention of the various wizards around him. They ignored him—as they should have. Wizards shouldn't have to interrupt their research for him.

Sighing again, even louder this time, to make sure that all the students could see how put upon she was, Alis stood up and stalked over to the warrior.

She couldn't see his face well, but he wore a full set of scored and worn leather armor, with dull chain mail beneath it. His ability to scale up the library shelf so quickly impressed her, but she squashed the thought. Standing on a bookshelf was still uncultured and disruptive, no matter the talent it took to get there.

"Sir," she repeated, now that she stood at the bottom of his shelf. This time he heard her and turned to look down at her. He had a bearded and handsome face, with blue eyes and shoulder length wavy brown hair.

Of course, he's handsome, aren't they always? Do they even let ugly men join the ranks in the barracks downstairs? Rather than appreciating his appeal, she dismissed it derisively.

"Aren't you listening? You need to get out!" He shouted down at her with authority. She ignored her body's instinctual response to obey him immediately. He had obviously commanded troops before; he knew how to make people listen. But she wasn't going to listen.

Now the other people in the library took notice of the encounter, and some of the younger students looked nervous.

"Sir, I'm going to have to ask you to get down!" Alis put her hands on her hips and hoped she looked sufficiently disapproving. Many of the elder librarians could end shenanigans with only a glare. She hadn't quite mastered the skill yet.

"I will not," he answered calmly. Her attempt at sternness did not move him at all. One of the young sorceresses near him giggled. Alis' cheeks blazed with embarrassment, and she idly considered blowing him off the shelf with a wind spell. Would she get in trouble for that? She didn't know, so she fell back to lecturing instead.

"This is ridiculous! People are trying to do important work here, and you are distracting them with your crazy fantasies—" She didn't get any further before a terrible rumble boomed from the library's large stained-glass windows.

Alis covered her head and scrambled behind a bookcase, large chunks of stone hitting the floor around her. Library patrons screamed and fled, many of them throwing up protection spells to avoid falling debris.

For a moment, all Alis could think about was how stupid she looked.

It's just my luck the one time I deal with one of these barbarians, he was right! And in front of the entire library! She swore under her breath, her cheeks growing even hotter in humiliation. I'll never live this down!

But as the dust cleared, and she found herself face to face with a dragon, none of that mattered anymore.