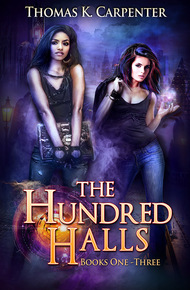 Thomas K. Carpenter is a full-time urban fantasy / magical academy author. His bestselling, multi-series universe, The Hundred Halls, has over 28 books and counting. His books focus on fantastic families, magical academies, and epic adventures. All the books can be found at major retailers and directly from the author at https://thomaskcarpenter.com/. In addition to his extensive novel publishing, his short fiction can be found at Galaxy's Edge, Audible Plus, and Ellery Queen's Mystery Magazine, among other places. He's also edited multiple anthologies and written tie-in fiction for gaming companies. He lives in Buena Vista, Colorado.

A spellbinding fantasy box set about power, dark magic, and the bonds of family.

Aurelia Silverthorne is determined to attend the world's only magical university – but life at the Hundred Halls is even more deadly than the trials to be accepted.

In the past six years, I've published 28 novels and a dozen short stories in my Hundred Halls Universe, which is about the only magical university in the world. I recently finished Season One and I'm currently working on the newest series of Season Two of the Hundred Halls. If you like vast story lines about fantastic families, magical academies, and epic adventures, I might have a few stories for you. – Thomas K. Carpenter

No one had died today. In fact, no one had died in the last seven days. It was the longest stretch since Aurie had joined the fourth-floor team as an orderly, which made it a joyous event, and simultaneously a superstitious one.

Aurie dodged around the Jell-O cart, skidding to a stop outside room 438. A sign in big red letters read "WARNING. No perfumes, magical ointments, or any alchemy reagents within thirty feet."

She gave her aquamarine scrubs a voracious sniff. While she'd washed her scrubs by hand that morning, using a plain soap bar in the shower, and used talcum powder for deodorant, Aurie was worried she'd picked up hitchhiking scents on the crowded train ride.

The only smell she detected was her mild body odor mixed with the talcum, so she went in.

An emaciated girl on the bed lit up. "Awesome Aurie!"

As she stretched her arms out, the dozens of wires connected to her limbs from scaffolding around the bed quivered.

"Elegant Emily," said Aurie, leaning over to give a hug, careful not to break a wire.

Aurie hid a grimace as she realized how thin Emily had gotten.

Emily put up a brave face. Suddenly, the car noises in the street outside quieted. Aurie could feel her heart press against her chest.

"I heard the doctor tell the nurse that she's out of spells," she said, staring at her bone-thin hands.

"I'm sure that's not true. There are always more spells. The doctor probably meant that she's out of spells, and needs to learn a few more to treat you," she explained.

Aurie reached in her pocket and pulled out a painted miniature about two inches high. The figure wielded twin scimitars in a fighting pose with the suggestion of winds swirling around her.

"It's you. A wind dancer," said Aurie while she tucked a strand of errant blonde hair behind Emily's ear.

"There's no such thing as a wind dancer," said Emily.

"You can be the first then, and have your own hall," said Aurie.

Emily offered a bittersweet smile as she cradled the miniature as if it were a puppy. The poor girl had been cursed by a vengeful air elemental to be near weightless. The wires kept her from floating to the ceiling. Without gravity acting on her body, she was wasting away like an astronaut in space for too long, and the airiness of her body made her susceptible to allergens.

Aurie squinted to bring the details into focus. She'd had a friend paint it for her, but hadn't had a chance to study it.

"Yeah, I guess she has my olive skin and dark hair. I don't see any freckles, though," said Aurie.

"Or those dark circles," said Emily, touching Aurie's cheek below the eye.

"Sleep's overrated," said Aurie reflexively. She'd worked the night shift at a convenience store on the outskirts of Invictus. "Hey! Maybe this means I'll be your first student at the Hundred Halls."

Emily shook her head with faux indignation. "That's silly. You have your Merlins tomorrow." Then her eyes went wide as if she'd said something wrong. "I...I need the nurse," she said suddenly, jamming the call button.

"What's wrong? Are you okay?" asked Aurie, examining Emily for signs of danger.

The hard soles of running nurses echoed in the hallway. Aurie spun around expecting an emergency team only to find the doorway full of smiling people: doctors, nurses, orderlies, the rest of the patients—the kids.