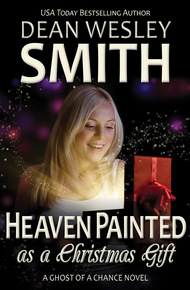 Heaven Painted as a Christmas Gift by Dean Wesley Smith

But as the holidays approach, both groups face a challenge with higher stakes than either can tackle alone.

The Ghost Agents, including newly dead recruits Belle and Nancy, team up with Poker Boy and his team to stop a deadly threat—and save Christmas.

Also one of the Christmas Eve gang who read new stories to each other, has been my friend since about 1982. Not only has he written in just about every genre, he's also fast (and that means a lot coming from me!). I knew that if he didn't already have a book that would fit the Holiday Fantasy theme, he would probably write one to order. And he did. – Kevin J. Anderson

NO ONE EXPECTS to die. Belle Watson sure didn't. Not on a beautiful November day in downtown Boise, Idaho.

Of course dying wouldn't have been any better on a crappy, rainy day, but this Wednesday afternoon was far, far from crappy. Clear blue fall sky, the leaves on the trees lining the sidewalks bright orange and red, and the afternoon temperature a perfect sixty-five, with no wind. Boise in early November, with the threat of winter right around the corner, didn't get much better, and that made dying just flat seem impossible, especially at the young and healthy age of twenty-eight.

No one dies while taking a day off work to just spend time with her best friend and do some clothes shopping. Not a high-risk kind of activity.

Belle felt and looked good, better than she had felt and looked in years. She had dropped the thirty pounds she had gained from the eight-year horrid marriage to Brad Duncan, the high school quarterback who became the fat, sloppy, mean, self-proclaimed king of drunks.

He had seemed proud that he didn't work much and spent all his time in the Varsity Bar down off old Highway 99. He would see how proud he got when he didn't have her money so he could buy a drink.

She had only been in that bar once and had left in two minutes. It was dirty, smelled of piss and stale beer, and every surface she touched felt slimy. Yet her ex-husband had loved the place.

That alone showed how different they were.

The divorce had now been final for six months and Belle hadn't spoken with the slob in exactly six months.

And with luck, she never would again. To her friends and people at work she wouldn't even give him the title of her "ex-husband." To her he was just "the slug."

Now she had a brand new apartment in the beautiful, tree-lined streets of North End of town, with new furniture and a new red Mercedes convertible. She had also splurged on a brand new wardrobe that fit her thin, five-five frame perfectly and looked and was expensive. She didn't need to worry about money since she didn't need to support the slug anymore and had saved her mother's inheritance.

Besides, her job paid real nice as well. She had managed to finish college and get a masters degree in forensic accounting, marrying the slug as she finished the last of her thesis. Wow, what a mistake that had been. He couldn't even manage finishing two years of college. That should have been her first clue, but in those early years, he still looked like the football jock he had been in high school and could sweet-talk her out of her panties without a problem.

That part of their relationship had ended not long after they got married and she hadn't missed it in the slightest.

Now, on this beautiful afternoon, Belle hoped to improve the already expensive wardrobe some by adding in some fashionable winter clothes.

Belle had her long blonde hair pulled back and felt great walking the wide sidewalk down two blocks from the capital building, her low heals clicking on the pavement. She had been born and raised in Boise and had grown to love the downtown area with all its small shops, older buildings, and tree-lined sidewalks.

Strolling beside Belle was her long-time friend from high school, Nancy Bend. Nancy was also freshly out of a divorce from a worthless idiot who she had supported for years by working at a high-level development job at a start-up computer firm.

Belle and Nancy had gone to college and done their master's work at the same time. Nancy had her degrees in computer technology and could make any computer just get up off the desk and dance. What Nancy did for a job looked like magic to Belle. Nancy said what Belle understood about corporation financing and network systems was flat out magic period.

Nancy had caught the bastard she had been married to sleeping with a waitress from Denny's where he spent most of his days drinking coffee and pretending to look for work.

Nancy hadn't talked to him either in five months, since the moment their divorce had been final. And Nancy had told Belle that sex with her husband had turned sour almost from the start and she didn't miss it either.

Belle and Nancy, after their divorces, had decided they needed to celebrate at least once a month, even though they spent a lot of time with each other normally, by taking a day off in the middle of the week, shopping, having a great dinner, going drinking, and otherwise just letting their hair down, so to speak.

Belle couldn't imagine the world without Nancy beside her. They spent most nights together having dinner and watching movies at one or the other's apartment.

Nancy was three inches taller than Belle, but just as thin. And Nancy also had money from the stock in the start-up firm she had been working at. Nancy had long brown hair that she usually kept up against the back of her head and large, green eyes that Belle loved.

And they made each other laugh. They had needed that laughter a lot over the last few years climbing out of those marriages. Luckily, for both of them, there were no kids involved. For Belle, the idea of having a kid with that slug of a human she had married made her just shudder.

Besides, she and the slug hadn't had sex in years and that had been just fine with her.

Belle and Nancy had been friends for so long, they basically did everything together. They had spent many a night drinking in the old Idanha Hotel luxury bar, laughing and holding each other while they cried and schemed during those years of first separation and then divorces.

And together, they had sworn off all men, which suited Belle just fine.

The November sky was clear, the weather warm, and they were shopping and laughing and enjoying life. Finally, for both of them, life was good again.

Dying was not in either of their plans for the day.