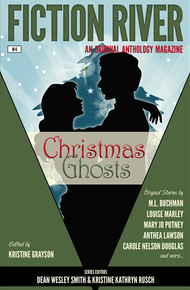 For the fourth anthology in the Fiction River line, paranormal romance writer Kristine Grayson invited a stellar group of cross-genre authors to tell heartwarming stories of love set in the holiday season. From Regency England to modern day Portland, Oregon, ghosts facilitate—or try to stop—true love in the dark at the end of the year. Featuring stories by bestselling authors Mary Jo Putney and Carole Nelson Douglas to fan favorites M.L. Buchman and Anthea Lawson, Christmas Ghosts provides the perfect beginning to the mid-winter festivities.

I don't like most Victorian traditions, but I adore one: The Christmas Ghost story, or as one website calls it, the Yuletide Spirit Story. (Really?) Twenty-six years ago, when I and my writer friends all lived far away from our families and had no money at all, we celebrated Christmas by reading ghost stories to each other on Christmas Eve. We ate well, imbibed a bit, and settled around a fire for snacks and stories. Sometimes the stories were marvelous; sometimes they were laughingly bad. But they made us all feel connected to a time-honored tradition, one that had been around a lot longer than we had.

We got older. We got married (some of us to each other), and moved away. Children entered the picture, and suddenly the holidays became about family, presents, and Santa instead of Christmas cookies, eggnog, and stories told around a fire.

As you can tell, I miss those Christmases. I do not miss the poverty in which we all lived, but I do miss the creativity.

So, when we discussed doing a holiday version of Fiction River, I volunteered immediately with Christmas ghost stories. I also knew I would edit this anthology in my Kristine Grayson incarnation, because romance readers buy many Christmas-related novels and anthologies. We wanted Fiction River to encompass all genres, so why not go for the ultimate umbrella genre itself?

You have in your hands eight happy endings. Some of you who've traveled here from other genres now wonder why I went and spoiled all the endings for you. Romance readers are smiling. Because romance isn't about the ending. It's about the journey.

There are as many romance stories as there are couples. Ask any happily married couple how they met, and you'll hear the origin story of the relationship, an origin story unlike any other you'll ever hear. Falling in love is personal, and it's different, even if one of the parties has been in love before.

I have written and published in every fiction genre except military fiction (at least that I can think of), and let me tell you this: Contrary to popular opinion, romance is the hardest genre to write. When I teach romance courses, I compare romance writing to writing poetry. Most fiction writers write the equivalent of free verse—anything goes. But romance writers write sonnets. They follow strict rules, and produce wonderful stories.

Ask any professional writer to write a romance and that writer will fail on the first few attempts. I was very careful in the writers I chose for this anthology. All of them have successfully written romance before. I wanted to make sure they could handle two more rules: Christmas and a ghost.

For her subgenre, Louise Marley chose historical. "The Farewell Gift" takes place just after World War I. That war is called the first modern war, and its devastation was profound. She touches on that and so much more in this sweet story of survivors after a dark time.

Dean Wesley Smith's subgenre is time travel. Time travel romances had their heyday in the 1980s, although they continue even to this day. Dean adores time travel, which is why he edited Fiction River's third volume, Time Streams. He sees the possibilities of love throughout the ages when he looks at all of time, and he communicates that here.

Time travel has a place in Lisa Silverthorne's "Christmas, Interrupted," but she also dabbles in a bit of romantic suspense as well. Her story, full of what-might-have-beens, also conveys a strong sense of holiday joy.

M.L. Buchman writes military romance which is, for those of you who don't know, one of the most popular subgenres of romance. He has written a stand-alone gentle contemporary in his Night Stalkers series, which features more than one romance and the possibility for more than one happy ending.

When I asked Mary Jo Putney to contribute a story to the anthology, I thought she would probably write a Regency. She's written some of the classics in that romance subgenre. Instead, she wrote a modern story set in her popular Guardians universe.

"Toasted" straddles the place that confounds critics: Is it urban fantasy? Is it paranormal romance? It's both, really, although the ending, in my opinion, places it solidly in the romance camp. Even knowing where the story would end up, I had no idea how we would get there, and found myself turning pages quickly. Just because you know how the couple will end up doesn't mean you know what will happen to the other characters. What happens here is one of the best things about this wonderful little tale.

I decided I would wait to write my own story until I knew what subgenre everyone else wrote in. Initially, I had thought of a Grayson story. (In one of his incarnations, Darius, the hero of Completely Smitten, is the Ghost of Christmas Present, a fact mentioned in passing.) I soon realized that Grayson's brand of weird humor doesn't quite fit here.

So I moved to my romantic suspense pen name, Kristine Dexter. But Dexter's stories don't have a whiff of the supernatural. "Chains" ended up with a much greater supernatural element than I had initially planned. I finally decided the name belonged under Kristine Kathryn Rusch. I write romance under that name, often in the short form, and sell it to unlikely places like Ellery Queen Mystery Magazine. (Shhhh. Don't tell them.) Even so, I still think of this one as romantic suspense.

Carole Nelson Douglas and I share a gene for genre unpredictability. Neither of us has yet found a genre that we can adhere to one-hundred-percent. Carole's story, "Miss Merriweather's Christmas Follies," starts like urban fantasy, then crosses into Regency romance without blinking an eye.

I was so delighted to get Carole's story, because I knew that I would have at least one Regency romance in the volume. Regency is the most difficult romance subgenre for non-romance readers to understand. Carole has one of her characters make the transition from now to the world of the Regency, and in doing so, she adeptly explains how most readers feel when they make that crossing.

If you've never read Regency before, read Carole's story before you read the final story in the volume, "A Countess For Christmas," by Anthea Lawson. Anthea wrote a perfect Christmas Regency, which is (believe it or not) a subgenre of a subgenre.

Regency fans will find two treats in this volume: Anthea's traditional story and Carole's exploration of the quirks of the genre. Non-Regency readers have an opportunity to enter one of the biggest selling subgenres of romance with no real explanation necessary.

It's my sincerest hope that you all will enjoy the Victorian Christmas ghost story tradition as much as I do. And even though I'm writing this introduction in May, let me be the first to wish you the very best of the season.