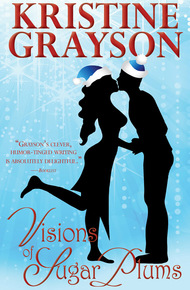 Nissa Kealoha helps control Santa's image—his brand. An Image Specialist with Claus & Company, she helps promote his positive image and deflect anything negative. This year, Nissa finds herself counting the days until she can return to the Greater World to goose holiday donations and remind people about the good Santa represents. Until a man on a mission threatens her holiday plans.

Professor Ryan Palmer possesses the perfect voice in the perfect body. And he uses that perfection to launch an anti-obesity campaign against, of all people, Santa. Or as he sees it, Santa's image. Ryan thinks the mythology of Santa eating cookies and drinking eggnog contribute to the obesity epidemic—one he hopes to help reverse.

Nissa must stop Ryan from tarnishing Santa's image, but when they meet, sparks fly—the magical, person-of-your-dreams kind of sparks. Can Nissa keep her objectivity? Can Ryan let himself believe in the impossible? Can they find their own kind of Christmas magic together?

The man in the elevator had been unbelievably gorgeous. Magically gorgeous. So gorgeous, in fact, that Nissa worried he was a celebrity whom she didn't recognize. She'd met a lot of celebrities who could make themselves look relatively normal with the right choice of clothes, stubble, and a two-day lack of sleep. She used the word relatively, because it was always hard to hide the great facial architecture that a camera loved, blue eyes that suggested a thousand perfect summer days, and lips so kissable that it was hard for a woman—any woman—to resist.

Get a grip, she told herself as she headed down the hall to check in with the producers of the show she privately called Made-up Controversies Are Us. She'd been on the show dozens of times, usually in the holiday season. But she'd become a stable at other times of year, talking about retail sales and unemployment rates—only because she was pretty and articulate and had a tangential connection to those things.

If the producers truly knew who she was, she'd be on the show all the time, while they tried to get the Big Guy as the Big Get. But she used her time to plug Claus & Company, and then to remind people to donate to whatever cause was at the top of the company list that week.

Besides, she liked being the go-to girl when the producers needed something. That meant she could trade favor for favor, and get on the show when she really needed to.

She really needed to this time. She needed to deal with that Palmer idiot before he got any more airtime. She had promised the producers excellent television, so she needed to be focusing on her arguments.

Not on that incredibly handsome man in the elevator.

That was the weird thing: She saw incredibly handsome men all the time. She worked in PR, for heaven's sake, and she was on television daily during the holiday season. When she came to this place, the home of two networks (one a spin-off) spread out over a dozen floors, she saw Everyone Who Was Anyone. The big names were either doing talk shows or long-running variety shows, always here to promote their latest TV series/album/film.

She had shared a table with George Clooney in the commissary and not lost her head over his gorgeousness. (Honestly, in real life, he was a bit too thin—just like most actors. Not because they hated food, but because of that camera-ready thing.)

She had corralled one of Brad Pitt's 800 children, who, Pitt assured her when she brought the kid into the green room, was usually better behaved. She went out onto the loading dock one afternoon and stumbled on Ewan McGregor, smoking. She had been a bit stunned at just how short he was.

The thing about actors, producers, writers, celebrities, was that they were real people and yeah, they might be good on TV or gorgeously airbrushed in the pages of Vanity Fair, but they had a human side just like everyone else. They wore too much cologne or ate with their mouths open or fell asleep and snored in the make-up chair.

Even though she'd met almost all of People Magazine's Sexiest Man Alive honorees (if you wanted to call them that), none of them had hijacked her brain (and other parts) quite like Elevator Guy.

She probably should call him something else in her head. Or at least, try to forget him. Because she didn't even hear him speak. She couldn't quite bring herself to say hello.

If, by chance, he was some celebrity she didn't recognize, then she would seem like Creepy Stalker Fan Girl, and that would make her horribly unprofessional. Right now, on this stupid mission from the North Pole, she felt unprofessional, so she didn't need to do anything to reinforce that sense of herself.

She waved at the receptionist when she reached the part of the floor dedicated to the show. "Can I go in?" Nissa asked, and then proceeded to walk to the back without waiting for an answer. The mark of a permanent guest; no one stopped her when she walked past reception.

Behind the public areas, the halls were narrow, painted a dirty eggshell, and blocked by boxes and other things some intern needed to take care of three weeks ago. She let herself into a relatively large (by New York standards) office overlooking the plaza and its fountain. Tourists milled, hoping they could see celebrities or get into free show tapings, while New Yorkers picked their way past with expressions of great annoyance. She could empathize.

The city always got crowded during the holiday season—particularly in this part, near the skating rink and the big Christmas tree and Radio City Music Hall, all those things Flyover Country had heard about since the Christmas movies of the 1940s.

Caryn Longworth, the executive producer, sat behind her desk. She had a horsey not-camera-ready face filled with intelligence so overpowering that one look in her eyes was terrifying. According to staff gossip, Caryn was related to at least two US Presidents, several senators, and one famous hostess from the days when women didn't serve in Congress. Caryn had the familial political brains, a rabid enthusiasm for government gossip, and a fine-tuned sense of news-as-entertainment.

Nissa loved her. They often went out for coffee together to discuss the day's TV highlights. They weren't quite best friends—neither of them felt like they were in the position to have best friends—but they would have been if they had different jobs.

"Please tell me this idiot professor has canceled," Nissa said to Caryn.

"Oh, Nissie hasn't done her homework," Caryn said with a twinkle that rivaled the Big Guy's. "Our professor is not an idiot by a long stretch."

"I've done enough homework to know that," Nissa said, although she hadn't been able to download any of the shows he'd appeared on. She hadn't had enough time.

"But apparently you haven't seen enough to realize that you better bring your A game," Caryn said seriously.

Nissa felt a half second of panic. Caryn had never said that to her. Caryn, in fact, said that Nissa's B game was better than everyone else's A game.

Caryn was, in some ways, her biggest fan.

"He's here then," Nissa said, pretending to misunderstand her friend.

"Oh, he's here, along with his brilliance, his beauty, and his stellar Q rating."

The Q Score was a metric that TV people in particular used to keep track of someone's appeal to a particular audience. Personalities with high Q Scores got more invitations to appear on television than people with no Q Scores.

"Our professor does have a Q Score," Caryn said. "He had one before he ever went on TV."

"How is that possible?" Nissa asked.

"One of the most popular YouTube videos of all time," Caryn said. "You really haven't done your homework on this one."

Nissa felt her cheeks heat. "I just got assigned this yesterday," she said. "And then I was away from any internet connection. I thought he was just some anti-Santa guy."

"That's what makes him great," Caryn said. "He sounds so pro-Santa while being against everything that Santa does. He sounds like Dr. Oz or somebody, totally concerned with your health while basically saying you're stupid just for breathing."

"Great," Nissa said under her breath. "Too bad Santa can't rebut him."

Santa would destroy him. Charm, charisma, the ability to make someone believe that even the silliest things were possible—that was the true magic of an S-Elf. If only Nissa could get Santa here for one media appearance.

Although, she knew, that would be completely impossible.

Nissa frowned at her, thinking for a moment before understanding the reference. Edmund Gwenn had played Kris Kringle in the original movie version of Miracle on 34th Street. There was quite a back story to the performance. The entire movie existed because of Oskar. Oskar put a bug in the ear of somebody at Twentieth Century Fox to do a movie about the possibility of Santa being real. The movie was having difficulties until, in a very Ghost of Christmas Present maneuver, Oskar took Gwenn to the North Pole to meet the real Santa, all the while letting Gwenn think he dreamed the whole thing.

Santa nearly blew it all by showing up at the Oscars while on vacation. When Gwenn won for his performance, Santa had shaken his hand on the way up to the stage. Now I know there is a Santa Claus! Gwenn exclaimed when he won, and everyone thought he meant that he was referring to the award, when actually, he was referring to the Jolly Old Elf who had just shaken his hand.

"Well, you shouldn't," Caryn said. "You should use that fancy tablet of yours to watch what you're up against. This guy is disarming, and he's funny, and one of the sexiest guests we've had."

"It's not hard to get that appellation on this show," Nissa said, referring to the fact that most guests on Made-up Controversies Are Us were on the political side and therefore were not incredibly attractive by TV standards.

"Still," Caryn said. "You've got less than an hour to prepare."

"Damn straight," Caryn said, "and I'm afraid this guy's going to eat you for lunch."