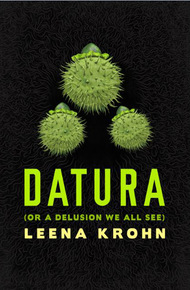 Our narrator works as an editor and writer for a magazine specializing in bringing oddities to light, a job that sends her exploring through a city that becomes by degrees ever less familiar. From a sunrise of automated cars working in silent precision to a possible vampire, she discovers that reality may not be as logical as you think—and that people are both odder and more ordinary as they might seem. Especially if you're eating datura seeds. Especially when the legendary Voynich Manuscript is involved. Where will it all end? Pushed by the mysterious owner of the magazine, our narrator may wind up somewhere very strange indeed.

From the author of Tainaron, a World Fantasy Award finalist. Krohn is one of the most respected Finnish writers of her generation. Translated by Anna Volmari and Juha Tupasela.

A Delusion We All See

I can only blame myself and a certain flower for my current state. Or two flowers, actually.

The first I saw when I was seven years old. Someone had picked some flowers in the garden at our summer house and put them in a vase. The tallest had just opened—incandescent orange with dark leopard spots. The midday sun filled the room and the flower embodied summer lushness. I looked at it and asked my sister what flower it was.

"A crown imperial," she replied.

I couldn't take my eyes off it. I was sure she was right about the name, but I looked at this flower differently than I had at any flower before. A new idea was germinating in my mind, and it made me say, "It might not be a crown imperial."

"It's a crown imperial," she said.

What made me say that? A sudden thought that the flower was unknowable, not just by me, but by anybody, even people who knew its name. But I wasn't able to express this epiphany in a way that other people could understand. I didn't mean that the flower had some other name. What I wanted to say had to do with being, not naming. The name of the flower was something completely arbitrary and beside the point. The flower was not what it was called. Not this flower. Not any flower.

I asked. I was sure that grandma would understand what I thought I now understood.

But grandma also said, "It most certainly is a crown imperial."

Why am I telling you this? Because I then understood that this one flower could not be known, and later I have learned that this same otherness applies to all living things—people, the world, our entire reality. What we are able to perceive—see, hear, smell, and measure—gives us enough information to get by on a daily basis, but too little to understand what everything really means.

Perhaps it was that bit of information that wounded me. Perhaps that was what later made me so vulnerable to seduction by that other flower.

My sister thinks that my bad health is partly due to the people I met while editing The New Anomalist.I was infected by their distorted perceptions, that's what she says. The accusation isn't fair. She doesn't know about my relationship to datura. The same flower, tragically enough, that she once gave me with the best of intentions. The damage it caused is permanent.

When I think about datura, I remember the Marquis, the chief editor of The New Anomalist, and all the magazine's readers and contributors. I had never known that people could have such odd ideas. Together, the datura and these people formed a new pattern, a wavering structure into which I innocently stepped. It was a trap from which escape would not be easy. In a way I am still fighting for my freedom.

It has been so long now. You'll have to tell me the year, I can't remember today. The flower changed me, my perception of the world, and my sense of time, as well. The world is no longer the same place, and neither am I.

This is what I think I've learned: reality is nothing more than a working hypothesis. It is an agreement that we don't realize we've made. It's a delusion we all see. Yet it's a shared, necessary illusion, the end product of our intelligence, imagination, and senses, the basis of our health and ability to function, our truth.

Hold on to it. It's all—or nearly all—that you have. Try to step outside of it and your life will change irreversibly, assuming you survive at all.

If you want, I'll let you read the notes I made at the time. I've expanded them here to pass the time. They aren't pure diary entries. The dates are missing, and I doubt they're in chronological order. How well these entries describe what really happened isn't any clearer to the writer than they are to the reader. To describe events is to distort them. Like pressing flowers, books preserve the appearance of events, but not their original dimensions.

A woman dressed in white came to me again tonight. She is not welcome here. It's now dawn, and I have been up almost all night.

My eyes seek the sky, the luminous clouds, before sleep. A devout person once wrote, "All is vanity, all is delusion except these infinite heavens."