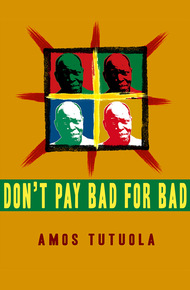 Amos Tutuola (1920–1997) was a largely self-taught Nigerian writer who became internationally praised for books based in part on Yoruba folktales, especially the phantasmagorical classic The Palm-Wine Drinkard (1952). Welsh poet Dylan Thomas called the novel "thronged, grisly and bewitching," bringing it even more attention. He is considered an iconic international writer.

Don't Pay Bad for Bad includes a selection of out-of-print, rare, and never-before-published fiction by the iconic Nigerian author. Amos Tutuola (1920 - 1997) was an iconic Nigerian writer who became internationally praised for books based in part on Yoruba folktales, especially the phantasmagorical The Palm-Wine Drinkard (1952). Welsh poet Dylan Thomas called Tutuola's work "thronged, grisly and bewitching," bringing it even more attention. This edition features an extensive introductory essay on Tutuola by his son Yinka Tutuola, an afterword by Matthew Cheney, and a bibliography. The collection has been praised by Nigerian-born writer Nnedi Okorafor.

There once lived two tight friends named Dola and Babi. Both were ladies. Babi and Dola had liked each other since when they were children. They wore the same kind of clothes and were always going everywhere together in their village and to several other villages as well. Because of this, many people thought that they were twins.

Both went everywhere together until they grew old enough to marry. But, as they liked each other so much, they decided to marry two men of the same family and who lived in the same house, so that they might be with each other always.

Luckily, a few days after they had agreed to do so, they heard of two men who were born by the same father and mother and lived in the same house as well. So Babi married the one who was the junior and Dola married the second one who was the senior. Now, Babi and Dola were very happy because they were living together in their husbands' house as when they had not been married.

A few days after their marriage, Dola cleared a part of the front of the house very neatly. She sowed one kola-nut on that spot. After a few weeks, the kola-nut shot out. Having seen this, she filled up one big jar with water and put it before her new kola-nut tree. Very early in the morning, Dola would go and kneel down before her tree and jar, and then she would pray to the tree to help her get a baby in time. Then after the prayer, she would drink some of the water which was inside the jar. Dola believed that there was a certain spirit who was coming and blessing the kola-nut tree and the water in the night. Having done all this, then she would go back to her room before the rest of the people in the house would wake.

After some months, the kola-nut tree grew up to the height of about two feet. But unfortunately, the animals of the village began to eat the leaves of the tree and this hindered its growth. One morning, Babi saw Dola, her friend, as she knelt down before the tree and jar praying. After the prayer, Babi asked, "Dola, what are you doing before that kola-nut tree and the jar?"

"Oh, this kola-nut tree is my God and I always ask it to help me to get a baby in time," Dola, pointing a finger to the tree and jar, explained quietly.

When Babi noticed that the animals had eaten the leaves of the tree, she went back to her room. She brought the head of her large pitcher from which the body had been broken away. She gave it to Dola and advised her to cover her tree with it so that the animals might not be able to eat the leaves of the tree again. Dola took it from her and thanked her greatly. Then she covered her tree with it, and as from that morning the animals were unable to eat the leaves again, and the tree then grew as quickly as possible in the centre of the head of the pitcher.

A few years later, the tree yielded the first kola-nuts. The nuts were of the best quality in the village. For this reason the kola-nut buyers bought them with a considerable amount of money. And when the tree yielded the second and the third crop of nuts, the buyers bought them with as large a sum of money as before. So in selling these nuts, Dola became a wealthy woman.

Having seen this, Babi was so jealous that one day she asked, "Please, Dola, will you return the head of my pitcher this morning?"

"What? The head of your pitcher?" Dola shouted with great shock.

"Yes, the head of my pitcher. I want it back this morning," Babi replied in a jealous voice.

"Well, the head of your pitcher cannot be returned at this time unless I break it into pieces before it will be able to come out of my tree," Dola replied with a dead voice.

"The head of my pitcher must not break nor split in any part before you return it to me," Babi shouted without mercy.

"I say it cannot be taken away from the tree unless the tree is cut down!" Dola explained loudly.

"Yes, you may cut the tree down if you wish to do so, but at all costs I want the head of my pitcher back!" Babi boomed at Dola.

"But Babi, remember that both of us have been friends since when we were children. Therefore, do not attempt to destroy my kola-nut tree," Dola begged Babi.

"Yes, of course, I don't forget at any time that we are friends, but at any rate, I want the head of my pitcher now!" Babi insisted with a great noise.

At last, when it was revealed to Dola that Babi simply wanted her tree to be destroyed so that she might not get kola-nuts to sell anymore, she went to the court of law. She sued Babi for trying to destroy her tree. But, when the judge failed to persuade Babi not to take the head of her pitcher back, he judged the case in favour of her, that Dola must return the head of the pitcher to her.

With great sorrow, the kola-nut tree was cut down and the head of the pitcher was taken away from the tree and returned to Babi. Babi was now very happy, not because of her pitcher but of Dola's tree which was cut down. After that she and Dola entered the house and they continued their friendship as before and Dola did not show her sorrow for her tree in her behaviour towards Babi.

A few months after the tree was cut down, Babi delivered a female baby. In the morning that Babi's baby would be named, Dola gave her a fine brass ring as a present to put on her baby's neck, because brass was one of the most precious metals in those days. Babi took the brass ring from Dola with great admiration and she put it on her baby's neck at the same time. This brass ring had been carefully moulded without any joint.

Ten years passed away when one fine morning, as Babi's baby was celebrating her tenth birthday, Dola went to Babi, and asked gently, "Babi, my good friend, I shall be very glad if you will return my brass ring this right fine morning."

"Which brass ring?" Babi sprang up and shouted.

"My old brass ring which is now on your daughter's neck," Dola pointed a finger at the girl's neck, as if she was simply joking with her.

"This very brass ring, on my daughter's neck?" Babi was trembling with fear.

"Please, Dola, my good friend, don't try to take your brass ring back. As you know, before the ring can be taken away from my daughter's neck, her head must be cut off first because it is already bigger than the ring!" Babi begged with tears.

"I won't force you to cut off the head of your daughter, but I want my brass ring back without cutting it!" Dola insisted.

At last, when Babi failed to persuade Dola not to take her brass ring back from her, she went to the same court of law. She sued Dola for tying to kill her daughter. Unfortunately, the case was judged in favour of Dola when she related the story of her kola-nut tree, which was cut down when Babi insisted on taking the head of her pitcher back. The judge added that the head of Babi's daughter would be cut off in the palace of the king and in the presence of the whole people of the village, so that everybody might learn that jealousy was bad. Then a special day was fixed to behead Babi's daughter so that the brass ring could be taken away from her neck.

When that day came, the whole people of the village gathered in the front of the palace and the king sat in the middle of the prominent people. Then the king told Babi loudly to put her ten-year-old daughter in the centre of the crowd and she did so. She and her daughter stood, and both were trembling with fear while the swordsman, ready to behead her daughter, stood at the back of the girl with a sword in hand, waiting to hear the order from the king and then to behead her.

The people were so quiet with mercy that it was a few minutes after the king had made his announcement to Babi before they could talk to each other, and the people mumbled again with grief when the king gave the order to the swordsman to behead the daughter.

But, as the swordsman raised the sword up to cut the head off, Dola hastily stopped him and announced loudly,

"It will be a great pity if this ten-year old daughter is killed, because she has not offended me, but her jealous mother has. And, I believe, if we continue to pay bad for bad, bad will never end on earth, therefore, I forgive what Babi has done to my kola-nut tree!"

The king and the rest of the people clapped loudly for Dola immediately when she pardoned Babi. Then everyone went back to his or her house with gladness, and Dola and Babi were good friends throughout their lives' time.