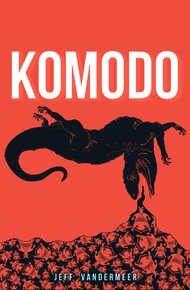 Exclusive for StoryBundle readers: the first stand-alone e-book version of an incendiary speculative fiction novelette from the NYT bestselling author of the Southern Reach trilogy. Meet your cast of characters: Angels and ghost frogs, transdimensional komodo dragons and secret forces using luna moths for surveillance. Want to traverse space and time to avoid the komodos tracking your scent? All you have to do let yourself be devoured by a giant undead bear? Confused yet? You should be. But this is the secret world our nameless narrator has stumbled into, ever since being rescued by the angels from an exploding airplane. And she'll make sense of it for you, or die trying. The expanded version of a story that appeared in Arc magazine in 2012.

Child, standing there in your flower dress considering me with those wide dark eyes while the band plays out in the courtyard... I'm going to tell you a story. It doesn't matter if you can't understand me—they can, and they need to trust me. But I need you, too, because every tale requires an audience, and you're mine. Don't worry—it won't take long. I don't have long, anyway.

I'll admit my story starts in a strange place, but bear with me. It starts inside of a giant green plastic alien head because I was all dressed up and on my way to a party. Let's say the party celebrated something like the Day of the Dead, and that I was in a hurry to get there not just because of the party but because of the after party. The after party is always where it's at—if you can get an invite.

The weight of the head made me stagger back and forth like a drunkard until I got used to it. The funky smell inside had a kind of intoxicating effect, which might also explain part of the staggering... and it made me feel a kind of extra-terrestrial clarity coming on, like the mysteries of the universe might soon be solved, or some small part of them. So this is what it's like to be free, was one thought, with this giant head on my shoulders, my arms pinned, and the second thought was: it's so green out there. Even the birds were green. The garbage collectors were green, and so were all the cars. Did I say I was moving fast? Staggering, yes. Running, yes.

Such feelings overwhelmed me in that moment! The least among them a lingering sense of appreciation that the buildings accommodated people with giant green heads.

The weight of the head increased as my path took me through a local shopping center, and soon I felt a pressure pulling on my neck, which puzzled me. When I managed to find a reflective surface, I discovered that a rag-tag band of green children had attached themselves to my giant head by means of crude homemade grappling hooks and were by their combined mass throwing off my balance. I had no choice but to take drastic action. I sat down on the pavement and cursed at a rapid rate, in a variety of local languages. After half an hour, the children began to find me less interesting, and left. I was able to continue in my rapid progress without further interference.

No, child. No, I didn't really sit down and curse. I rose in a fury and flung juveniles like ragdolls. The ones who had held onto their grappling hooks, which is always a fool's chance.

Did I say it was a shopping center? It wasn't a shopping center, or even a farmer's market. I only said that so you wouldn't feel uncomfortable. And they weren't really children. But this is not entirely the truth, either. Your comfort level—and now I'm not talking to you, who can barely understand this language, but to the watchers, who, by the way, should know that this child has nothing to do with any of this; she's just a bystander, and may or may not still grow up to be innocent... it's beyond my control, mostly.

But your comfort level is only one consideration because, after all, I'm the one bleeding out.