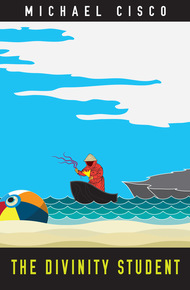 The Divinity Student by Michael Cisco

The International Horror Guild Award-winning novel that launched the career of a writer sometimes described as "the American Kafka." Struck by lightning, resurrected, cut open, and stuffed full of arcane documents, the Divinity Student is sent to the desert city of San Veneficio to reconstruct the Lost Catalog of Unknown Words. He learns to pick the brains of corpses and gradually sacrifices his sanity on the altar of a dubious mission of espionage. The divinity student's strange adventures will haunt the reader long after finishing this unique and exciting novel.

As Publishers Weekly wrote, "Cisco wields words in sweeping, sensual waves, skillfully evoking multiple layers of image and metaphor. Though his novel is brief, it is a gem of literate dark fantasy, concisely illustrating the power, both light and dark, of words and meaning." Recommended for fans of Clive Barker, Thomas Ligotti, Gemma Files, Kafka, Leonora Carrington and other masters of weird fiction. With an introduction by Hugo and World Fantasy Award winner Ann VanderMeer.

First black clouds dimming the sky, trailing shredded white veils in the rustle of settling audience, and, as each cloud passes framing itself perfectly in its own outlines, one especially stands out—looming like an iceberg above the others. It's moving steadily along now, coming fast and low over green canyons. It dips between the hills into a smell of water, and the placid anxious hush of rain falling on trees and grass.

The Divinity Student, in his heavy black coat, is scaling a steep mound down in the canyon. His feet are slipping on the wet grass; he steadies himself with outstretched arms. He's wet to the skin, his spectacles are fogged and running with rain. The slope is water-softened and slick, so he's forced to scrabble at roots and stones to avoid falling. He didn't want to miss a walk in the rain. Above his head, the sky changes color from gray to black. Breathing hard and almost spent, he gives himself a last violent shove and crests the hill. For a few moments he stands bent with his hands on his knees, then he turns to take in the entire canyon rising about him on all sides like a green bowl. The sky above him thunders and blackens to coal black: a cloud iceberg-high. Flushed, he pads across the green breast of the hill's crest to the highest peak. He passes a hand over his cropped hair and water rills over his fingers. He reaches the top—the sky splits above his head. Standing in tall grass, eyes lost in the distance and the wind playing in and out of his shirtsleeves and blowing up his coattails searing blue lightning scrapes its fingernails along his body in a column lifting him off the ground. The cloud opens a moment and reaches down, pulling him off his feet. Suspended in an infinite moment, flat in two dimensions between ground and sky, his body arching his eyes staring fingers close on snapping air white face splits apart as he turns down twisting to the dirt—stone dead. Quiet wet grass in his mouth and rain streaming over his sodden coat on his dead body, glassy eyes rigid and open, staring at one hand fixed in mid-convulsion, cupping the rain in its dead palm, his dead back shattered.

Now they're finding him. Hands take him up; they make off down the slope, in the mud, with his body. The ground levels and the trees close in like clouds and spatter them with big drops of rain. They carry him away to a low building enmeshed in trees and the shadows of trees. Quickly they bring him inside, lay him across two sawhorses and start cutting at him—they gut him like a fish, cut open from throat to waist, red hands pull his ribs apart, head and shoulders hanging down, his arms lying flat on the ground, tugged back and forth as they empty him out. They dump his contents cooked and steaming on the floor, and bring up stacks of books and manila folders, tearing out pages and shuffling out sheets of paper, all covered with writing, stuffing them inside, tamping them down behind his ribs and crushing them together in his abdomen. What pages they select and what books they tear are of little importance, only that he be completely filled up with writing, to bring him back, to set him to the task. Then they suture him shut again—drag him to the tub (his arms and legs dangling and catching on things overturning tables and chairs) and dump him in the water, slopping blue water on gray stone pavings, and together they draw breath and drop open their mouths, screaming noiselessly as they shove his face under the running tap and pushing him full under the water with their red hands, under their wings. The Divinity Student twitches, lashing water over the lip of the tub. Gaping they push him down harder. He jerks to one side. They turn the spigot up full bore and shove his face into the stream—he thrashes, his body goes livid and white then his eyes and mouth snap open and gape wide all screaming without sound (they grab him and pull him out).

Clammy, bleached colorless, hauled out of the water, flopping on the ground, they hold his head as he coughs water and stares across the floor at the heap of his own guts, and recognizing them he screams again, screams himself into shadows and clammy darkness.

Later he's discovered back at the Seminary, lying pale and unconscious in an infirmary bed. Orderlies shake their heads over him "How did he get here?"

The Divinity Student comes to a few hours later. For a moment the memory comes racing forward like a black wave of frigid water, and he recoils and slams his mind shut. Fingers pulling, his flesh melting around them like clay, coughing water on gray paving stones—he snaps to attention and faces the windows across from his bed, reduced to a bland white smear of cloud-filtered daylight without his glasses. He stares at his hands. They look like talons hovering over the colorless blanket, something mechanical about them now. He sits perfectly still; nobody approaches or notices him, he fades in and out of consciousness with a bitter taste in his mouth and an ugly feeling throbbing behind his temples.

Disjointed he awakens again and it's the next day already, morning or afternoon he can't distinguish. Someone is drifting tall and angular down the aisle, coming to a halt at the foot of his bed like a docking ship. After a while he recognizes him—an important administrator, a teacher greatly feared in the Seminary. His face is blurred in the bland light. The Divinity Student sluggishly brings his name into focus: it's Fasvergil. As if in response Fasvergil seems to click into place in his overlong cassock, bunched frayed and torn around his feet. He looks up in pale response. Fasvergil is staring at him.

"You've had quite an adventure. Two of the boys saw what happened to you."

The Divinity Student feels a sudden weight in his chest. He tries to speak but his brittle throat cracks with the effort and he can't.