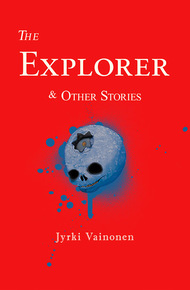 Jyrki Vainonen is an award-winning Finnish author who is renowned for his Finnish translations of the works of Seamus Heaney, Jonathan Swift and William Shakespeare. He has lived in Ireland and wrote his licentiate thesis on Swift's Irish pamphlets. Vainonen's first collection of short stories was awarded the Helsingin Sanomat Literature Prize and his work has been featured in such iconic collections as the Dedalus Book of Finnish Fantasy.

The Explorer & Other Stories by Jyrki Vainonen

This sly book showcases the quietly strange, unsettling short fiction of this acclaimed Finnish writer. Jyrki Vainonen is renowned for his Finnish translations of the works of Seamus Heaney, Jonathan Swift, and William Shakespeare. Vainonen's first collection of short stories was awarded the Helsingin Sanomat Literature Prize and his work has been featured in such iconic collections as the Dedalus Book of Finnish Fantasy. This first English-language collection includes stories from Jyrki Vainonen's three collections and is translated by J. Robert Tupasela and Anna Volmari, with one story translated by Hilde Hawkins. Introduction by Johanna Sinisalo.

Doctor Klaus Nagel, the director of a remote weather station, disappeared on the night of April 6th. The station was located on the outskirts of the city, atop a low crest of rock. The night was windy, low clouds drifted over roofs and tree tops. In the small hours between four and six, it rained. Water dug small furrows into the dirt road that led up to the station. Behind the station, rainwater rolled down the flanks of the rock.

Meteorologist Johannes Dagny, who was working the night shift, was waiting to go home. He sat half-asleep at his desk in the light of a small lamp and stared out into the yard. Every now and then, his head nodded down to his chest, and he woke with a start. In an attempt to stay awake, he got up to stretch his legs and look out the window. Puddles glistened on the uneven yard. Steam rose from the sand. Raindrops sparkled on the branches of the birch tree right outside the window. Dagny was waiting for Dr. Nagel. He longed to see the lights of Dr. Nagel's red Honda appear from behind the hill and for the car to turn into the yard, swaying as it crossed the puddles, sand hissing beneath its tires.

A clock ticked away on the desk. When Dr. Nagel hadn't shown up by seven o'clock, his colleague presumed that he had overslept and decided to wake him.

The phone rang five times, and then he heard a sleepy voice on the other end. It took him a while before he was able to explain to Marianne, Dr. Nagel's young wife, why he was calling, as she had been deep asleep when the ringing phone had woken her up. "Hold on," Marianne sighed into Dagny's ear.

A few moments passed. The morning news was on the radio. Dagny stirred the cold coffee that was congealing in the cup in front of him. Birds were singing in the woods behind the station. He imagined Marianne shaking her husband awake, handing him the receiver, yawning, stretching her arms, and running her fingers through her dark hair. Dagny had met Marianne once at party hosted by his boss. He would have been happy to exchange places with Nagel and wake up every morning next to a woman like that.

Dr. Nagel was not on his way to work, however. He was not sitting behind the wheel of his Honda, driving past the market square and the city hall, or turning his car onto the road leading out of the city. After the phone call, Marianne noticed that the clothes that her husband had laid out for work were hanging, carefully folded, over the back of a chair. She slipped out from under her warm blanket and padded barefoot over to the kitchen. Not a soul was there. Not in the hallway or the bathroom, either. After returning to the bedroom and wrapping herself in a robe, Marianne noticed a piece of paper on her husband's nightstand. The note contained a single sentence written in Dr. Nagel's sharp hand: "My dear Marianne! I have vanished from your life to become a part of your life. Klaus."

A few hours later a serious-faced police inspector stood in the Nagels' kitchen, asking Marianne whether she had any idea what the message meant. Marianne shook her head. They heard the sounds of the policemen searching through the apartment: the furniture clattered upstairs as someone moved it, the bookcase was being emptied in the living room. Someone coughed in the bathroom. The young inspector clearly felt uncomfortable. "No need to worry, Mrs. Nagel," he comforted the woman in front of him and lifted his gaze from her chestnut hair to some indeterminate point near the ceiling. "We'll find him."

But the inspector was wrong. Dr. Nagel was not found, even though the investigation was conducted thoroughly and a missing-person bulletin was published in the media. No one seemed to have seen Dr. Nagel after the 5th of April. He had spent that morning at the weather station, and at 3 p.m., the person who had the night shift had relieved him. Nothing unusual had happened during the day before his disappearance. The evening had also passed in a typical fashion, Marianne said. At 11 p.m., Dr. Nagel had kissed her good night and stayed in his study reading a book about the conquest of the North Pole, a book that he'd been engrossed in for the past couple of days. The next morning Mrs. Nagel had woken up alone in their wide marriage bed.

For a moment, the disappearance of Dr. Nagel turned the lives of those it touched upside down. The familiar daily routines at the weather station were thrown into disarray, as work there was constantly interrupted. Reporters, photographers, and news sharks bustled about amid the maps, monitors, and computers. The police hunted for fingerprints with their powder brushes, finding more than enough all over the station. Johannes Dagny had to repeat the events of his shift to the reporters over and over again. He saw himself on television and couldn't help wondering whether that was really how he looked in the eyes of others. The simple act of describing the events momentarily transformed the life of the ever so conscientious Dagny. He came to enjoy the feeling of power he got from sitting in front of the reporters, who hung on his every word. He became more enamored by his own story with each telling and soon began to embellish it with juicy details: the nocturnal rain shower became "the deluge of the century," streams became "rapids," and dull drowsiness into "a slumber populated by strange dreams."

The fuss caused by the disappearance also seemed to bother Marianne. Soon after the disappearance she shut herself in the house and refused to talk to the reporters. The only person she let in was the police inspector. His route did seem to take him rather frequently to Dr. Nagel's house, which stood in a grove of pine trees on the crown of a hill on the outskirts of the city. The inspector's car was seen parked next to the Nagels' red Honda almost daily—even in the evenings, when the blinds had already been drawn and the moon poured its light onto the lawn.

The young wife's reticence was grist for the tabloids' mill. Someone leaked to the press that the Nagels' marriage had been faltering. Marianne was painted as a neglectful, wanton woman, whose hunger for men remained insatiable, even after she'd married Dr. Nagel—for money, according to the tabloids—a man twenty years her senior, whom she'd then murdered and whose body she'd hidden.

Amidst all the fuss, the investigation was going nowhere. Marianne did, however, notice that her husband's backpack and fishing gear were missing, as were some clothes that he used when he went hiking. The police assumed that Dr. Nagel had, for some reason or another, gone out for a nocturnal hike. The possibility of sleepwalking was also considered, though Marianne claimed that her husband spent his nights sleeping, not walking around. The woods around the city were combed, to no avail. No sign of Dr. Nagel was found.

A couple of weeks after the disappearance, the fuss started to subside. The papers had to come up with new headlines and exposés. In the police archives, the file on the disappearance of Dr. Nagel was moved to a tall metal filing cabinet marked "Unsolved disappearances." No one paid attention any longer to the fact that the inspector's car was now parked in the Nagels' yard every day. No one was interested that Marianne, who still seldom left her home, didn't look grief-stricken, but was glowing like a young bride.