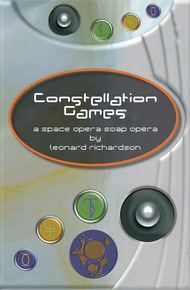 Leonard Richardson writes fiction, nonfiction, and software. His short story "Four Kinds of Cargo" is included in The Year’s Best Science Fiction & Fantasy, 2013 Edition (Prime Books). He co-edited the anthology "Thoughtcrime Experiments" with Sumana Harihareswara. His nonfiction work includes "Ruby Cookbook" and the forthcoming "RESTful Web APIs" (O'Reilly). His most popular game is robotfindskitten. He lives in New York with his wife and zero dogs.

Ariel Blum is pushing thirty and doesn’t have much to show for it. His computer programming skills are producing nothing but pony-themed video games for little girls. His love life is a slow-motion train wreck, and whenever he tries to make something of his life, he finds himself back on the couch, replaying the games of his youth.

Then the aliens show up.

Out of the sky comes the Constellation: a swarm of anarchist anthropologists, exploring our seas, cataloguing our plants, editing our wikis and eating our Twinkies. No one knows how to respond – except for nerds like Ariel who’ve been reading, role-playing and wargaming first-contact scenarios their entire lives. Ariel sees the aliens’ computers, and he knows that wherever there are computers, there are video games.

Ariel just wants to start a business translating alien games so they can be played on human computers. But a simple cultural exchange turns up ancient secrets, government conspiracies, and unconventional anthropology techniques that threaten humanity as we know it. If Ariel wants his species to have a future, he’s going to have to take the step that nothing on Earth could make him take.

He’ll have to grow up.

What the hell is up with the moon? I am riveted to the news which is quite the productivity killer because EVERYTHING HAPPENS SO SLOWLY. I have CNN on right now because they have the best satellite footage, and I swear there was just a five minute discussion about whether or not something is a dust cloud. Yes, it's a dust cloud! Some fucker is chopping up the moon! You're going to have a certain amount of dust in that circumstance!

But compared to how long you have to wait to see something happen, that five minute-argument goes by as quickly as the time after you hit the snooze button. So, starting now, I'm not watching any video that's not sped up 100x. Okay, CNN, you're gone.

A 24-hour news channel with some balls would crash their rented satellite into the "center of activity", the spot in lunar orbit where all the moon chunks are going. But satellites probably don't work that way. So we get shots of the lunar dust cloud because all the satellites were built to map the moon. The moon's not the story! Stop playing peekaboo. Get some close-ups. Do it for science!

I will post a review later tonight. I have twenty critical bugs to fix in this fucking pony game.

Finally done with work. Fans of cute ponies will squeal with glee to learn that Pôneis Jun-Feng 5 has met its death-march deadline and will soon be landing in North America as "Smarty Pets: Pony Stable Extra". Thanks to yours truly, the Smarty Pets series continues to have the best pony physics of any handheld series. You haven't lived until you've used the styluses on the DS Twin to braid a pony's hair! (Ironically, that was around the point where I stopped living.)

I have to immediately pivot to a tech demo for the upcoming all- hands meeting in São Paolo, so let's do a game review now, while it won't raise questions about my time cards.

ESRB rating: T for cartoon violence and teleological suspension of the ethical

As always, I've been thinking, "how can I tie in current events to a review of an old video game that no one will read?" Because I am all about your satisfaction. There are a number of games where you mine the moon or some other planet, and it's a fun concept that's hard to screw up, but it's also hard to make a mining game that really stands out.

And then there's Caveman Chaos, the game your grandmother gives you because she knows you're into computers and it was in the $10 bin at the office supply store. The biggest-scale, most terrifying "god game" of all time.

In a typical god-game like City, in Darkness (my personal favorite) you've got a contextual palette of tools for keeping your charges happy: tools for regrading the ground, putting up a school, and so on. In Caveman Chaos you communicate with your primitive isometric-view tribes the same way G-d does in real life—by pummeling the shit out of things!

Need to move a river? Flood it! Mammoths moving out of hunting range? Bring in the ice sheets! Need to clear some space for the new fire pits? You can't spell "fire pit" without "fire"! Your cave-dudes running out of stone chips for spears? Create obsidian the natural way, by sending a fucking active volcano right through the crust of the earth!

In other sim games, when you get bored with doing things correctly, there's a menu of catastrophes you can inflict on your simulated population—hurricane, dirty bomb, Godzilla attack, Prohibition. In Caveman Chaos, catastrophes are pretty much the only tools at your disposal. The Narix devs surveyed what had come before and said, "You know that 'extra' mechanic that's thrown in just for fun? Let's make that the CORE OF THE GAME."

Natural disasters are an unconventional technique for winning your population's affection. In fact, they terrify the poor bastards. But that's the genius of this game. Catastrophes bring in the resources you need to advance in the game, but they also kill people and leave the survivors cursing your name. Oh, cruel fate!

Would you believe it gets worse? After a few ice ages and lightning strikes, your cavemen develop religion, as a sort of defense mechanism. A caveman wakes up one day hearing voices—those voices are you. He's promoted to shaman, and he forms the rest of your control set.

Tell your shaman where you're going to put a volcano, and he'll declare that area taboo, like a Neanderthal zoning board. This is implemented in-game with an area selection interface and it's a useful way to herd your cavemen around the map. Only now you'd better put a volcano there, or your shaman will lose credibility and soon enough end up on the wrong side of a spear.

Shamans have a stat called "soulpower" (this game was originally in German). I'm sure soulpower was intended to be some generic fantasy-game thing like mana or magic points, but when I was a kid I interpreted it as literally the strength of the soul: the degree to which a shaman can listen to the voices in his head without going batshit insane. Push a shaman too hard (and you'll need to push them hard to get anywhere in this game) and he'll snap, start his own religion, and send your caveman tribe into a schism of inappropriate zoning and poorly-built fire pits.

So, a game that pretty explicitly plays up the "god" in "god game", in which your primary means of conversation with your worshippers are natural disasters and psychological torture. I wonder why this game ended up in the $10 bargain bin in America? City, in Darkness cleaned this idea up for the family by adopting a more familiar good-versus-evil theme, and honestly City, in Darkness is the one that I still play. But for sheer loincloth-pissing terror, for the feeling of looking up at the moon and seeing someone cutting chunks out for some unknown purpose, it's gotta be Caveman Chaos.

The news is now a parade of denials. Politicians are very concerned and plan to investigate the issue Right Now. NASA scientists have no clue and would like to get back to work. Crazy former NASA scientists know a lot about lunar pyramids, but sadly not much about lunar space stations. Air Force asshats with perpetual frowns are declining comment on nonexistant black ops projects. A few hours of this and I may be going on myself to deny everything. And then they'll do the weather report.

Knock it off, guys. We all know who it is. Too bad they're not giving interviews.

Where were you? I was asleep. Jenny sent me five links to the same video and then called me.

"Yeah, you woke me up, okay? Mission accomplished. I can't see the link. The server's down."

I ran downstairs to the living room, unplugged a bunch of consoles, and tried to remember how to receive a broadcast signal. "Tell me what's happening," I said, "in the video."

"It's a contact mission," said Jenny. "They came through a wormhole. There's about twenty kinds of aliens and they want us to join them."

I fumbled through the television menus. I changed the input source and my TV picked up the signal.

When I was in high school the space shuttle Columbia disintegrated over my head while my dad was driving me to school. We heard about it on the radio, and I cried and cried. A few weeks later, when they decommissioned the other shuttles, I didn't cry because I didn't watch the video, but I knew I would have. Crying isn't sadness; it happens because an emotion is too big for your body. Emotions about space have always been too big for me.

I'm no expert at having emotions, but this is as big as they come. I'm still watching this video and it's still like watching Columbia touch down in Florida and the crew come out waving and smiling, and behind them the crew of Challenger waving and smiling in their 1980s blue suits. And the crews from Apollo 1 and Soyuz 11, and finally Laika the dog waving a little Soviet flag in her mouth. There's nothing to compare it to. It's the object of all future comparisons.

"Are you still there?" said Jenny.

My television showed a small hairy creature standing in front of a screen, manipulating symbols with twitches of the tentacles around its mouth.

"That may not be true," said Jenny.

"I don't know where in the video you are."

"The thing that looks like a Dragon's Dice cerebrophage," I said. "With the tentacles on the face. It's gesturing at a computer in a very game-like way."

"Jeeeeezus, you've known about the aliens for three minutes and you're back to talking about video games."

"They have computers," I said. "They'll have games. I'm going to find out what game that cerebrophage is playing and I'm going to review it on my blog."

Jenny is understandably skeptical. But it's going to happen, readers. This is my quest.