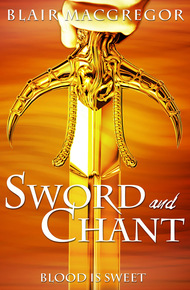 Blair writes fantasy—adventurous, epic, and dark. She also teaches and speaks on a variety of topics—martial arts, teaching, wellness, failure and resilience—for audiences ranging from a couple dozen to a few thousand. Most evenings, you can find her teaching karate at her local dojo. In between all that, Blair hikes and camps, grows organic produce, and indulges in the occasional ziplining excursion. She loves traveling to places both wild and domesticated. She currently lives in rural Indiana with her one son and two goofy dogs.

Her short fiction has appeared in Cicada and Writers of the Future. She is a graduate of Viable Paradise.

Sword and Chant by Blair MacGregor

Jaynes will do everything necessary to avenge his father. But his triumphs as a warlord didn't prepare him to resist the seductive promises of the Chant—the exiled god of sacrifices and dreams.

Shala is a Sword raised in Kennem, but compelled to defend Calligar from the Chant's brutal control. That means she must protect the man she most despises—Jaynes, the conqueror's son, bent on crushing the Kennem rebellion at any cost.

But the price of blood is blood, and every death empowers the Chant. By the time Jaynes wants the fighting to stop, the battles are beyond his control. Allies question his leadership, rebels grow more bold and desperate, and the Chant steals closer and closer to regaining the power that once tore Calligar apart.

When the last Sword falls, the Chant will rise--and sacrifice will be His to command.

News of the Iyah's murder sucked away what little resolve remained in Benkil Andari's heart. Crouched outside the granite crevice that was his home, he pulled a charred snake from the coals. While it cooled, he chewed bitter roots into a starchy pulp he could swallow. There wasn't much else to eat out here, where the lands of Calligar and Kennem butted against each other. Such fare had aged him a little, despite the Chant's infernal tampering, though not enough to put a strand of gray in his black-brown hair or a line on his smooth cheeks and brow. Another score of years might pass before his muscles atrophied and forgot the skills the Chant had once valued. Thinking of the years ahead sometimes enraged him. Most often, it made him weep.

On this night, Benkil was remembering a time of choices. Travel east or west, eat fig cakes or cucumbers, accept or refuse a contract, grant mercy or murder on a hunch. He remembered when he'd known his own name. In his loneliest hours, he huddled outside in the cold and whispered his name's cadence to jackals that sometimes lurked among the acacia trees, to geckos that scurried between the rocks.

That much the Chant had allowed him—a moment to moment reminder of Benkil's betrayal, of the killings he'd left unfinished. A remnant of who he'd been, of who he could be again if he simply relaxed.

Benkil despised the compulsion he had resisted for twenty-four years, eight months, and seventeen days. Once—only once—had he relaxed to test the compulsion's strength. Fifteen miles had been lost before he regained control of his limbs, ceased running toward the Chant, and collapsed. He'd spent five days regaining those miles, sometimes on hands and knees, throwing himself against the compulsion's thousand-pound pull.

That had been three years ago. He'd hobbled himself with manacles every night since, mistrustful of his slumbering self. But twice he'd awakened with the key in his hand. All he had gained from his fugitive living was the truth. He could resist the compulsion, never break it. Fight it, never conquer it. Gaze across the arid hills toward distant Osterloh, toward freedom among past enemies, but never cross the border to escape.

Defiance had been stupid. Heroic, perhaps, but stupid. And if he were honest, he would admit he'd found a new perspective: apathy.

With the Iyah's murder, the Chant had made his intent known. The banished god wouldn't abide quietly any longer. Benkil doubted anyone else would link consequence with cause. But Benkil had been the Chant's thrall long enough to understand his hunger, to know he wanted to again wield power over everything from the smallest scrap of deadfall to the summit of holy Mount Shina. The Chant forgot nothing he wanted to possess. And since the Chant hadn't dissolved the compulsion...

Benkil shrugged off the ache of futility with the ease of habit, and gnawed at the charred snake as the sky turned golden with sunset above the dark and rocky landscape. Acacia trees stood against the beauty like mounds of tattered black lace. Already the nights were growing colder. Steady meals would be nice come midwinter, the Chant whispered in his dreams. Spiced quail and roasted oryx, frothy goat's milk and thick carob, melons summer-sweet to belie the season. A warm bed of soft wool and thick silks. Perhaps a pliant bedmate. Or two. How easily he could be bribed when hope fell into disuse.

He stood and stretched his arms overhead, muscles and sinews still fluid with strength, then he squeezed between the canted granite slabs. Four shuffle-steps, and the crevice widened into a cave that remained mostly dry when it rained. By feel, he found his bundle of tools and the boots he'd stolen yesterday. His bare toes grazed the manacles. He left those behind and took the remaining sum of his life outside.

As darkness slid over the hills, he pulled on his boots and cross-laced the tops just below his knees. The fine kidskin looked absurd with his coarse leggings and oryx-hide tunic. Benkil grimaced at that long-buried twinge of vanity. Time hadn't changed him so much after all.

He took one item from his pack of tools—his favorite slasher. His fingers slid around the grip, its polished wood settling against calluses that hadn't softened. The crescent blade curved across the back of his fingers so when he made a fist, he could open a throat with the flick of his wrist. It had been twenty-four years, eight months and seventeen days since he had last used it. And failed to use it.

Still holding the slasher, he propped his back against the granite and pulled his pack onto his lap. He gazed at the dying coals of his little fire, let settle the inner reverberations that had withstood the Chant's persistent nudge for so long, and relaxed. As the geckos chirped their eerie songs, Benkil slept.

It was bright afternoon when he awoke, and the sun was making his eyes water. He squinted at the rocky hills surrounding him, the packed earth and yellowed grass beneath his feet. He had been walking. His left arm ached. His right hand, the one still holding the slasher, felt warm. And wet. He glanced down to the thick blood coating the curled hair of his forearm, dripping from his knuckles and wrist.

He didn't want to look back. He couldn't resist.

Ten paces behind him sprawled a body. Benkil retraced his steps, then used his foot to pull the blood-soaked scarf from the face. Young eyes—too old for a child, not old enough for a man—stared up at him. The aching of his arm had been caused by the cudgel resting in the youngster's limp fist. A knife also lay nearby, clean of blood.

Crimson bubbles hissed and burst along the corpse's slashed neck, and the chest suddenly rose. Benkil knelt to press a hand over the wound, but jerked back when the bloodless lips curved into a smile glossed with pink froth.

"Well done, thrall," came the multi-toned voice—a sound that couldn't possibly be made through such a wound. "Your reflexes have slowed a trifle. You'll correct that."

"Yes, my Chant," he choked out. Nausea constricted his throat. "Why did I kill him?"

Another rise of the chest, more bloody froth. "He paid a lesser price for arrogance at your hands than he would have paid at my pleasure, yes?"

Benkil gave a convulsive shudder, unable to turn aside the memory-flashes of cruelties inflicted, of begging for mercy, of promising his own soul in exchange for a wish.

"Be done with that," the Chant said, gently. "You have always wanted to live. Come back to me, Benkil."

The name was wiped from Benkil's memory in an instant. He remembered hearing it, remembered recognizing it, but couldn't remember it. "My name..."

"You know better than to beg more than I offer. Show me what you deserve. Walk."

Benkil staggered up. The corpse was silent now, nothing but a body he'd leave behind. And the exiled god of sacrifice—the patron of unrealized dreams and unfulfilled longings, who could tempt with promises and seduce with blood—once again had a mortal assassin to do his bidding. To sing their blood sweet, came the Chant's whisper—from the present or from memory, Benkil couldn't tell.

At least the babe he'd let live was grown, would no longer wail with an infant's fear as she did so often in his dreams. She'd still die, for the Chant would demand a head with the blade. But at least she'd have the chance to run. Or fight, depending upon what mettle of Sword she'd become.

Benkil Andari closed his eyes, began walking, and slept again. The compulsion ruled him now. The Chant would guide him home.