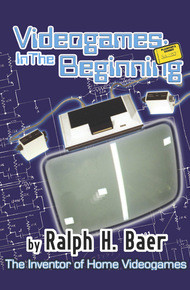 Ralph H. Baer is an electronic engineer and engineering consultant with nearly 60 years of hands-on engineering management and product licensing experience. Mr. Baer has over 150 US and foreign patents. He is probably best known as the "Father of Videogames" and holds the pioneer patent covering video games. His work in the sixties resulted in the Magnavox Odyssey game system which was the first commercial home videogame. His early videogame hardware already resides in such places as the Smithsonian and the Japanese National Science Museum.

For over fifty years Mr. Baer has been active in both the commercial and defense electronics development and production business; and in electronic toy and game invention, design and licensing. Many well-known handheld electronic toys such as Milton-Bradley's Simon, one of the most popular electronic games in history, came from his lab.

Included among Mr. Baer's many prestigious honors is his induction into the National Inventors Hall of Fame, a fellowship with the IEEE, and awarded the National Medal of Technology by Former President George W. Bush, in honor of his "groundbreaking and pioneering creation, development and commercialization of interactive video games".

Today, at 91, Mr. Baer continues to work on new products.

Videogames: In the Beginning by Ralph H. Baer

Long before there was a Sony Playstation 3, Microsoft Xbox 360 or Nintendo Wii, there was the Magnavox Odyssey, the world’s first home videogame console. But the story of videogames predates the Odyssey by six years. It begins in 1966 when a television engineer named Ralph H. Baer sat down at a New York bus station and entered history.

Videogames: In The Beginning is Ralph H. Baer’s account of how today’s $11-billion per year videogame industry began. A meticulous note keeper, Baer presents in his own words the real story of what led to the Odyssey… and beyond.

But he doesn’t end there. In this book Baer also examines other products that he has worked on such as Simon, the most popular electronic toy ever created. He also discusses his pioneering work into early forms of CD-ROMs and digital imagery.

Whether you are a student of videogame design, a game player, or a fan of inventions and history, you are sure to find Baer’s history fascinating and informative.

In the late 1950s, I quit my job as a VP for engineering at Transitron, Inc, a Manchester, New Hampshire electronics design, development and manufacturing operation. With almost 20 years of electronics engineering experience under my belt at that time, I joined Sanders Associates Inc., in Nashua, New Hampshire. There I soon became the manager of the Equipment Design Division. Sanders was then a large R&D and production company. We worked almost exclusively on advanced defense-electronics programs such as airborne radar countermeasure and antisubmarine warfare electronics. For many years, Sanders was the largest employer in the State of New Hampshire. The corporation became a Lockheed company in the mid-1980s and later, it would be a Lockheed-Martin company. In 2001, Sanders Associates was absorbed by BAE as a subsidiary.

During the 1960s and 1970s I was officially the company's Chief Engineer for Equipment Design. There were as many as 500 engineers, technicians, and support personnel in my division at one time or another. I was a busy guy. We were involved in many CRT display programs that delivered what then passed for high resolution graphics. None of the work in my division, or in the rest of the company for that matter, involved development of broadcast television technology or other forms of raster-scan displays. The display systems we had bought or built were of the stroke-writing, also called vector, types. More on that later.

At the time there were roughly forty million TV sets in U.S. homes alone, to say nothing of many additional millions of TV sets in the rest of the world. They were literally begging to be used for something other than watching commercial television broadcasts! Thoughts about playing games using an ordinary TV set began to percolate in my mind again, shades of my earlier desire to include some form of game into the TV set I designed at Loral in 1951. That idea had been nixed by my boss at the time, Sam Lackoff, Loral's chief engineer.

During a business trip for Sanders to New York City in 1966 I found myself waiting for another Sanders engineer at a bus terminal; he was going to join me for a meeting with a client. I took advantage of my free time and jotted down some notes on the subject of using ordinary home TV sets for the purpose of playing games. I have a distinct image in my mind of sitting on a cement step outside the bus terminal, enjoying a nice warm, sunny summer day, occasionally looking out at the passing traffic, waiting for my associate to show up and scribbling notes on a small pad. It was "Eureka" time…but of course I didn't know that then. The concept of playing games on an ordinary TV set had bubbled up once again from my subconscious and I got that exciting feeling of "being on to something," a feeling that is so familiar to me.