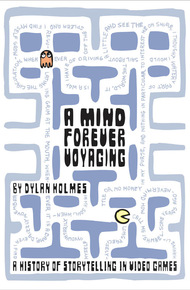 Dylan Holmes is a 20-something from Seattle. By day he pursues a degree in library science; by night he tries to balance voracious media consumption with some modicum of a social life. His accomplishments include being a features writer for the early "new games journalism" blog Nightmare Mode; inventing numerous Arnold Palmer variants; and being able to balance on an exercise ball indefinitely. His failures are too numerous to list.

An engaging and entertaining read for veteran gamers and curious newcomers alike, A Mind Forever Voyaging traces the evolution of interactive video games by examining 13 landmark titles that challenged convention and captured players' imaginations worldwide. Alternative gaming blogger Dylan Holmes focuses on games that tell stories in innovative and fascinating ways and examines the opportunities—and challenges—presented when players are given the ability to direct how a story plays out. From the text-based adventure of Planetfall and the interactive cinema of Heavy Rain to the one-act play of Façade and the simulated world of Shenmue, Holmes showcases the diversity of video game stories that have emerged in the last 30 years. Along the way, he addresses such questions as:

Critical analysis, historical perspective, and a gently opinionated personal touch make A Mind Forever Voyaging an enlightening read that captures the best that video games have to offer.

A major find, this book on the history of narrative in video games was - sadly - basically ignored when released in 2012. But when I stumbled across it, I discovered it's a super well-written romp through classic moments in video game narrative history, from Planetfall through Monkey Island to Final Fantasy VII, Meat Gear Sold 2, and beyond. The sleeper hit of this bundle? – Simon Carless

About two-thirds of the way through the game, Ryo is exploring Yokosuka Harbor, trying desperately to find a short-term job in order to investigate a criminal cartel based at the docks. Finally, an acquaintance promises to find him a job. He instructs Ryo to meet him in front of Warehouse #1 at noon tomorrow.

And then progress halts. If Ryo has talked to this character at, say, 1:00 PM, he can do nothing to forward the game's plot until tomorrow. If he goes to bed at 8:30 PM and wakes up at 8:00 AM (as he always does, being the rare teenager with obsessive punctuality), then that's nearly an hour of real time that Ryo must kill. Situations like this appear frequently in Shenmue, and the game provides numerous things for the player to do. There's a local arcade stuffed with playable games, including a number of Sega arcade hits from the time period. There are capsule machines scattered through the city, and Ryo can use his time and money trying to complete his collection of the strangely alluring pieces of plastic. He can practice a variety of martial arts moves, training his body and skill to better prepare for the inevitable fights. Or he can simply wander around and observe the city in motion. But the fact remains that these rest periods are enforced, and the player is fundamentally impotent during them. This rankled many players. Writing for the New York Times "Game Theory" column, Charles Herold concluded, "[The real time structure] seemed really cool at first, but since games themselves are something you play to kill time, killing time within a game made little sense." The nested assumption in Herold's statement is that the point of games is to be fun, to consistently provide entertainment for the player. This is hardly a controversial opinion, and indeed has been accepted as self-evident by the industry for years. Shenmue was ahead of its time in tearing down this truism. Journalist Tom Bissell observed that the idea that games must be fun is "a fallacy that grows out of this unfortunate etymological ensnarement the medium is stuck with." Video games are supposed to be fun because the word "game"—derived from the Icelandic "gaman", which literally means fun—promises it. But just as comic strips have long since ceased to be purely comedic, the video game has evolved into a form of interactive media much broader than its arcade roots. There's no reason a video game can't be used to model experiences that are engaging and enlightening but nevertheless not "fun." The fact that Shenmue is frequently tedious will certainly make it an undesirable play for many, but the existence of a dedicated fanbase also indicates that many players got something more out of Shenmue. They liked the realism of the game, even when that came at the expense of traditional ideas of play, as when Ryo (and the player) are forced to work a nine-to-five job driving forklifts for the better part of a week.

At the end of the day, this rejection of traditional fun and power-gaming permeates Shenmue. A cassette player that Ryo picks up at the beginning of the game allows him to listen to music during downtime, and is therefore one of the more useful objects in the game; yet it does nothing to increase his power. The Russian writer Anton Chekov famously ruled, "If in the first act you have hung a pistol on the wall, then in the following one it should be fired. Otherwise don't put it there." Chekov's commandment is followed as often in game design as in playwriting, with Shenmue again being a notable exception. Unlike the cassette player, the vast majority of objects in the game have no utility. Photographs flesh out Ryo's task, and capsule toys provide visual eye-candy and nostalgia; but they do not directly benefit Ryo. The only way to "improve" Ryo is to practice his martial arts moves, and these are only useful in isolated sections of the game that are typically not difficult enough to require significant training. Again, the "gameplay" is made subordinate to the experience of inhabiting the game's carefully constructed time and place. Shenmue is an experiment in silence and space, in using inaction and quiet to contextualize and strengthen moments of action and drama. The typical game is, to paraphrase This Is Spinal Tap's Nigel Tufnel, always turned up to 11. It fires on all cylinders to keep the adrenaline flowing, to keep the player engaged, but in doing so it reduces the dynamism of its mood and content. Shenmue gives ample time for the player to observe, and constructs a world worth observing.

An upside of Shenmue's lackadaisical pacing is that it allows for a particularly novel form of player choice. Games typically rush the player forward in the interest of always giving him something interesting to do. But this naturally limits the player's choices, because he's constantly encouraged to achieve goals, and the choices he makes must be in service to this achievement. In short, there's a certain degree of strategizing, with "poor choices" dismissed out of hand. Shenmue allows the player to do whatever he wants during its frequent downtime segments without attaching special significance to any one path, and thus opens up the field. I could train in martial arts, or I could spend all day at the game arcade. This freedom is limited by the number of free-time activities (something largely rectified in the game's sequel), but the open-world structure allows for a very peaceful personalization, a type of volition unknown prior to this game.