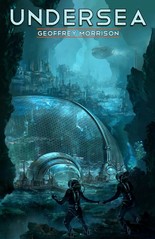 The music in the bar was loud. Thom’s view was horizontal, from bar level, his face resting in a warming puddle of alcohol. He saw himself in the mirror at the end of the bar and smiled. Then he noticed the comm on his reflected ear blinking. Maybe that was what had woken him up. Maybe it was the cute girl he had driven down here that morning. Maybe she was done early and wanted to get some drinks. He raised his left hand quickly, and rapped it against the underside of the bar. In the din, no one heard him swear profusely. This time, slowly, watching his progress in the mirror, he reached up with his right hand and tapped the comm. It burst to life.

“Pilot, where are you?” It was the girl, alright. Man, she sounded pissed.

“Hi there, Ralla. I’m at…” he turned his head around to try to look at the bar’s entrance behind his other shoulder and twisted his way completely off the barstool and onto the floor. “Well, I’ll tell you, Ralla. I’m on the floor.” He heard what sounded like alarms in the background as she spoke. He liked her hair. It was bouncy. Wait, he thought, did she just call me “Pilot?”

“OK, I’m a few levels above you in the command center.” He didn’t think she understood what he had meant by… “I need you to—”

He looked around to make sure it wasn’t just in his head, and from his vantage point, all the legs had stopped dancing, and the music was quickly muted. There was another explosion, this one louder, and he could feel it in the floor. Adrenalin did the best job it could sobering him up. He made his way to the top of the bar stool as everyone started to file out into the street. Alarms started going, and everything took on a new urgency.

“Thom, can you hear me?” Another explosion, this one shaking the ground enough that he had to grip the stool to keep from falling. Bottles of alcohol fell from shelves shattering on the floor.

“I’m in a… restaurant,” he finally replied. “I think they call this area B-Block. It’s on the far side of the city from where we came in. Where are you?”

“I’m in the central tower. Meet me here. We have to get back to the shuttle.”

“On my way,” he said, tapping the comm off. As he made his way down the bar, he downed two half empty glasses of water before polishing off a shot that someone had left at the end. “Well, that probably wasn’t a good idea.”

He exited to the street into complete pandemonium. People were trying to move in every direction, blocking others trying to go in the opposite direction. He was bumped, shoved, and eventually pushed stumbling into a dead end and empty side alley. He promptly threw up. Twice.

The alley spun only slightly, but he noticed boxes stacked up a wall. Climbing these, he was able to make it to the roof of the single story structure. Above him he could make out little flashes of light in the darkness outside the dome. He never wanted to be sober more in his life. He jogged across the roof, leapt a narrow alley, and jumped onto the next roof. The corrugated steel and composite rooftops made an unhealthy clamor as he scurried across.

It was easy grabbing onto the roof of the next building, and hauling himself up. Then there were ladders and no more alleys. He made good time, and was soon at the central building, roughly twelve stories above ground level. The city spread below him, and the dome seemed very close. Below, the mine was emptying out and the streets were wall-to-wall people, trapping themselves in their own traffic.

He jogged across the last rooftop, and crawled through a window in the central tower. The exercise was doing wonders for his head. As he entered the stairwell, he keyed the comm again.

“Five, they have a tiny command center with… No, No! Didn’t you hear me?!” she barked to someone else. “Get up here quick, pilot. We need to get out of here.” The comm clicked off. Up. Ha! And what’s with this pilot crap again? In the stairwell, he touched the middle step in each flight, the landings, and that was it. He pulled the door open to the command center to a scene of slightly more organized chaos than what was going on outside. He spotted the diminutive Ralla, her curls with a mind of their own as she pivoted this way and that. Terrified-looking personnel jostled around her. Thom looked behind Ralla at one of the dozens of screens set around the room. There was a mass the size of the Uni baring down on the dome, but from the wrong direction. Another burst of adrenalin, this time brought on by pure, unadulterated panic. Ralla saw him and pushed her way to him through the swarm of people.

“Well, I’m not going to say no,” he said as carefully as possible. She pushed past him and headed down the stairs. He followed, and they made it two landings before the worst explosion yet knocked them off their feet. A new alarm sounded in the distance. Ralla stood and was about to start down the stairs.

“Stop!” Thom shouted. She looked at him with distain, and then looked back down the stairs, about to go. “No, wait,” he said, and grabbed her by the arm. She tried to fight him off, but he half dragged her out of the stairwell into the office space at that level. They made their way past the desks, and as they neared the windows she wasn’t fighting him, but pushing past him. They got to the windows, and had a clear view down the street towards the main lock. Above and to the left, just over the top of the far buildings from their view, was a gaping hole in the dome, a steady torrent of black and green water flooding in. Already there was water in the streets, and people were running en masse away from the lock. Thom and Ralla stood in shocked silence for a moment, then Thom turned away from the window.

“Come on,” he said with as much authority as his slightly slurred speech would allow. They got to the stairs and he started to go back up. She came to a halt. “Trust me, I know what I’m doing.” She took one last look down the stairs, and then followed him up.

They made good time back up to the twelfth floor, both out of breath but running on panic. They went out a different window, and then down the ladders, dropping from roof to roof across the city. They tried not to look at the deafening surge from the dome or the accumulating water on the floor.

“The lock is probably still dry,” he shouted over the noise. “We can operate the outer doors from the sub. All we have to do is get down there and open this door. With any luck, we’ll be able to walk over to the sub with the water around our ankles as it fills up.” He turned back towards the area where the entrance to the lock supposed to be, now submerged under churning dark water. The city now looked to be surrounded by an ever-growing moat.

“And without any luck?” Ralla replied.

“We swim and hope the sub will let us open the hatch when it’s submerged.” Thom looked back at Ralla, and ’wasn’t expecting the look of fear. He took her by the shoulders. “Look, easy swim to the wall, then I’ll dive down and open the door. Then you just have to go with the current. We’ll be safe inside the sub in no time.” She nodded, but looked terrified. The water crested over the top of the roof, reaching its tendrils out to their feet. The thunder of the waterfall was all encompassing. They were close enough to feel the spray.

They jumped and were almost instantly numb. At this depth, the water was near freezing. They both knew they had minutes. Maybe less. There wasn’t much of a current preventing them from getting to the dome wall, which they reached with ease.

“OK, you can stay here. I’ll get the door open,” Thom shouted to her. Her lips were blue. She grabbed his arm before he submerged.

“We go together,” she said definitively. He nodded. They took a series of deep breaths, and pulled themselves down the dome wall. The outer door to the foyer was open, and they were able to pull themselves across the bulkhead towards the console. It was still lit. Beyond, they could see the shuttle lit and dry in the bay. Thom looked across the console, but couldn’t find anything. Ralla pushed past him and hit a series of buttons. Half the console lit up red, but she continued. They could hear a new siren gurgling to make itself heard underwater, and then a rotating red light came on above the lock door. Thom’s lungs burned. Ralla looked back at him, eyes wide at the moment they both realized their folly.

The lock doors snapped open, creating a vortex sucking in water and two people into the bay. They were launched halfway across the open space before the amount of water that had entered with them became spread too wide to be deep. They gasped for air for a moment, and then started towards the sub, shivering.

The water level was increasing rapidly. By the time they stumbled their way to their sub, it was already lapping around Ralla’s waist. The rushing water from the entry lock was nearly as loud as the waterfall had been outside.

Thom reached the panel first, and slammed his fist against it when the sub denied him the ramp. Ralla shuffled up next to him. As Thom struggled with the panel, the water neared her neck level, a full head lower than his.