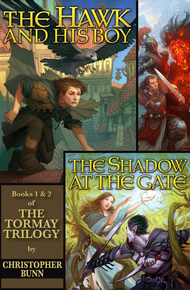 Jute can break into any house, climb any wall, and steal anything--and he just got hired for what he thinks is an easy burglary job. The only problem is, if he succeeds, the Thieves Guild is going to murder him. He just doesn't know that. Not yet. Being a thief always came easy for him, but it's a lot harder now, particularly when everyone wants him dead.

Hiding out in the city of Hearne, Jute finds some strange allies in an old wizard and a talking hawk. Together, they uncover an ancient secret of terrifying power. All Jute needs to do is stay alive long enough to figure out why's there's a price on his head, why a deadly shadow is stalking him, and why the Dark is haunting his dreams. Also, why on earth is the wind talking to him?

The Hawk And His Boy is the first book of The Tormay Trilogy. The trilogy continues with The Shadow At The Gate, and concludes with The Wicked Day.

Chapter 1: Down the Chimney

The man raised his fist again.

The boy dabbed at his cut lip and then touched the wall. His fingertips were greasy with blood. The alley they stood in was narrow, but the moon shone down from overhead, glimmering on the stones of the wall. The sweet scent of selia blossoms filled the air.

“I need to get a feel for it first,” said the boy sullenly.

Only a fool would climb without trying to understand a wall first. No telling what would be there. Ward spells woven into the stones. Holds and ledges that were illusions, melting away once your weight was on them. He leaned his forehead against the wall and closed his eyes. The stones were still warm from the day’s sunlight. And something else.

The boy cinched the knapsack on his back tight and began to climb. He was the best of the Juggler’s children. The tiniest edge of rock was a foothold or a handhold to him. If he had been given a wall reaching up to the sky, he could have climbed it. Even up to the stars.

He listened as he climbed. Wavering focus could result in injury or death. Eight feet above the ground, he heard the first whispers of the ward spells contracting, weaving themselves tighter and waiting for the intruder. He froze into silence. He thought of the emptiness of sky, where even the wind blows in silence. He recalled a memory of night, mute with stars and darkness. The wards relaxed, hearing the same silence inside the boy. They became still, waiting for a real intruder, someone of noisy flesh and blood, not this shadow of a boy.

He climbed higher. Perhaps there would be some coins for the night’s work. Maybe the Juggler’s temper would hold good for a few days. After all, surely this was an important job. More important than purses stolen in the markets, or rings slipped from the fingers of ladies strolling the promenades. How else to explain the presence of the Knife? He was not one to bother himself with the Juggler and his pack of children.

It was a high wall, but it wasn’t a hard climb. After a few minutes, he reached the gutter and swung up over it. He crept up to the peak of the roof and peered over. An enclosed garden sprawled below. Moonlight shone on bushes and trees. From what the boy could observe, the house was built along the lines of a large rectangle—three stories in some places, four in others—with a tower that surmounted it all on the eastern end.

He took some rope from his knapsack, tied a loop around the chimney, and tossed the free end down to the alley below. It did not take long for the man to climb up. The boy eyed him as he crept over the side of the roof, hungry for any sign of weakness. But Ronan of Aum had not become the Knife of the Thieves Guild by being weak. The boy shivered and rubbed his palms down the sides of his pants.

Only a fool would have said no to the Knife. But the boy had almost refused when the Juggler had approached him earlier that afternoon. He had felt the no trembling in fear on the tip of his tongue. The Knife needs a boy to do a chimney job tonight, the Juggler had said. Up a wall, down a chimney, into a sleeping house. As easy as that. The boy knew he could not say no. Not with the Knife involved.

When did the Knife ever have need for one of the Juggler’s children? They were cutpurses and pickpockets. They were the whispers and breezes that ran through the marketplaces and the bustling streets of the Highneck Rise district where the lords and ladies came to shop. They were the children that came home to the Juggler with pockets full of coins and the lace handkerchiefs of ladies and the odd key ring or two. Some were climbers, like the boy, but that was done more in fun than anything else. Lazy afternoons in back of the Goose and Gold when the Juggler was snoring drunk on his bed. Scaling the wall there, with only the stableman to shout at them every now and then.

The Knife. The boy had seen him once before. One of the older children had pointed him out, a tall man walking into the Goose and Gold. The Knife. More blood on his blade than any man in Hearne. Slide up to you closer than your shadow. Slit your throat and be halfway to Dolan before you even knew you were dead. Steal the regent’s eyes right out of his head.

The boy watched the man creep up through the darkness, up and across the roof toward him. Not creep. Flow. It was as if the Knife was made out of liquid shadow. He flowed. And settled next to the boy against the chimney.

A scornful smile crossed the man’s face. He pulled the rope up after him.

“Do you remember everything I told you?” he said.

“Yes, sir,” said the boy. How could he forget? The two of them had sat the boy down in a back room at the Goose and Gold and gone over every detail until he could have recited them in his sleep.

“In the room at the top.” The Knife pointed at the tower rising from the far corner of the manor roof. “Remember, boy. Don’t open the box. If you do, I’ll cut your throat open so wide the wind’ll whistle through it.”

The man tossed the free end of the rope down the chimney. Jute clambered up onto the chimney ledge and then lowered himself into the shaft. Narrow, but not impossible for someone as thin as he was. It was obvious no one had lit a fire below in months, for it was the end of summer now. Only a dusting of soot coated the walls.

Jute climbed down into darkness. Wary. Listening. Tense with the effort of both focusing and trying to ignore fear at the same time. He rested halfway down the chimney, with his back wedged against one wall and his feet pressed against the opposite. The moon peered down at him through the tiny square of sky far above.