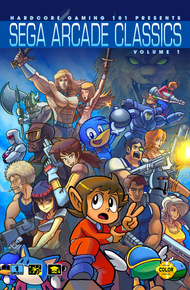 A wondrous trawl through some of the all-time classic Sega titles, with crisp factual detail on a multitude of arcade and home versions of titles like Altered Beast, OutRun, Space Harrier, Golden Axe and more. – Simon Carless

When I was five years old, I received a Sega Master System from a relative, and I became a fan for life. In first grade composition class, I wrote an eight page story on the further adventures of Alex Kidd. Every assignment I wrote was tied to Sega in some way – there were stories about Penguin Land and Wonder Boy, and I somehow even connected Double Dragon to St. Patrick's Day.

In the twenty five-odd years since my days at elementary school, my obsession hasn't really died down all that much, as this volume can attest to. But it's not due only to mere nostalgia – look over Sega's arcade output during the 1980s and 1990s and you'll find that it reads like a "best of" compilation from the era. Many of the games are most definitely artifacts of the time, with themes based off popular movies like Aliens, Top Gun, and Conan the Barbarian, yet that in no way lessens their impact, or even their quality.

This volume seeks to explore what makes these games so fascinating. Games like Space Harrier, After Burner, and OutRun pushed the boundaries of technology with Sega's "super scaler" technology. Shinobi and Golden Axe took ideas from other popular games – Namco's Rolling Thunder and Technos' Double Dragon, respectively – and refined them into substantially better games. Fantasy Zone featured some of the most colorful, imaginative

graphics of the time, while Altered Beast, the polar opposite on the "cute" spectrum, begged console gamers to upgrade to Sega's 16-bit Genesis system.

The criteria for the games selected in this volume revolved mostly around how prolific the games were, based on how many sequels or ports they received. All of their offshoots are also covered in great detail, including obscure mobile releases and fan games. All of these were born in the arcades, with the exception of Alex Kidd, which began on the Master System (though his arcade game was released shortly afterward). Obviously, this book only scratches the surface of Sega's games. There are many fantastic titles from the company that will be covered in future volumes, including its earlier arcade games, its lesser known titles and, of course, its home consoles.