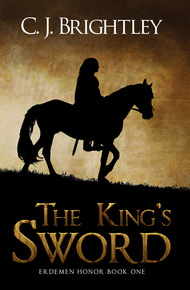 I love the possibilities in fantasy, the creativity and exuberance and wisdom in a beautiful story. My heroes are heroes you can believe in, characters who aren't perfect but who believe in doing the right thing. They're wonderfully fun to write about, and they're not entirely fictional. You may know one or two without even realizing it. One of them may be you.

I live in Northern Virginia just outside Washington, DC, with my husband, young children, and our sheltie mix. They keep me pretty busy, but in my "free time" I write, read, make jewelry, and bake. I've also been involved in various martial arts for over 20 years, and I love teaching karate. I primarily write fantasy. My darkish urban Christian fantasy Things Unseen was recently a #1 bestseller on the Christian Fantasy list on Amazon.

The King's Sword by C.J. Brightley

A disillusioned soldier. A spoiled, untried prince. A coup that threatens the country they love.

When retired soldier Kemen finds the young prince Hakan fleeing an attempted assassination, he reluctantly takes the role of mentor and guardian. Keeping the prince alive is challenging enough. Making him a man is harder.

As usurper Vidar tightens his grip on power, Kemen wrestles with questions of duty and honor. What if the prince isn't the best ruler after all?

Invasion looms, and Kemen's decisions will shape the fate of a nation. What will he sacrifice for friendship and honor?

I love it when good books take me by surprise, and that's what happened with The King's Sword. It's classic fantasy told through the viewpoint of an outcast who must find within himself the willingness to be a loyal soldier yet again. It's historical fiction about a land that doesn't exist. It's a coming-of-age tale alongside a coming-to-terms journey. It's a smooth and satisfying read that highlights what good people can do when honor is chosen, the hard path taken, and the deepest fears faced. – Blair MacGregor

I crossed his tracks not far outside of Stonehaven, and I followed them out of curiosity, nothing more. They were uneven, as if he were stumbling. It was bitterly cold, a stiff wind keeping the hilltops mostly free of the snow that formed deep drifts in every depression. By the irregularity of his trail, I imagined he was some foolish city boy caught out in the cold and that he might want some help.

It was the winter of 368, a few weeks before the new year. I was on my way to the garrison at Kesterlin just north of the capital, but I was in no hurry. I had a little money in my pack and I was happy enough alone.

In less than a league, I found him lying facedown in the snow. I nudged him with my toe before I knelt to turn him over, but he didn't respond. He was young, and something about him seemed oddly familiar. He wasn't hurt, at least not in a way I could see, but he was nearly frozen. He wore a thin shirt, well-made breeches, and expensive boots, but nothing else. He had no sword, no tunic over his shirt, no cloak, no horse. I had no horse because I didn't have the gold for one, but judging by his boots he could have bought one easily. There was a bag of coins inside his shirt, but I didn't investigate that further. His breathing was slow, his hands icy. It was death to be out in such weather so unprepared.

He was either a fool or he was running from something, but in either case I couldn't let him freeze. I strode to the top of the hill to look for pursuit. A group of riders was moving away to the south, but I couldn't identify them. Anyway, they wouldn't cross his path going that direction.

I wrapped him in my cloak and hoisted him over my shoulder. The forest wasn't too far away and it would provide shelter and firewood. I wore a shirt and a thick winter tunic over it, but even so, I was shivering badly by the time we made it to the trees. The wind was bitter cold, and I sweated enough carrying him to chill myself thoroughly. I built a fire in front of a rock face that would reflect the heat back upon us. I let myself warm a little before opening my pack and pulling out some carrots and a little dried venison to make a late lunch.

I rubbed the boy's hands so he wouldn't lose his fingers. His boots were wet, so I pulled them off and set them close to the fire. There was a knife in his right boot, and I slipped it out to examine it. You can tell a lot about a man by the weapons he carries. His had a good blade, though it was a bit small. The hilt was finished with a green gemstone, smoothly polished and beautiful. Around it was a thin gold band, and ribbons of gold were inlaid in the polished bone hilt. It was a fine piece that hadn't seen much use, obviously made for a nobleman. I kept the knife well out of his reach while I warmed my cold feet. If he panicked when he woke, I wanted him unarmed.

I felt his eyes on me not long before the soup was ready. He'd be frightened of me, no doubt, so for several minutes I pretended I hadn't noticed he was awake to give him time to study me. I'm a Dari, and there are so few of us in Erdem that most people fear me at first.

"I believe that's mine." His voice had a distinct tremor, and he must have realized it because he lifted his chin a little defiantly, eyes wide.

I handed the knife back to him hilt-first. "It is. It's nicely made."

He took it cautiously, as if he wasn't sure I was really going to give it back to him. He shivered and pulled my cloak closer around his shoulders, keeping the knife in hand.

He reached for the bowl with one hand, and seemed to debate a moment before resting the knife on the ground by his knee. "Thank you." He kept his eyes on me as he dug in.

I chewed on a bit of dried meat as I watched him. He looked better with some warm food in him and the heat of the fire on his face. "Do you want another bowl?"

"If there's enough." He smiled cautiously.

We studied each other while the soup cooked. He was maybe seventeen or so, much younger than I. Slim, pretty, with a pink mouth like a girl's. Typical Tuyet coloring; blond hair, blue eyes, pale skin. Slender hands like an artist or scribe.

"Thank you." He smiled again, nervous but gaining confidence. He did look familiar, especially in his nose and the line of his cheekbones. I tried to place him among the young nobles I'd seen last time I'd visited Stonehaven.

"Hak-" he stopped and his eyes widened. "Mikar. My name is Mikar."

He looked a bit like his father the king. It wasn't hard to guess why he was fleeing out into the winter snow. Rumors of Nekane Vidar's intent to seize power had been making their way through the army and the mercenary groups for some months.

His shoulders slumped a little. He looked at the ground and nodded slightly.

He had no real reason to trust me. Vidar's men would be on his trail soon enough. No wonder he was frightened.

"My name is Kemen Sendoa. Call me Kemen." I stood to bow formally to him. "I'm honored to make your acquaintance. Is anyone following you?"

His eyes widened even more. "I don't know. Probably."

"Then we'd best cover your tracks. Are you going anywhere in particular?"

I stamped out the fire and kicked a bit of snow over it. Of course, anyone could find it easily enough, but I'd cover our trail better once we were on our way. A quick wipe with some snow cleaned the bowl and it went back in my pack.

He stood wrapped in my cloak, looking very young, and I felt a little sorry for him.

"Right then. Follow me." I slung my pack over my shoulder and started off. I set a pace quick enough to keep myself from freezing and he followed, stumbling sometimes in the thick snow. The wind wasn't quite as strong in the trees, though the air was quite cold.

I took him west to the Purling River as if we were heading for the Ralksin Ferry. The walk took a few hours; the boy was slow, partly because he was weak and pampered and partly because I don't think he understood the danger. At any moment I expected to hear hounds singing on our trail, but we reached the bank of the Purling with no sign of pursuit.

"Give me your knife."

He gave it to me without protest. He was pale and shivering, holding my cloak close to his chest. I waded into the water up to my ankles and walked downstream, then threw the knife a bit further downstream where it clattered onto the rocks lining the bank. Whoever pursued him would know or guess it was his, and though the dogs would lose his trail in the water, they might continue downstream west toward the Ferry.

"Walk in the water. Keep the cloak dry and don't touch dry ground."

"Why?" His voice wavered a bit, almost a whine.

I felt my jaw tighten in irritation. "In case they use dogs." I wondered whether I was being absurdly cautious, whether they would bother to use dogs at all.

He still looked confused, dazed, and I pushed him into the water ahead of me. I kept one hand firm on his shoulder and steered him up the river. Ankle-deep, the water was painfully cold as it seeped through the seams in my boots. The boy stumbled several times and would have stopped, but I pushed him on.

We'd gone perhaps half a league upriver when I heard the first faint bay of hounds. They were behind us, already approaching the riverbank, and the baying rapidly grew louder. I took my hand from the boy's shoulder to curl my fingers around the hilt of my sword. As if my sword would do much. If they wanted him dead, they'd have archers. I was turning our few options over in my mind and trying to determine whether the hounds had turned upriver or were merely spreading out along the bank, when the boy stopped abruptly.

He shook his head. "They're my dogs. They won't hurt me."

I grabbed the collar of his shirt and shoved him forward, hissing into his ear, "Fear the hunters, not the dogs! You're the fox. Don't forget that."