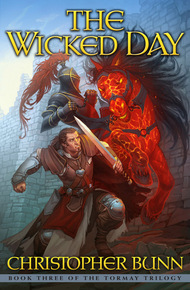 The Tormay Trilogy - Book 3: The Wicked Day by Christopher Bunn

Tracking the kidnappers of Giverny Farrow, Jute and his friends discover the Dark is on the march. A long-forgotten enemy has emerged from the pages of history. The land of Tormay must be warned in time before it is too late.

In the city of Hearne, Owain Gawinn desperately tries to ready his forces for the coming battle. Little does he know that treachery is stirring within the gates. Tormay teeters on the brink of war, and the duchies look to Jute as their last hope. But there is an ancient evil waking that even all the power of the wind cannot hope to defeat.

With the hawk, the cantankerous ghost and the assassin Ronan at his side, can Jute save Tormay? On one final, stormy day, the fate of the land will depend on his choice...

Excerpt from The Wicked Day

“Tracking isn’t so difficult,” said Declan. “Once you know what to look for. Now, you see? Giverny stepped here, perhaps a day ago, I’d say.”

He knelt down on one knee and touched a broken and withered blade of grass. Jute peered over his shoulder.

“It doesn’t look like much of anything at all,” he said. “That could’ve been a rabbit. Or one of those hedgepigs.”

“They’re called hedgehogs, and it wasn’t either.”

“If it’d been a rabbit, then we could’ve tracked it and had it for breakfast,” said Jute.

He was not in a good mood that morning and, as far as he was concerned, he had reason. To begin with, he was still smarting over an incident that had occurred the evening before. Despite the hawk’s warning, he had ventured higher into the air than he ever had. Floating up, his feet had been higher than Declan’s head. But then he fell. It knocked the wind out of him and he could only lie there, wheezing in pain, while the other three laughed.

To make matters worse, the ghost had sat up half the night, perched by his head and telling tales about people who had died of chest ailments. “Wheezed just like you did,” said the ghost. “It reminds me of old Booley’s death. An, airy, whistling sort of rasp. Not an unpleasant sound, mind you. Sometimes, there was a bit of a juicy gurgle in it, particularly right before he died.”

And then, in the morning, there had been only some stale bread and an onion for breakfast. Jute could still taste the onion.

Declan sighed. “If we hurry, we can hunt later in the day. Meat for dinner. But for now, we’re still too far behind on her trail.”

Declan looked where Jute was pointing. Far off on the horizon, a thin dark line was visible.

“Your eyesight’s improving,” said Declan. “I can barely see that.”

“What? I don’t see anything,” said the ghost.

As they hurried along, the dark line grew rapidly until Jute could see the trees. He had seen trees before, as there were some in Hearne, of course, behind the walls of the rich manors in Highneck Rise. And there had been trees on the coast when they had journeyed north, pines and little, twisted cypress. But the trees of this forest were different.

“They’re enormous,” said Jute, forgetting for a moment that he was determined to be grumpy until he had a decent meal. “And the forest—does it go on forever? The sky, the sea, this plain, now the forest. Everything’s so big.”

On his shoulder, the hawk chuckled.

“There’re things in this world bigger than all of those.”

The trail of the girl and the wolf drew them closer to the forest. The trees loomed higher, and beyond them, pale against the sky, were the snow-covered tops of the mountains.

“Wait,” said the hawk. His head turned this way and that.

Declan touched the hilt of his sword. He frowned. “My nose tells me nothing, master hawk, but if I’d have known if we crossed such a path. If an enemy’s in sight, then I fear we’ve already been seen. This plain is no place to hide, so let’s continue on our trail. Doubtless, it’ll lead into the forest and either the trees will hide us or something waits in its shadows.”

“The Forest of Lome,” said the ghost. “Hmmph. I recall something distinctly unsavory about the place.”

“What?” said Jute nervously. “What do you remember?”

He was not sure whether he liked the look of the trees. The edge of the forest stretched away on either side further than he could see. Even though the sun was high in the sky, deep shadows lay beneath the treetops. It seemed to Jute as if they awaited the departure of the sun so that they could spill out from among the trees and join the night.

“I don’t remember. At least, not precisely.”

“Probably all those and much more. Undoubtedly.”

“Must you be giving Jute notions?” said the hawk. “Kindly restrain yourself.”

“Very well,” huffed the ghost. “As no one appreciates my conversation, I think I’ll take a nap. Wake me up when someone says something intelligent.” And with that, the ghost vanished. Jute felt a quick, cold breath against his neck and heard the ghost grumbling to itself inside his knapsack.

Declan shook his head. “I’m afraid he’ll pipe up at the wrong moment when silence is our best defense. There must be some way of keeping our unfortunate friend quiet.”

“I heard that,” said the ghost angrily.

They reached the edge of the forest. Jute touched the trunk of a tree and gazed up. The trees were taller than he had thought. He could hear the wind murmuring in the tree tops. The shadows were cool and still. Dry leaves crunched underfoot.

“I don’t have your nose for such things, master hawk,” said Declan, “but I trust your word. Walk in my footsteps, Jute, and keep your voice low. And ghost, for once, keep silent.”

“I heard that,” said the ghost from inside Jute’s knapsack, but it whispered as if, for once, it understood what might be at stake.

Declan loosened his sword in its sheath and then plunged deeper into the forest. He walked with his head forward, turning from side to side, eyes flicking down to the ground and then back up, searching through the gloom and the trees for whatever was there and whatever had been there. Jute hurried after him. Even though he was smaller and lighter than the man, he made more noise as he walked: twigs snapping, leaves crunching, and bushes rustling as he sought to thread his way through. Declan turned and frowned at him.

The trail led them deeper into the forest. The silence and the shadows grew as they went. Jute could hear the ghost mumbling to itself inside his knapsack. In front of him, Declan halted.

“What is it?” said Jute. He sniffed the air. It smelled odd. Somehow wrong.

“Something evil’s come this way,” said Declan quietly. “You’re right, master hawk. The Dark has been here. Not so long ago. A strange track. This print here looks like a deer, yet the next step is something different. And the stride’s too long.”

“The smell of it’s fading,” said the hawk. “A day ago, perhaps. How odd. It’s a mix of blood and darkness and something else. Stop quivering, Jute.”

Jute clamped his mouth shut. He was afraid his teeth were about to start chattering. He had the feeling that something was watching him. Something in the darkness, a shadow standing behind a tree. Something perched in the branches overhead and staring down through the leaves.

“Did someone say blood and darkness?” said the ghost, popping its head out of Jute’s knapsack.

“And look here,” said Declan, kneeling on the ground. “These are Giverny’s prints. I think this thing, whatever it is, was tracking my sister.”

They made greater speed then. Declan ran, one hand steady on the hilt of his sword and the other keeping his cloak close about him. Jute was hard pressed to keep up. The hawk flung himself from the boy’s shoulder and flew through the darkness. Jute was sure the bird would crash into a branch at any moment, for the trees grew close together and their branches wove together with those of their neighbors into an impenetrable and continuous thicket. But the hawk flashed in and out of the branches and for periods of time vanished deeper into the forest, ranging far from them on either side, only to appear once again in a silent flurry of wings. They came to a clearing in the forest, wide enough so that the gloom was relieved by sunlight. Overhead, blue sky was visible. The hawk flapped his way up toward it and was gone. Declan stopped below an oak.

“She was here. Up in this tree.” He stepped back, looking up into the branches. “Whatever’s tracking her was here too.”

“There’s a broken branch on the ground,” said Jute.

“And blood,” said the ghost. It reappeared and crouched down on the ground. “Ooh. Look at that—though, not much, I’m afraid.”

“I’m a ghost. I don’t disturb anything.”

“Human blood,” said Declan after a while. His face looked pale beneath his tan. The hawk landed on the ground and settled his wings.

“There’s a storm advancing from the east,” said the hawk. “Dark clouds over the mountains. It’ll be on us before the evening and you’ll lose the trail, yes?”

And so they went on, following the trail through thickets and brambles and through the shadows beneath the treetops.