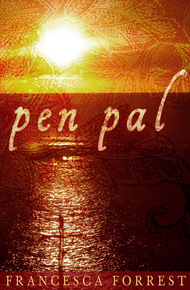 Francesca Forrest has lived in the United States, England, and Japan, and used to boast about having given birth to children on three continents. If she'd started earlier, she might have tried for births on the rest. Currently she works as a copy editor, spending as much of her free time writing as possible. She's had short stories and poems published both online and in print, but Pen Pal is her first published novel. She also volunteers as a tutor in a medium-security jail and has helped with a program to make children's books available in the various mother tongues spoken in Timor-Leste. She loves knowing which plants in a landscape are edible and the folk names of wildflowers.

Pen Pal starts with a message in a bottle and ends with revolution.

Em, a child from a floating community off the Gulf Coast, drops a message into the sea. It ends up in the hands of Kaya, an activist on the other side of the world, imprisoned above the molten lava of the Ruby Lake. Em and Kaya are both living precarious lives, at the mercy of societal, natural, and perhaps supernatural forces beyond their control. Kaya's letters inspire Em, and Em's comfort Kaya—but soon their correspondence becomes more than personal. Individual lives, communities, and the fate of an entire nation will be changed by this exchange of letters.

Pen Pal is a story of friendship and bravery across age, distance, and culture, at the intersection of the natural and supernatural world.

From the first lines of Pen Pal, I was utterly charmed by the voice, the setting, the character, and the message-in-a-bottle premise. But the captivating whimsy of the opening soon tightens into deadly urgency. What makes Pen Pal a real treat from beginning to end is Francesca's ability to plunk non-existent places, unacknowledged gods, and a political uprising fueled by the earth's fires smack in the middle of what otherwise might be our own mundane world. – Blair MacGregor

Chapter 1. Letter in a Bottle

Dear person who finds my message,

I live in a place called Mermaid's Hands. All our houses here rest on the mud when the tide is out, but when it comes in, they rise right up and float.

They're all roped together, so we don't lose anyone. I like Mermaid's Hands, but sometimes I wish I could unrope our house and see where it might float to. But I would get in trouble if I did that, so instead I'm sticking this message in a bottle. If you find it, please write back to me at this address. Tell me what the world is like where you are.

Today Ma used up the last of the cough medicine on Tammy, and I rinsed out the bottle. It was a good, small size, and I decided today was the day to send out my message. Small Bill helped me row out far enough to see the free and open ocean.

"It's probably just gonna bob around here. Least it won't sink," he said, examining the corks that I put all around the outside of it, held on by electrical tape. "Not until the stickum wears off the tape, anyway. Maybe the dolphins will play with it. Maybe they'll pass it on to the seapeople. You want it to go to the seapeople, or people up here?" He waved his hand at the sea, but he was meaning the folks on the shrimp boats and the big cargo ships, and the ones out on the oil rigs, too.

"Well, either way, but I want someone to write back," I said. "Wish I could be the message … Go visit the seapeople, or go see some new place above-water."

"You want to leave here?"

"Not for good! Just to look around. Just to see stuff with my own eyes. Haven't you ever wanted to visit the seapeople?"

Small Bill shrugged. "Maybe the seapeople. Don't think I need to meet any more dry-land people, though. You want me to throw that for you?"

"No, I want to do it myself." I stood up real carefully, so I wouldn't capsize the dinghy, and threw the bottle as far as I could. "Don't say, 'Not bad, not bad,' like you're the king of good throws," I warned.

"Not sure you threw it far enough for 'not bad,'" Small Bill said, grinning, and then I nearly did capsize the dinghy trying to spill him out of it, but he was lodged in as good as a hermit crab in its shell. So we rowed back and played tag with everyone else for a while, and Small Bill's mom gave me a bundle of dried leaves tied with cordgrass twine. Ma only likes dry-land medicine that comes in bottles, but Dad'll make those leaves into a tea for Tammy.

And now I wait to see if anyone gets my message in a bottle.