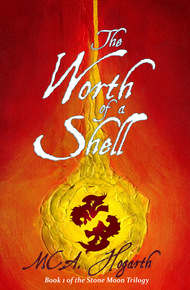 The Worth of a Shell by M.C.A. Hogarth

Born to a harsh world, we Jokka have evolved three sexes to survive: neuter, male and female. Twice in our lives we may change from one to another. A change we accept with grace... or resignation. It was our way. ...until one female defied all tradition: Dlane Ashoi-anadi, revolutionary, intentionally childless, runaway.

This is not her story.

I am Thenet Reña-eperu, female-guardian, voice of orthodoxy... and Dlane's first and dearest companion. This is the tale of how we changed each other... and how that changed everything.

Book 1 of the Stone Moon Trilogy (continues with Book 2: Pearl in the Void, and Book 3: A Bloom in the North).

I became acquainted with Maggie through her strong and well-thought-out advocacy of indie writers and diverse publishing options, and soon discovered her fabulous talent as a writer and an artist. The first novel of hers I read pulled me into a non-human world alive with distinct cultures, sensory depth, and the harsh consequences of daring to want life outside society's limitations. That novel, The Worth of A Shell, is in this bundle so you can make that the same discovery I did. – Blair MacGregor

We stood in silence, enveloped in the cool hand of the forest. Dlane gulped at the air, sounding alarmingly like she trying not to sob.

"Will it ever end?" she asked, the intonation that might have made it a question failing. "You've killed fourteen beasts and saved me from two searchers. How much longer can we be so lucky?"

"This isn't luck, ke anadi," I said, pulling her into my arms and resuming our course down the stream. She did not resist.

"And now without food or clothing or even your spear! How will we survive?"

"As Jokka always have. Through skill and intelligence, and perhaps the will of the Trinity."

"The Trinity," she said bitterly. "What Trinity? What gods?"

"Hush, ke anadi, you're talking nonsense," I said. She could take many things from me, my anadi, but my faith in the Brightness, World and Void… that she would not have.

Perhaps she sensed my rejection… whatever the case she rested against my chest without speaking. Her body was damp, and the soft hairs cloaking her feet had curled from the run. I found a rhythm and strode down the ravine, trying not to disturb the water.

"Intelligence," Dlane murmured. "Always intelligence. If it is intelligence through which we survive, why do we destroy it in a third of our population?"

I opened my mouth, then frowned. "We do not destroy intelligence, ke anadi."

"Yes we do," Dlane said. "Breeding the anadi. It kills their minds."

Exasperated, I asked, "And the alternative? Shall we get children on animals?"

"In the end, that is exactly what we do," Dlane said. "And I would end up as intelligent and malleable as a ñedsu. Point me in a direction and give me a simple command, and wailing and moaning I follow."

The image so revolted me I stumbled.

"What can I say?" I said. "What would you have us do? If we did not breed, we would grow old. There would be no laughter of the young to sustain us. The last of us would finally die and there would be no Jokka. The wind would chase clean the fields we tended, the towns we built, scour them from the earth, and it would be as if we never lived. What would the world be then?"

"A world without Jokka!" I didn't stop because the motions had become mechanical, beyond my control. I walked because stopping, I would fall. "I cannot fathom it! Dlane… we are our race."

"Why does it matter so much to you?" she asked, golden eyes rising to mine. I did not spare a glance for her; to do so would be to drown in the gold, to acknowledge her utter earnestness. To acknowledge that she could hold the death of our race in her mind with enough detachment to measure whether it was good or bad. "You will die, Thenet… and after that, you will know no more, or at least have no more concern with the Jokka."

"How do you know?" I asked. "My death will not make me any less a Jokkad."

"You'll be dead, Thenet. The only Jokku thing about you then will be your corpse, and even that will rot away and return to the earth," Dlane said.

I almost dropped her.

"When I die," I said, staring down at her, "I will be embraced by the World. It will help me to my feet and anoint me with the paint and long-cloth of the Earth and Wind. It will give me eyes of the Sky, so that I may hold the Brightness without blinking, and scales of stars that I may be held by the Void without shivering. With a spear I will hunt the unmaking spirits with all my comrades at my side, and make safe the World for the Jokka still living."

Dlane said, "For all eternity."

"For all eternity," I agreed.