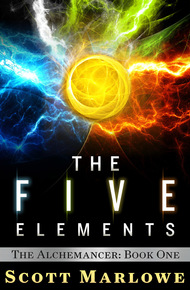 Scott Marlowe is an engineer, an outdoor enthusiast, and a weaver of tales that often end in wondrous, explosive mayhem. He holds degrees in Computer Science Engineering, Comparative Literature, and English from the University of California, Davis. He is the author of the Alchemancer and Assassin Without a Name fantasy series.

Scott lives in Texas, where he drinks copious amounts of strong coffee and rides his mountain bike whenever the opportunity arises.

The Five Elements by Scott Marlowe

Aaron wants nothing more than to study his tomes, perform his experiments, and spend time with his closest friend, Shanna. Substitute the occasional romp about the city for the books and plenty of games of crutchit for the smelly alchemicals, and Shanna is just fine with that too.

But such routines are thrown into chaos when an elemental attack levels their home. Aaron thinks Shanna killed, while Aaron himself is forced to flee for his life. For Shanna, who survives that fateful night, the greatest adventure of her life is about to begin. Only the worst of nightmares awaits Aaron: pursued by dwarves, hell hounds, and a demon who will not stop until he is dead, the only thing keeping him alive is his own resourcefulness and an eslar mercenary whose reputation as a killer might make him the worst threat of all.

When I lost all track of time reading Scott's The Five Elements, I knew it needed to be part of the Indie Fantasy Bundle. Alchemy and elemental magic, swords and secrets, determined characters who don't give up even when all seems lost—it's a wild and unrelenting adventure with high stakes and dire personal costs. – Blair MacGregor

"Aaron?" It was Shanna. "Where are you going? The water…it's rising."

She was right. He had to hurry. "Not far. I'm coming right back. Don't worry!"

He heard the tinge of fear in her words, and wished as he sloshed away that he'd more time to offer reassurances. One of the other girls—it sounded like Rachel, who had never really liked him—yelled, "I always knew you were worthless, Squeak!" Aaron ignored her. The moment he was able to pull himself from the water, he set off at a run, backtracking until a juncture led him down another passage, through an arch, and to the workshop of Marcus Gentry. It was locked, of course. Fortunately, Aaron had a key. Not a real key, but enough syrin acid stowed away in one of his vest vials to melt away the knob at its base. A quick dash of pedric neutralized the acid, and Aaron was just able to manipulate the exposed workings and undo the lock. Aaron dashed inside, finding the items he needed in no time at all. Then he was trudging back to Shanna and the others.

The first thing he heard upon returning was the sound of arguing all centered around Aaron's departure and the belief that he wasn't coming back. It sounded as if Shanna was the only one defending him. A yell from Aaron silenced them all. "Someone get a chair," he said. "A strong one."

"What good is a chair going to do?" one of the girls asked.

"We're going to lift the door."

"With a chair? You're an idiot, Squeak!" Rachel again. "You're wasting our time. Why don't you go find someone who can lift—" Sounds of a scuffle. Then Aaron heard a sharp cry of pain. "Call him that again," Aaron heard Shanna say, "and we'll leave you behind!" That was that. Shanna prompted Aaron to go on.

Aaron tossed his nearly spent torch into the water and, using both hands, handed off two thick, iron wagon axles through the opening beneath the drop-door. Each four foot in length, Marcus smoothed and polished them by the batch for the narrow, two-wheeled calashes that plied Norwynne's byways on any given day. "You're going to lift the door using the axles as levers. Slide one end underneath, then as many of you as can fit along the remaining length need to lift. Do it together. Don't waste your strength." Aaron waited for the barrage of protests and condemnations, but there was nothing but silence. He took it as an acceptance of his plan and went on. Or almost did. One look at the briny, soupy mix, tainted with dirt and dust and the death he'd seen above, and he had to take a moment to shake off a sensation of disgust and fear. "I'm going under the water. Once you lift the door I'll prop it up using the peg holes in the rails. Lift it as high as you can and hold it there until I come back up and tell you to let go. But be careful! Ease it down gently, or it might not hold at all."

"We understand, Aaron!" Shanna said. "Tell us when to start lifting!"

Aaron took a series of breaths, readying himself. "Now!" He took one last breath, then plunged beneath the surface. He kept his eyes closed against the stinging filthiness, using his hands instead to judge their progress. Right away, he received confirmation that his plan was working as Shanna and the others raised the door above one and then another of the peg holes, which ordinarily were used to hold the door in place during repairs. By touch, Aaron shoved iron wheel spokes that he'd placed into his satchel into the exposed holes. It was a tight fit, but with enough twisting he was able to force the spokes home. When the door's progress slowed, and rose no higher, Aaron inserted one last spoke, then shot back to the surface. The water had risen even higher. Aaron asked them to lower the door the moment he'd drawn enough breath to talk. It went down inches and—Aaron breathed a sigh of relief—held.

Aaron didn't have to tell them what to do next. There was some hesitation; they must have felt the same dread Aaron had before he'd submersed himself in the fetid water. But they did it, swimming through the enlarged gap to come bursting to the surface. They were all girls, something Aaron became more and more conscious of as each emerged. Every one of them thanked him. Rachel managed only a nod. They clustered together a short distance down the hall, cold, numb, and frightened.

Shanna emerged last. Aaron's heart leapt to see her, but before he could transform his elation into words Shanna locked both arms around him in a tight embrace. Then she pulled back just enough to kiss him full on the mouth. Whatever Aaron had wanted to say was lost amidst the sweet saltiness of those lips and a mind-numbing sensation that rose from every part of him at once. The kiss lasted only a moment, then Shanna pushed away to smooth wet hair from her face and to adjust her borrowed cloak that she still wore draped over her shoulders. "Thank the Old Gods you came! There was someone… then Corrin, but they couldn't—They both left us! I thought for sure we were going to… What are you staring at?"

Aaron felt the heat rise in his face. "I'm not—I mean I was—"

A rumbling from the earth put an end to Aaron's stammering. Ripples raced across the surface of the water and, beneath their feet, the floor vibrated. The tremor—an aftershock, Aaron realized—lasted only a moment, but it was enough to drive the girls into a panic. As one, they fled down the hallway. Aaron and Shanna, in no less of a hurry, followed. The group made it as far as Bronzehome Juncture—not very far at all—when the earth awoke again. The girls plunged into the water filling the juncture, managing in their mass hysteria to listen to Aaron's direction as he bid them return the way he'd come. The last of them had just managed to fight through the rush of water flowing from the passage and leave the juncture when Aaron and Shanna heard the ceiling above them cracking apart. In desperation, they plunged forward, trying to reach the other passage.

Great chunks of rock and a streaming avalanche of water fell from above, extinguishing wall lanterns and creating a chain reaction that shattered the floor beneath their feet. Aaron only just managed to grab hold of the edge of one passage's railing. Shanna somehow found his other hand. For one terrible moment, as the floor collapsed and Shanna's weight jolted his, Aaron thought both of them were going to fall. They didn't, though almost immediately Shanna's grip on his began to slip.

Panic Aaron had never thought to hear from Shanna somehow rose above the roar of falling water and debris. He tried to tighten his grip, but it seemed the more he squeezed the more Shanna's slipped free. Aaron tried to cry out to her, but his mouth filled with water and he fell into a fit of choking instead. Unbalanced, he lost what footing he'd gained. Unable to see, hardly able to breathe, Aaron focused everything on holding fast to Shanna's hand. Sheer thought was not enough, though, as their hands slipped further.

The earth groaned, beckoning Shanna into its embrace as the water streaming past them tried to pull her away from him. Aaron wanted to shout out, yelling that the earth had taken enough and that it could not have her, too. But he'd no strength left. Only their fingers touched now, and then not even that. His fingers slipped along hers, and then her hand was gone from his.

She did not hear his cry, for she was gone, taken by the water's ferocity. It did not deter Aaron from shouting, nor yelling, nor even sobbing her name until he was so drained of strength he could do nothing but hang in place while bits of rock and sheets of water continued to fall from above. Minutes—or hours—passed before Aaron lifted himself to safety. He made it only a short distance down the passage before he collapsed. He stayed there for a long time.