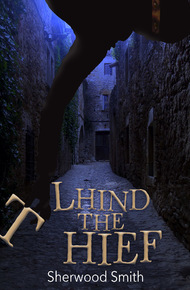 Sherwood Smith began her publishing career in 1986, writing mostly for young adults and children. To date she's published over forty books. The latest was Stranger, co-written with Rachel Manija Brown. She also writes for young adults, her most popular book being Crown Duel. She's also written short fiction, and collaborated with several authors, including the Grand Master Andre Norton. One of her books was an Anne Lindbergh Honor Book; she's twice been a finalist for the Mythopoeic Fantasy Award and once a Nebula finalist. Some of her stories have been reprinted in "best of" anthologies, and her work has been translated into numerous languages.

Lhind the Thief by Sherwood Smith

Lhind has been on the run all her life.

Stealing what she needs, using magic for disguise, she never stays anywhere long. Lhind even has secrets from herself, for she has few memories, and those are troubling.

But life is good until she gets caught by Rajanas the warrior-prince, Thianra the bard, and Hlanan the scribe. And that's when adventure begins, because someone very powerful wants them all dead.

As they evade pursuit and work to uncover their enemies, Lhind struggles with the invisible bonds of friendship and trust, while Hlanan begins uncovering her secrets one by one.

Then she finds that he has secrets, too.

This fantasy with a dash of romance takes place in the same world as A Posse of Princesses and the Wren series.

Sherwood Smith is one of the most talented and generous souls in the writing community. There are many writers, myself included, who would have lost a great deal of time stumbling and falling were it not for her kind and insightful support. Her body of fiction spans decades, with fantasy and science fiction written for children, teenagers and adults. Lhind the Thief highlights her mastery of young and capable characters shoved into dangerous adventures of political intrigue, captures and escapes, and furtive magic. – Blair MacGregor

A couple of stones thumped me in the back.

I enjoyed the angry bellows until my pursuers got close enough to hit me. The stones made me tuck my head down and run faster.

The street narrowed ahead. I scrambled around the corner of a dingy, crack-walled house, scattering poultry in a cackling wake, and found myself in a closed courtyard, high fences joining the three cottages that opened onto the court.

The closest fence stood about twelve finger-spreads high, made of thin, weather-beaten slats nailed together with warped rails. I risked a leap to the top, balancing on my toes, and from there another leap to the tiled roof of a cottage, crouching down as the first of the chasers bounded into the courtyard.

They stopped, confused to find the court empty, until those following behind ran smash into them. The hunt became a pushing, shoving crowd, everyone bellowing and nobody listening. I had to bury my mouth in the crook of my arm to smother my laughter. Then I raised my other palm and shimmered an image of myself disappearing over the fence on the opposite side of the courtyard.

"There," the blustering bully in the lemon-yellow smock howled, pointing in the direction of my shimmer. "He's crawled up the curst fence like a curst fly!"

"Around, you slow-footed slugs," someone in back yelled as Yellow Smock scowled up at the fence. Would he actually climb? I hoped he'd try, and bring the entire dilapidated rampart down.

One of the warped, iron-reinforced doors opened and a brawny woman appeared, a carving knife gripped in one of her mighty fists. "You're trespassing," she snarled. "Git!"

As quickly as they had gathered the mob scattered again.

The shouts faded away. The woman cast one last squint-eyed glare around the empty courtyard, then retreated inside and slammed the door. Whump! went the inside bolt.

I patted my stomach, where I'd stuck Yellow Smock's moneybag, the week's take from his so-called 'protection' service. That might buy me a corner to sleep in, even if it turned out the local Thieves Guild (which, I'd been warned by some young orphans who lived at the docks, was run by the harbormaster) wouldn't let me join.

Or maybe I ought to get something to eat first. I began the climb down, wobbling because my head felt light, as if it was about to roll off my shoulders and float away. Nothing but stale rain water, stolen from people's barrels, had passed my lips in nearly two days. No wonder Yellow Smock and his gaggle had almost caught me.

Breathing deeply until I felt steady again, I reached the filthy ground. And then, contemplating hot cakes with butter, I eased out into the street.

I stepped wide to avoid a foul mess in the street, then heard a scrape behind me, like boots against stone. A dark, heavy cloth flapped down over my head.