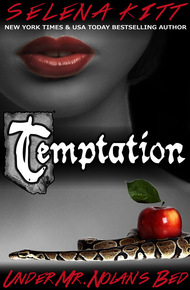 She can be reached on her website at www.selenakitt.com.

What happens when you fall in love with your best friend's father?

Leah is a good, Catholic girl, and she and Erica have been best friends since their first communion. Sure, Erica's father is handsome and charming, but Leah spends so much time at the Nolan's—just Erica and her famous, photographer father now, since Erica's mother died—that she's practically part of the family.

Both girls have led privileged, sheltered lives and are on the "good girl" track at St. Mary Magdalene's Preparatory College, Leah pursuing her love of dance and Erica sating her endless curiosity as editor of the newspaper. Neither of them could have ever imagined that one fateful discovery will not only push the boundaries of their strict, repressive upbringing, but the bonds of their friendship as well.

The innocent 1950s - a perfect backdrop for this "new adult" historical romance saga. What happens when you fall in love with your best friend's father? – Kiki Howell

She didn't bother with toe shoes or even music, although there was a record player in the corner. There was no point in waking anyone, because the music was in her head, a hot, pounding beat, moving her limbs. This was no prim, light dance of the sugarplum fairy, but the Latin heat of Don Quixote, the coquettish dance of a woman seducing a man. Leah threw herself into it, dancing the passionate pas de deux with an invisible partner, a man who usually stayed in the shadows, even in her imagination, but tonight he stepped forward in her mind for the first time.

Tonight she was dancing with Mr. Nolan, dancing for him, putting herself on display for his pleasure. It made her feel beautiful and wanted, like those women in the photographs, teasing a man with the long, sinewy stretch of her body, even if the man was still caught in her imagination. He had a face tonight, and in her mind, Mr. Nolan was transfixed, captivated by the flash of her thigh, the curve of her neck, the sheen of sweat on her skin as she twirled across the smooth, hardwood floor in her bare feet.

Without toe shoes, the dance was no less graceful but somehow more physical, her lines less clean, her landing not quite as soft. Today's revelations moved through her, dark secrets burning her skin, unlocking an expression in her body she had never understood before. She still couldn't quite wrap her head around it, but her body followed its longing, a passionate, frenzied dance of a woman with a ravenous appetite. She felt as if she could swallow the whole world.

Her memory of those photographs, those titillating pictures, and the rush of feeling it created in her, made her chest burn and her limbs sing. She danced with the memories, she danced the sin and shame of her own lust, the final acquiescence to her body's need, and the sweet triumph of reaching that peak. The dance was hers now, no longer anything she had learned. It was the pure expression of her essence, every feeling and thought that had been running through her head on some endless loop.

When she finally collapsed in a heap in the middle of the floor, breathless and panting, she felt like crying, as if her body had been filled to bursting and it must now have some sort of deliverance. The dance she had hoped would exhaust and deplete her had simply served to energize her further. Leah lifted her head, opening her eyes slowly, and saw him standing there in the shadows, like a dream.

Her heart fluttered to her throat like a trapped butterfly and her hand leapt there, as if she could catch it. He was watching her, just outside of the circle of lamplight, leaning against one of the tall supports she and Erica used to dance around that ran floor to ceiling throughout the warehouse.

She heard the click of his throat as he swallowed dryly. "You're so beautiful."

The look on his face was the one straight from her imagination, like he worshipped her, and at the same time, like the big bad wolf accosting an innocent red riding hood, like he wanted to eat her all up.

"I didn't mean to wake you." Her voice was barely a whisper. "I just… couldn't sleep…"

She was stunned to silence, lips parted with words she couldn't speak, staring at him as he took a step toward her, the light on his face now, a wolfish look in his eyes making her skin bristle all over. She had never heard Mr. Nolan swear before. Ever.

"Leah…" Her name on his lips was like a caress. His gaze moved over her, no tights, no leg warmers, no toe shoes. He'd seen her like this a hundred times of course, but she had never felt so naked. The look on his face changed when he met her wide eyes. She saw the emotions cross his features, from horror and shame to something like anger. "Jesus. Go to bed."

He turned and waved her toward Erica's room, and she went, grabbing her nightgown and bolting down the hallway. Erica was still asleep and Leah stripped down quietly, pulling her chaste, white nightgown over her head and slipping into her sleeping bag. She shut her eyes as tightly as she could, until she saw stars, and tried to forget. She tried to forget the images she'd seen that afternoon, the look on Mr. Nolan's face when she was dancing, the feelings she'd had coursing through her all night.

She tried to forget, but she couldn't.