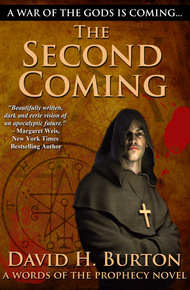 Five hundred years have passed since the Earth shifted on its axis - a catastrophic event that wiped out civilization and released magic back to Earth. Now, a dark age shrouds our world once more.

Journey into a future rife with witches, conjurers, and mythical creatures that have returned from the nether realm. Follow three intertwined fates: Paine, a young man hunted by Confederation soldiers who are on a crusade to wipe out magic; Brahm, the battle-hardened woman that slaughtered his mother, and in whose body the woman's soul now resides; and John, a friar once imprisoned for heresy, now assigned by a woman Pope to destroy the boy he unwillingly fathered. Take a voyage to the future as the legions of heaven and hell combine to bring the Words of the Prophecy to fruition.

A war of the gods is coming. And the ones we expect to deliver us from evil are not who they seem.

The Second Coming is the first book of the epic fantasy series, Words of the Prophecy.

Catherine looked at her watch. The battery had passed on to more alkaline pastures, so it read the same as it always did — quarter to eleven. Its delicate, cartoon hands were frozen in a timeless Charleston pose. It was a reminder of simpler times, of safer times.

Groaning, she pried her backside from a faded canvas lawnchair and leaned it against the wall. She fisted her hands on her ample hips.

The question was aimed at no one in particular. It might have been the cat she spoke to, but the cat was dead — three days gone.

She stared into the distance, beyond the edge of scotch pines and white cedars. Dark clouds hovered on the horizon.

“He’s not usually gone this long.”

Catherine grunted her displeasure and opened the screen door. She strode into the kitchen where she grabbed a plastic cup and dipped it into a cast-iron pot. Her lips quivered over the piss-warm liquid.

She hated it. She tired of boiling it every day. What she wanted was a tall glass of lemonade — pink, with three ice cubes. Yet Catherine knew there would never be lemonade again.

She forced herself to swallow and took her cup with her to the orange sofa bed. Her reflection stared back at her from a dust covered relic on the floor. Its black plastic casing had barely a scratch. Catherine missed television, if only for its connection to the remainder of the world. It stopped working after the Shift, two years prior.

Two years since everything went to shit.

For months she had wept, longing for everything lost to her; her parents, her friends, her brother — all gone.

Yet Ben had helped her through it. Ben was her life now. There was only her Ben.

Her gaze wandered to a tattered blue afghan crumpled in the corner.

The cat had been snatched up by vile beasts, things she had never heard of. They crouched low to the ground, yet could stand on two feet. At first she thought wolf, but they were weightier and crooked. And they possessed a cunning no animal should. Catherine had no idea of their origins. She knew only that they were unnatural — not something of this world.

At least, not the world Catherine knew.

Her Ben assured her they were gone, but Catherine wasn’t convinced. Even that morning she thought she heard their hideous cackling in the distance. She pleaded with Ben to avoid hunting in the forest, yet he refused to listen. They needed more food, he said; she ate for two now. So, dressed in his khaki pants and green plaid shirt, her Benjamin Green stepped out the door with makeshift bow in hand.

Catherine bit her lip and placed her hands over her swollen belly, a reaction she was prone to of late. He had been gone for the entire day.

In the distance, the storm churned and a harsh rumbling shook the walls.

Soon the winds will come.

She wondered how their cottage still stood, battered as it was; as if their insignificant lives weren’t worthy of the storms that swept the lands. She looked back to the television, and it sat as a sedentary reminder of what once was. The man on the newscast said the Earth had shifted on its axis, aligning itself with the magnetic poles.

She continued to stare at the lifeless screen, remembering what it had shown, as if the little black box was a window to the past. She could still see the darkened skies torched with volcanic fire, the ground splitting open to swallow cities, and land masses arising from the depths of the sea. The Shift had released some kind of darkness upon the land, and brought with it creatures that had no business walking the Earth. Dead relatives could be seen in spirit form, shadowy creatures swept past windows in the night, and spirits rose even in the light of day. Then the newscasts stopped.

For months the storms persisted, the earthquakes continued, and life in some twisted form endured. The east and west coasts were lost, a cloud of death drifted through the land, and ordinary people manifested strange abilities.

Catherine knew all about the latter.

She said nothing to Ben for fear of rejection. It happened to her, sometime after she got pregnant; she was able to do things she never could before, like when she called forth a power that scared off the wolf-like beasts. She had no idea what it was or how to summon it again, but it terrified her. Her Ben called these things sorcery, witchcraft, an abomination to God.

She rose from the sofa, passing the antique grandfather clock with its mechanical sparrow dangling over its perch. Twenty minutes before nine, it read. It still worked.

A chill sat on the air, or perhaps it was just a cold notion coursing through her veins. Either way, the result was the same, and Catherine waddled over to the wood-burning stove. Her toes were cold.

She ripped pages from an old science textbook, grabbed a small log, and shoved them in. Ben always tended the fire. Never let it go out, he said. The flames ravaged the paper, and the fire flared to life once more. She remained for a moment, warming her feet and hands, before shuffling back out the door. The storm no longer ambled in the distance, but loomed on the edge of the trees. The wind tousled her scarlet hair, and Catherine watched as destiny floated towards her with dark clouds clenched in its fists. At the edge of the woods, the great pines bowed to the wind’s might.

There was no reply.

She held on to her ragged yellow dress as she peered over the railing, and pellets of frigid rain pricked her skin. On the borders of the forest, mounds of creeping phlox littered the ground with their trails of blue flowers. They spread out endlessly, never dying off. Winter was no more in this part of the world; a place where snow once offered a light dusting at Christmas — rare, but beautiful nonetheless.

The Shift had seen to that.

The wind sighed through the leaning trees, and her nostrils caught the scent of musk. Movement skirted the shadows, and hope surged within her.

Catherine stared into the woods, and as lightning speared the sky something caught her attention. She wobbled down the wooden staircase. Her pale hands gripped the railing. The steps groaned under her weight.

Lightning pulsed again across the heavens, illuminating the copse of swaying trees once more. “No,” she breathed.

Her heart pounded in her chest, and one of her tattered shoes fell off as she raced to the edge of the woods.

She stooped to the ground.

Lying among the delicate blue flowers was an arm, severed at the shoulder. The hand still clutched a makeshift arrow. She might have fooled herself were it not for the green plaid sleeve.

“My Ben,” she sobbed, caressing the hand.

The child inside her stirred and thunder pounded in her chest.

She called upon anything that would help her.