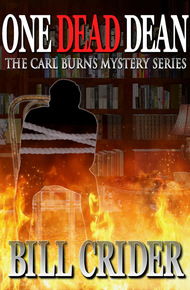 Bill Crider was born in Mexia, Texas, and has lived in Texas all his life. He is the author of more than fifty published novels and numerous short stories. He won the Anthony Award for best first mystery novel in 1987 for Too Late to Die and was nominated for the Shamus Award for best first private-eye novel for Dead on the Island. He won the Golden Duck award for "best juvenile science fiction novel" for Mike Gonzo and the UFO Terror. He and his wife, Judy, won the best short story Anthony in 2002 for their story "Chocolate Moose." His story "Cranked" from Damn Near Dead (Busted Flush Press) was nominated for the Edgar award for best short story. Bill's latest novel is Half in Love with Artful Death from St. Martin's Press.

One Dead Dean by Bill Crider

Hartley Gorman College, in Pecan City, Texas, is hardly a bastion of serious scholarship. The little Baptist school is more interested in shielding its students from the evil influence of The World, The Flesh, and The Devil than in turning out future Nobelists. But its staff, by and large, is worthy of a more demanding institution; they are victims of a glutted market in Ph.D.s and they do the best they can. So it is they who are most upset at Dean Elmore's "secret plan" to award credit hours for "undirected study" by "independent scholars"—in plain words, to turn the school into a diploma mill.

Which may be why Dean Elmore, shortly after unveiling his plan, is found bludgeoned to death at his desk. It is certainly why, at his funeral, there is not a wet eye in the house.

Or so observes Carl Burns, Hartley Gorman professor of English literature, through whose eyes we see both the crime and the larger picture of this wacky denominational Texas school.

I've edited several of Bill's books now and I think the thing that I love most about his work is that he gets to the action right from the start. One Dead Dean is a great read. The story never lags, the characters are people you've met, and it provides more than a few "Hmmm…" moments. – Patricia Lee Macomber

One hot August night in 1897 Hartley Gorman got saved in the Pearly Gates Baptist Church. Within thirty minutes of the time he walked the aisle for Jesus, the preacher had him totally immersed in the murky waters of Orchard Creek. On the banks, watching avidly an event that most of them thought they'd never see, was most of the population of Pecan City, Texas, having piled into wagons, buckboards, surreys, gigs, and one-horse shays to get there in time.

When Hartley Gorman walked out on the bank, muck sucking at his church-going shoes, water dripping from his sodden pants legs and running in streams out of his hair and down his face, he was vouchsafed a vision. He fell to his knees, threw up his arms, and pitched face forward on the creek bank. He was speaking aloud, but no one could understand the words, Gorman's mouth being mostly full of muddy grass at the time. Nobody dared to turn him over while he was in the gri of the Holy Spirit.

He told everybody who would listen later that he'd seen the Lord (though he was always a little vague on what He looked like), who had commanded him to build a school, a college where ladies and gentlemen could go to learn without being tainted by the evil influences of the World, the Flesh, and the Devil, three things that most people in Pecan City thought Hartley Gorman knew plenty about himself. Not that he ever had anything to do with them again.

In fact, Hartley Gorman became a saintly man, dedicated to his dream, which, thanks to the fact that Hartley was by far the richest man in Pecan City, soon had become a reality. By late the following fall, a little over a year after his vision, Hartley Gorman College's first building was standing in all its glory, three stories high, with a veneer of native sandstone and a tall steeple on top. Twenty-two students had enrolled.

Twenty years later when Gorman died, the school, not having grown very much, was taken over by his denomination. Eventually, new buildings were added and more students came, but the school remained small and isolated, known mostly for its occasional powerhouse basketball teams. Nothing remarkable ever happened there, no Rhodes scholars got sent to Britain, no astronauts were graduated. Hartley Gorman College remained a quiet, undistinguished school, safe from its founders three bugaboos, or relatively safe at least – a place that few, if any, outside the state had ever heard of. It stayed that way for a long, long time . . . .