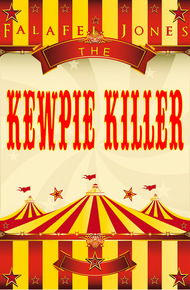 Falafel Jones was named for a Mediterranean sandwich Mom craved while pregnant. While this name may have been a burden growing up, it provided a distinction from all of the other Joneses in town. In fact, things could have been worse. Ask Falafel's brother, a construction worker named Sweet Pickles.

The Kewpie Killer by Falafel Jones

It's hard to be a tough investigative reporter when Mommy owns the paper, you lose your apartment and you have to move back home. There's also no solace in your social life when you own at least one bridesmaid dress for every friend you have. Just ask rookie reporter, Raquel Flanagan.

The night Raquel covers a carnival opening, a Bearded Lady of questionable gender finds a dead farmer planted next to a Kewpie doll. Both the farmer and the doll sport straw hats and overalls. Anxious to prove herself to Mom, who is a pathological perfectionist, Raquel locates reports of additional victims dead next to dolls that match their occupations.

At first, no one believes Raquel's theory that a serial Kewpie Killer exists. Then, Raquel meets and falls for Eddie Franklin, a cop working Kewpie Killings in Florida. Eddie can't leave his job and Raquel's mom wants her to run the paper in New York. Raquel doesn't know what to do. She still hasn't found a place to live and now someone's sending her Kewpie reporters with tape over the eyes and mouths.

Falafel offers quirky characters and out of the ordinary plots. I can honestly say I never figured out who done it until the end. The Kewpie Killer is no exception. Who else but Falafel could take an innocent little doll and imbue it with such menace? – Patricia Lee Macomber

Chapter One – When a body finds a body

Another broken Kewpie Doll marked another carnival killing. Fresh from college, I covered the show's opening for the local paper, when Brenda, the Bearded Lady found the dead body.

She ran at me, grabbed, screamed, and just about knocked me over as I looked up from my camera. A slim umm, girl with a strong grip, we swayed a moment and my tripod teetered.

"He's dead," she shrieked. "He's dead. He's dead. Deaaaadddd." She let me go and her hands shook in front of her chest. Her breasts were too large for such a slim woman.

Her left hand fluttered to her neck. "Calm down," I gripped her arms to hold her still. "Who's dead?" We stood close and she looked like she had an Adam's apple.

"This man. I went to… hook up with one of the local boys in the woods, on my break and instead tripped on the dead guy... " she shuddered, "almost fell on him. Eewww," then shivered.

Brenda pointed into the dark in the direction of an empty field beyond the carnival. "There, near the bottom of that second hill."

By now, a small crowd gathered in response to her screams and a few men started to walk to where she pointed. A muscular man in his mid-fifties drove up in a golf cart and ran to the Bearded Lady. "Brenda," he said and put his arms around her, "you all right?"

After she sobbed, nodded and repeated her story, the man said, "Shit" and pulled out a cell phone. "Got to call the cops." Then he yelled out to one of the approaching men, "Hey, Leonardo, do something with this crowd," and walked off to make his call.

Leonardo, a good-looking guy in his early twenties, whistled shrilly through his teeth. Then he raised his hands causing the loose sleeves on what looked like a puffy, white, pirate shirt to reveal muscular forearms and scarred wrists. He yelled, "Folks, there's nothing to see here. Please leave the area."

Only one or two folks moved. Then Leonardo added, "For the next hour, the Midway entrance fee is waived. It's on us."

More started to leave. "…and free cotton candy for the next 20 customers."

Most of the remaining crowd broke up, and the carnival staff dispersed the rest. Only a few other folks stood around and waited to see what else might happen. Leonardo turned to me offered his hand and said, "Leonardo. Who are you?"

"Raquel Flanagan, with the Chronicle, covering your opening. I was taking some photos when, er, Brenda came running over." Leonardo had a beautiful smile with teeth like an actor's... nice eyes too… and about my age. We shook hands and it felt too nice holding his to let go but the man with the cell phone joined us. Leonardo released me and asked him, "Pops, what'd they say?"

"They're coming. Don't touch anything. You know. Geez, kid, did you have to give away the store? We're on a shoestring to begin with… going to go broke here. This death is going to kill me."

Leonardo clapped him on the back, and then smiled. Boy, that kid had lips. "C'mon, Pops. Don't worry. We'll make out ok. We always do."

When Pops rolled his eyes and walked away, Leonardo turned to me, "So, Raquel, what did you see?"

"Nothing. I just finished shooting my wide shot of the Midway lighting, again, when Brenda bumped my tripod."

"Yeah, about an hour ago, some guy in a white shirt ran in front of the camera, so, I came back after the crowd thinned out."

"You could tell it was a man that ruined your first shot?"

"You made both shots from here?"

"From your tripod position, aimed towards the field, you might have caught something could help the cops."

The sound of sirens grew and soon headlights lit people and booths as emergency vehicles pulled onto the grass where the carnival set up. Police parked their cruisers at odd angles with colored lights flashing and when the doors opened, officers piled out. With the carnival music playing, they reminded me of the circus cars, which always hold more clowns than they should. Two of the officers went off with Brenda, Leonardo and Pops.

Breaking news doesn't usually break when a reporter's there to witness it so I called my editor at home, filled him in and begged for the story. He said, "Hmmm… don't know Raquel, you're still kind of new at this."

"Nonsense, I've been at this since birth. The only difference now is the paycheck."

"Well, it's not to say you can't handle it. You can. It's that there are other reporters… can't show favoritism… got to be fair with assignments."

"OK, Uncle Bill. Tell me this. You have anybody else who can get here fast?"