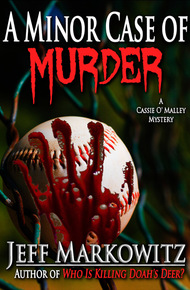 Jeff Markowitz is the author of the darkly comic mystery/thriller, Death and White Diamonds, as well as three books in the Cassie O'Malley mystery series. He loves to write early in the morning. "You can usually find me at my computer at 5:30 in the morning plotting someone's murder." When he's not out looking for dead bodies, Jeff keeps busy as the founder and Executive Director of a nonprofit agency serving adults with autism. Jeff is a proud member of the International Thriller Writers and Mystery Writers of America.

A Minor Case of Murder by Jeff Markowitz

When minor league baseball comes to White Sands Beach, not everyone welcomes the club. Birders are especially upset by the location of Sand Skeeter Ballpark, but will they resort to murder to protect the birds' nesting areas? When a woman dies at the ballpark, during the final game of the season, tabloid reporter and amateur sleuth Cassie O'Malley finds herself on the case. Tag along as Cassie and her unusual band of cohorts attempt to untangle the clues in A Minor Case of Murder.

There's nothing I love more than a writer who knows how to inject a little humor into their writing. Jeff Markowitz is one of those writers. A Minor Case of Murder combines tension, humor and the most unlikely group of characters you'll ever meet. I love it. – Patricia Lee Macomber

It was a raw September afternoon on Godiva Beach, lonely and deserted, the wind whipping in off the water stinging Cassie's face, good weather, she told herself, for burying a friend. The church service in the morning had been small, twenty family and friends sharing their grief, saying goodbye, perhaps half that number continuing on to the cemetery to pay their last respects to the late Harrison T. Dicke. Cassie hadn't seen the octogenarian naturist and amateur historian of White Sands Beach in quite some months, but that didn't lessen her loss. Standing at the water's edge, Cassie wanted to laugh, but needed to cry. She told herself it was only the ocean spray moist on her face. Cassie was unprepared for the tap on her shoulder. Jumping at the stranger's touch, she nearly landed in the cold September surf.

"I'm sorry. I didn't mean to startle you." Cassie examined the stranger closely. He was a good-looking gentleman in his thirties, handsome in a way no longer fashionable, not health-club handsome, not rock star handsome, but Eisenhower-era handsome, Pillsbury doughboy handsome, his hair cut by a barber rather than a stylist, his suit purchased at a discount warehouse.

"You were at Harrison's funeral this morning." Cassie was unsure whether the stranger was asking or telling. "I'm Andy MacTavish, Harrison's great grand-nephew… I think." Cassie realized she was looking at Harrison as he must have looked some fifty years ago.

"I thought you might be." Andy noticed that Cassie was shivering in the chill September air. "You must be freezing out here. Please, take my coat."

Cassie, in her slate gray funeral dress, was ill-prepared for the offshore wind. "Thank you. I'd like that."

"Would you like a hot cocoa?" Andy wondered. "I know a real nice spot in town."

Cassie thought she knew every restaurant in White Sands Beach, but Andy bypassed the trendy eateries along the water, instead going inland to "Cubby's", a luncheonette untouched by time and tide, down to the wall-mounted juke box at every table, and the music, The Big Bopper, The Chordettes, Patti Page, Bobby Darrin, The Everly Brothers, the "A" side hits mostly familiar, the "B" side tunes unrecognizable. Sitting at a small booth in the back, sipping hot cocoa with mini-marshmallows, listening to the Dell-Vikings – "Come Go with Me" - Cassie and Andy made small talk, picking their way carefully through the minefield of first impressions.

"I met your uncle when I was researching a story. I had no idea what to expect, no one warned me I was meeting an eighty year old nudist, but, he truly was a charming gentleman. You know, there's a lot of Harrison in you."

"Thank you… I guess." And Andy blushed, imagining Cassie imagining him naked under a blue beach umbrella. "Just so you know… I don't share Harrison's… I mean… what I guess I'm trying to say is, I'm not a clothing optional kind of guy."

It was Cassie's turn to blush. "I'm sorry… no… when I said you resemble Harrison, I mean… I didn't mean… well, you know what I mean."

Andy decided it was time to change the subject. "Harrison showed me some of your stories. He loved your stories, the more outlandish the better."

Andy busied himself with his mini-marshmallows, as though, somehow the hot cocoa might reveal the polite response. "I think you are a very talented writer."

"But," Andy continued, "don't you think that the magazine you write for is just a little bit trashy?"

Cassie laughed. "I think the magazine is incredibly trashy. But that's its charm."

"I see." Actually, he didn't. Andy hit E2 on the jukebox and lapsed into silence. He sipped his cocoa, and, looking over the rim of his mug, allowed himself to consider the woman across the table. Andy reminded himself that a woman in her thirties, in our youth-oriented culture, is supposedly past her prime, but if she were, Andy decided, past her prime, Cassie was more impressive than most people's prime. She was of an age when women believed they were supposed to cut their hair, but Andy noted with satisfaction that Cassie looked great with her dirty blond hair falling halfway down her back.

Cassie's taste in music ran toward the giants of jazz – Charlie Parker, Miles Davis, Dizzy Gillespie – and her taste in men, well, it had been so long, Cassie told herself, she could hardly remember, but sitting in the booth at "Cubby's" sipping hot cocoa with Andy MacTavish, listening to Dion and the Belmonts on the jukebox, she began to consider the possibilities. And when Andy asked if it would be okay to call her, Cassie said yes, and, for a change, she meant yes.

After her lunch with Andy MacTavish, Cassie decided to spend the chilly afternoon on the boardwalk. The boardwalk, like the town itself, was an extraordinary mixture of Victorian charm and carnival schlock, tea rooms abutting tattoo parlors, ateliers tucked in alongside arcades. Cassie noticed a brand new storefront – Om Depot – a neon eyeball in the window – Madame Alexina, Spiritualist – and she decided to go in. Her editor had been pressing her for a new story idea, so she wouldn't be going in for any personal reason, she told herself, certainly not to learn about Andy MacTavish.

"That's all right. I can come back later."

Madame Alexina fixed her gaze on Cassie, her eyes like hazel tractor beams locked on Cassie's soul. "Ah, you met a man today."

Cassie took a seat and waited, while Madame Alexina searched for her crystal ball among the partially unpacked paranormal paraphernalia. Madame Alexina dumped the remaining boxes on the floor, revealing a veritable landfill of the sacred and the profane.

A worry stone. The I Ching. Hippie dog tags ("War is not healthy for children and other living things"). The Tibetan Book of the Dead. An iron cross. A rabbit's foot. Tickets from a Bruce Springsteen concert in Indianapolis. A Life Magazine photograph of John F. Kennedy. A Mad magazine drawing of George W. Bush. The sayings of Chairman Mao. The prophecies of Nostradamus. The wit and wisdom of Baba Booey. Zigzag rolling papers. Trail mix. Trojans. (Trojans?). Double-stuffed Oreo cookies. A Frisbee. A boomerang. Her unfinished collection of Zen limericks ("There was a Bodhisattva Kannon/Who was known for the men that she'd blown/With her eleven heads perched in ten different beds/She still had a mouth left to moan"). Two parking tickets. Three plantains. Four dried ancho peppers. Five golden rings. A balsa wood airplane. The New Testament. Support hose. An Ozzie Osbourne bobble-head doll. Her favorite fortune cookie ("Please disregards all previous fortune"). A gold tooth. A silver dollar. Her bronzed baby shoes. A stuffed rat. A rubber spider. Plastic vomit. The Lord of the Rings DVD. A black light. A blues harmonica. An autographed copy of Steal this Book. A ceramic cow. Chinese handcuffs. A Swiss army knife. A French tickler. A Belgian waffle. A Led Zeppelin CD. Diet pills. Depilatory. A can of Sterno. A box of Red Zinger. A Louisville slugger.

But no crystal ball.

"Damn, I was sure I had it in there. Wait, I've got an idea." And Madame Alexina bounded over to the closet, returning with her bowling bag. "I'll improvise."

Cassie imagined her editor's reaction when she turned in the story of the psychic kegler (or was it the kegling psychic?).

Madame Alexina began by gently caressing the ball, alternately stroking and tickling it, the foreplay to fortune telling. She explained to Cassie, "I've got to awaken her desires before the bowling ball will surrender its ebony defenses."

As Cassie watched, the bowling ball did seem to be losing some of its blackness. More precisely, it seemed to Cassie as if the ball were composed of a translucent shell containing an inky interior. Madame Alexina began to tease the bowling ball, tracing little circles around the finger holes. The shell was becoming steadily more translucent, the interior less dark, more liquid. Hesitantly, Madame Alexina slid her finger tips ever so slightly into the holes and, emboldened by the lack of resistance, began to probe ever more deeply and vigorously.

Sitting there, Cassie felt like a peeping Tom. She was fascinated, aroused, embarrassed and silently writing the first paragraph even as she watched. ("Woman has sex with bowling bowl. And sees the future!").

As Madame Alexina's pace quickened and her fingers grew more confident, the inky depths grew ever weaker, until, in a moment, the bowling ball surrendered itself – transparent, exposed, vulnerable. She stared intently into the depths of the crystal clear bowling ball, all the while rocking and quietly chanting. "Now we can begin," she announced, her words muffled in the eerie silence of the now fetid storefront…

Cassie was not ready to admit that – not to Madame Alexina, not to herself. "Let's just say, I'm curious."

Cassie spent the next half-hour chatting with Madame Alexina about love and death, about Andy MacTavish, but also about her late husband Rob, gone nearly fifteen years, and Harrison T. Dicke, interred just that morning.

At the mention of the morning's funeral, Madame Alexina again consulted her bowling ball. She chose not to tell her first customer that she saw many more funerals in Cassie's future.