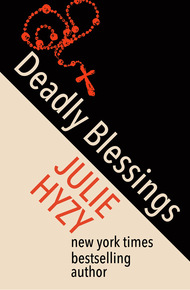 After having lost a promising lead on information about her real parents and facing the fallout of a failed relationship, Chicago news researcher Alex St. James is primed to dive into her next investigation interviewing Milla Voight, a Polish immigrant pregnant by a Catholic priest. But when the young woman is found murdered, Alex's boss plays office politics and rips her off the case.

Risking not only her job, but her life, Alex investigates, making enemies of powerful people in the Chicago Archdiocese. Unless she backs away from the story, the next thing Alex may hear are her own Last Rites.

Deadly Blessings is a good old-fashioned page turner. It offers a lot of tension and a set of characters that are clearly drawn and multi-dimensional. This one is longer than most and gives a good read, though it doesn't give up much else until the end. Julie Hyzy puts a lot of thought into her books and it truly shows. – Patricia Lee Macomber

The problem was, I couldn't leave.

My cell phone chirped, shattering the awkward, magazine-reading silence of the crowded waiting room. In the quick moment it took me to haul my purse from the floor to my lap, the phone chirped again, and the two strangers flanking me shook their heads in annoyance.

As the phone continued its high-pitched signal, I scrambled out of my seat, dug for the handset, and headed toward the wall-mounted display of blank adoption file requests in the far corner. The space afforded me a modicum of privacy as I checked Caller ID, then answered.

Back in Chicago, my assistant talked fast. I could tell by the hollow sound of her voice that she kept a hand cupped over the mouthpiece. "Bass is furious. He wants to know where you are."

Bass was always furious about something, but the tension in Jordan's voice—practically pinging over the connection—had me worried.

"Don't know. He isn't saying much except for bugging me to find out where you are."

"What did you tell him?"

I could almost see her dark face grimace. "I sure as hell didn't let on you were in Springfield, if that's what you're asking," she said. I could always count on Jordan for sass. A beat later, her conspiratorial tone returned. "What do you want me to say?"

My mind raced. "Tell him I have a doctor's appointment. I'll be in as soon as I can."

"Tell him it's female troubles. That'll make him squirm."

She let out a short laugh, then sobered. "You best get back here as soon as you can. I think it's something to do with that priest story of yours."

"Oh, shit," I said, hoping no one nearby heard me, cupping my own hand over the phone now, too. "Did Milla change her mind about talking to us on camera?"

"Bass hasn't told me squat about what's going on. All I know is, he's been on the phone all morning, screaming at people. He's flipping out, let me tell you. And he says you better get back here, pronto. Otherwise…"

A stern voice from behind the far desk called out my name. "Alexandrine St. James?"

"I gotta go, Jordan," I said. "They just called me." I waved to the woman, who acknowledged me with an absent-minded nod. Making my way toward her, I spoke into the phone again. "I'll call you when I'm done here. Hold him off as long as you can."

"You got it, Alex, but he said if you aren't back by lunch time, your ass is grass."