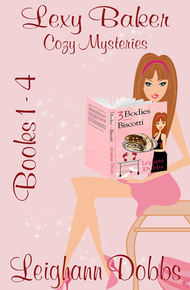 USA Today Best Selling Author, Leighann Dobbs, has had a passion for reading since she was old enough to hold a book, but she didn't put pen to paper until much later in life. After a twenty year career as a software engineer with a few side trips into selling antiques and making jewelry, she realized you can't make a living reading books, so she tried her hand at writing them and discovered she had a passion for that too! She lives in New Hampshire with her husband Bruce, their trusty Chihuahua mix Mojo and beautiful rescue cat, Kitty.

In Killer Cupcakes, Lexy finds herself in the middle of a murder investigation headed up by her hunky neighbor detective Jack Perillo who figures her for the killer.

In Dying For Danish, Lexy stumbles over the body of her high paying catering client and finds herself in a race against time to find the killer.

Next, in Murder, Money and Marzipan, Lexy is off to Las Vegas to compete in the prestigious Bakery Battles where, you guess it, she stumbles over another body. But not just any body. Contest judge Amanda Scott Saunders has been strangled with Lexy's apron. The local police soon discover Lexy had means, motive and opportunity and Lexy must enlist the aid of her grandmother to help clear her name.

In Three Bodies and a Biscotti, murder hits too close to home when people at Lexy's grandmother's retirement center start dropping like flies. Lexy's detective boyfriend, Jack, refuses to believe that foul play is involved, leaving her no choice but to find the killer on her own. Along with Nans and her gang of iPad-toting, mystery-solving grandmas, they use everything from hypnosis to high-tech gadgets to track down the killer.

I'll admit my shame now. I bought Leighann's first Lexy book because of the cover. The covers are cute. The titles are totally adorable. And when I started to read…I was hooked. Leighann's characters make me laugh sometimes and scratch my head occasionally. Lexy Baker is my new guilty pleasure. – Patricia Lee Macomber

Lexy's stomach fluttered as she approached the massive oak door. Balancing a huge glass tray loaded with artfully stacked towers of lemon, cheese and strawberry Danish pastries in one hand, she teetered up the steps on the spikes of her Jimmy Choo stilettos.

She still felt a bit intimidated by the large house even though she had been there twice before. The elegant Victorian, owned by the absurdly wealthy Toliver family for the entire one hundred and fifty years of its existence, had bragging rights of being the biggest house in their little town.

She shifted the weight of the tray onto her shoulder, careful not to tip it. The Danish were part of the setup for a morning brunch—a fancy affair to celebrate the upcoming wedding of aging family patriarch Xavier Toliver. The catering job could give a big boost to her little bakery business and she wanted everything to go perfectly.

Lexy took a deep breath. She grabbed the cold brass doorknocker, rapping it against the plate to announce her arrival. Instead of the expected sound of footsteps coming to the door, she heard the squeak of hinges. The door swung open on its own, beckoning her inside.

"Hello?" she ventured. Maybe they're all busy getting ready and left it open so I could let myself in.

Lexy pushed the door wider taking a tentative step into the marble foyer.

"Hello...it's me, Lexy Baker from the Cup and Cake." No answer. Lexy shrugged. Better get to work. She shifted the tray so the palm of her hand would steady it and bear most of the weight. Proceeding forward she made her way through the foyer to the great hall which led to the kitchen. Hollow clacking sounds from her heels on the cold tile bounced off the oak paneled walls.

The hallway opened up into the expansive kitchen. Even though the house was old, the kitchen was modernized - a showcase of gleaming granite and oak.

"Is anyone here? I have the pastries."

Lexy entered the kitchen. Looking for the best place to set the Danish, her eyes scanned the room, then settled on a pair of long tables covered in white cloths which had been placed by the palladium windows.

She skirted around the massive kitchen island, heading toward the tables. Something sticking out from behind the breakfast bar caught her eye. Were those feet?

She took a few steps over to get a closer look. They were feet—well dressed feet wearing the latest Steve Madden pumps laying at an impossible angle on the floor.

Lexy knew something was very wrong. She wanted to run, but her body seemed to have other ideas and it stepped closer to the feet. Against her will, her head craned around the corner.

Lexy felt sharp pinches on her ankles and saw Danish pastries bouncing off the floor. She heard a loud, high scream that wouldn't stop. It took her a few minutes to realize the scream was coming from her.