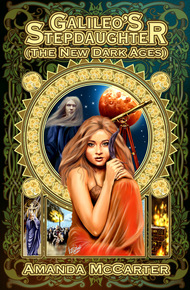 Amanda grew up reading the works of Mercedes Lackey, Anne McCaffrey, Frank Herbert and dozens of other fantasy and science fiction writers. As time went on, it occurred to her to write her own fantastic stories of faraway places and distant lands.

Encouraged by her mother and her family to write, a one time hobby became an obsession and a passion. An obsession she hopes to one day make full time.

Currently, Amanda lives in Tulsa, OK with her boyfriend, a snake, two cats, and two dogs. When not dreaming of faraway places and distant lands, she spends her time knitting, reading, and playing video games.

Albert Einstein is quoted as saying, "I know not with what weapons World War III will be fought, but World War IV will be fought with sticks and stones." For Ellia McAllister, it couldn't be more accurate.

Thousands of years after a devastating cataclysm, humanity lives in a new dark age. Technology and science are forbidden and a matriarchal church rules society. However, Ellia is ruled only by her curiosity. Defying the Church, she learns that all is not as it seems in the holy books and that humans once traveled to the stars and possibly beyond.

Her knowledge and defiance will mean her death and the death of her family unless she escapes. When she meets the mysterious Kieva, a nomadic Rover, she soon learns that more is going on in the Church than she ever thought possible. Without his help, her life, the lives of thousands of others, and mankind's future are at risk. Can she set her own beliefs aside, her way of life, and trust a stranger? Even if trusting him might mean her death?

Ellia went off on her own, deep into the woods outside the village. Not many people went out there save for hunting, but no one went near the ruins. Many of the villagers believed they were haunted, or cursed, or both. She never believed in ghosts or curses. Something else her mother blamed her father for; an overwhelming skepticism and a distinct lack of faith in the supernatural. The thought made her smile.

She climbed up a pile of rubble to the domed building at the top of the hill. She figured the rubble had washed down from the other ruins. It looked like there had once been several other buildings in the vicinity. Their foundations were still there, but the rest of the buildings had been destroyed. All but the domed building with its star viewer.

Ellia saw it as a sign. Not since the Library of Brea had she found a place that had given her so much joy. Her father had died under mysterious circumstances when she was twelve. Her mother had given her the news, cold an unconcerned. She ran until she couldn't breathe anymore. Tears blurred her vision. She didn't know where she was. When she could no longer run, she walked. Ellia had no desire to go home that night. Her mother didn't care that her father was dead. In fact, Ellia believed her mother was happy about it. So, she kept going until she was exhausted and fell asleep in the forest.

When she awoke, it was dark. She didn't know how long she had been there, but she found the ruins shortly thereafter. From then on, it was her place, her sanctuary. At first, it was just a place to hide from her mother, from the villagers, from responsibility. But as time went on, she began to learn its purpose. She began to clean and repair it. She discovered the star viewer and the beauty of the night sky.

Staring into the vastness of night, Ellia could forget her father's death for a time, forget about all the missed opportunities and the travels she would never again have. The stars filled her mind. She wondered how they got there, what they were, why some shone more brightly than others. With time, she'd find her answers. Her constant search for more knowledge made her life bearable. Now she was about to leave her pain behind. It both thrilled her and set her teeth on edge. She had never gone out on her own. But then, she wouldn't be alone.

It seemed fitting she should return to this place one more time before she began her journeys again. And she couldn't leave her notes. She would have to bundle them up and disguise them. If they were discovered while they were gone, it would raise too many questions. It might even put Steven and her mother in jeopardy. Despite their own personal machinations, she did care about them both. And of course, she and Joseph would be in danger as well. With their plans made, the whole village would know where they were going.

And if Norene McAllister had to give up her position and lose placing for her precious son, Ellia would spend the rest of her life running from her mother's agents, if the church didn't get her first. Her mother did not take failure lightly. Ellia imagined her mother would take a family betrayal very personally.

The last of the dead winter leaves had blown into the ruins. Without much of a roof, there was very little protection or shelter from the elements and Ellia couldn't risk adding too much to the building. On the odd chance someone actually came out this far, a stretch of leather over the roof would raise questions. Though, she supposed, it could be blamed on squatters and Rovers. Not that this area was rife with thieves and the homeless.

Ellia dug into the hidden compartment beneath the star viewer. She rolled her notes up and tied them with a piece of rawhide. She wouldn't be able to take all of the books there so she would have to select just a handful, probably the most damning. She started to sort out which books she wanted when her alarm system made her stop.