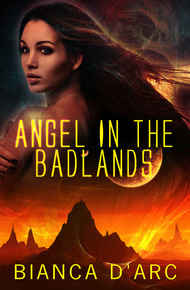 Bianca D'Arc started her professional life running a laboratory. After grad school, she started to climb the corporate ladder in the shark-infested streets of lower Manhattan. Along the way, she studied various forms of the martial arts, racked up hundreds of thousands of frequent flyer miles, and learned that life is too short to spend it doing something you dislike. She now writes full time and loves it more than anything, though she'll always miss her first love... her laboratory.

Angel in the Badlands by Bianca D'Arc

Is she an apparition or is she real?

Crash landing on an uncharted planet, Ezekiel Amber sets out across a desert, looking for help. What he finds is salvation in the form of a woman. Angela discovers the unconscious man and takes him below ground, where the heat of the desert does not reach.

Angela's small community must be protected from humanity's alien enemies. Likewise, Zeke must protect his angel, the one woman he wants like no other in the universe. It's a race to see who will get there first – Zeke's reinforcements or the aliens – and the fate of the human race could hang in the balance.

Zeke looked about the crash site and grimaced. His ship was in bad shape. It wouldn't be flying again anytime soon without major repairs. But at least the pirates hadn't gotten him. They were probably still looking for his trail, though, so he had to get moving.

Unfortunately, the uncharted dustball he had landed on was not what anyone would call hospitable. And he was hurt. His leg was bleeding and he had whacked his head on the console when he'd crashed. The world—such as it was—was blurry and too damn hot as he climbed out of his crippled ship and began walking.

The dark, sandy ground beckoned, but he couldn't drop yet. He had to find shelter before the second sun rose any higher, or he would burn to a cinder on this godforsaken rock.

Zeke had more than his fair share of stamina. It was a gift of his altered genetics. Designed and raised in a special program headed by the famous Dr. Amber Waithe and her team of geneticists, he knew he had a mission in life: to spread his seed far and wide, bringing his fertile offerings to any woman who wanted to have a child. By the Maker, he enjoyed his job.

But even his enormous strength was taxed by the huge binary stars that were just a little too close to this dry, arid planet. He was a risk-taker by nature—what they termed a Wildcard in the program. The propensity to play the odds had been designed into his genes. Usually, his superior brain was able to calculate the odds of success and play his hand accordingly. This time though, the pirates had whittled down his available options.

Crashing here wasn't the best move he could've made, but it was the most unexpected. It would buy him some time at least, to evaluate his options. Given the opportunity to change the odds, he always took his best chance.

This time, however, he might just die before he could turn the tables. The suns were rising all too quickly, and he was caught out in the open with a sore head and a bum leg. He took one last, long, weary look at that second, damning sun and kept on trekking. He had to find shelter soon.

Minutes, or maybe hours later, he felt himself fading under the onslaught of oppressive heat and strong solar radiation. He saw the dusty ground rush up at him as if from a distance, then he knew no more.

Zeke woke hours later, feeling a pleasant coolness on his face. He had to be hallucinating, but he didn't feel the merciless suns pounding down on him anymore. No, instead he felt the welcome chill of rock, and the faint scent of dirt and dampness in his nostrils, as if he were in a cavern. Cautiously, he cracked one eyelid open just enough to see.

There was a woman at his side, mopping his brow with a damp cloth and the cruel suns were blessedly absent. He had to be somewhere underground. He had no idea how long he'd been out or who had saved him. Somehow, they had transported him to his present location—wherever that was. He searched his memory, but didn't remember anything after passing out in the heat of the twin suns.

The high, treble voice came from somewhere off to his left as the wet cloth abruptly lifted away from his brow. He wanted that gentle touch back. Badly.

"Are you well, brother traveler?"

The soft, melodic voice caressed his senses. He opened his eyes to behold the most beautiful woman he had ever seen. His savior was an angel, he was sure, her face heart-shaped and lovely, even devoid of the usual cosmetic alterations women of the upper classes habitually made to their appearance. No, her face was pure and natural, one hundred percent human female. She was soft, slightly rounded, and perfect.

Her delicate eyebrows drew together in concern as she studied him. Her hand touched his face once more with the cool cloth and it was bliss.

"Are you well, brother?" She repeated her question.

"Just keep doing that." His voice was a hoarse rumble in his chest. "Your touch is comforting."

He looked up in time to see the compassion in her expression as well as the slight blush on her cheeks, but she continued stroking his brow with the wet cloth. A smile curved her lips.

He felt terrible. Every muscle ached and an unaccustomed weakness gripped him. He had never felt so feeble before in his life.

"What happened?" he asked, needing more data to assess his present situation.

"Ship crashed." His strength was waning and he damned the weakness that stole over him. His eyes drooped with weariness.

"You came from the stars?" He heard the hesitation in her voice, and his eyes reopened. He read fear in her gaze, and he didn't like it. "Are you human?" She whispered the question as if dreading his answer. She seemed to steel herself as he opened his mouth to reply.

Usually all he had to do was mention his affiliation with the illustrious geneticist, Dr. Amber Waithe, and group of men known as the Sons of Amber, and all doors were opened to him. But this woman didn't seem to grasp what he was talking about.

Since the jit'suku virus, human males were rare in the galaxy. Breeder males even more so. Billions of men across the galaxy had been infected, and died. The few that survived had been left sterile. Many of the women too, had become infertile due to contact with the virus and its many mutations.

Such was the design of the jit'suku weapon. Its sole purpose was to destroy humanity by killing the men outright, and making it nearly impossible for the women to reproduce. From all accounts, the jits had strict rules when it came to warfare, and one of them was that they didn't kill women. Dr. Amber had voiced her glee over that little quirk because if not for that rule, their insidious virus could easily have been altered to kill everyone.

As it was, humanity could be rebuilt—one baby at a time—as long as there were women to have them. And, of course, a few males who were impervious to the virus. Which was where Zeke and his brothers came in.

"You're not jit'suku," the angelic woman said, bringing Zeke out of his drifting thoughts. "That's good. That's really good." She seemed to want to reassure herself. "It's just that we haven't seen anyone from the stars in many, many years. Our Order selected this inhospitable planet as a retreat when the war came too close to our home on Espia. Our elders eventually cut off all communication with the outside so that we might hide from the jit'suku."

"Then you don't know what happened?" Zeke could hardly believe what he thought she was saying.

His angel shook her head, and he noticed the other women in the small cavern drawing near to listen in. He had to tell them, but he was so damned tired. Still, he could give them the bare bones at least, before his strength gave out completely.

"We defeated the jit'suku armada at Markesh, but they released a viral weapon. It killed billions of men all across the galaxy. The jits are gone except for a few pirates that continue raiding and fighting. One of those made me crash here." He paused to take a breath. "I'm one of the men known as the Sons of Amber. I was genetically engineered to help repopulate the species. I'm immune, and more importantly, I cannot carry the virus, so your people are safe from contamination."

"The jit'suku really went that far? They used a bioweapon?" she breathed, seeming to grasp the severity of the situation.

"Their armada was almost completely destroyed. It was a desperate act of a defeated enemy, vile and unconscionable," he whispered as his strength ebbed.

The angel sat back, looking stunned.

"Did you hear, Sister Angela?" The other little nun was back, moving closer on his other side. She was younger than his angel, but cute as a button.

For the first time in his life, he realized he was looking upon a human female without any trace of lust. That thought had him rocking back on his heels, figuratively at least. Perhaps it had something to do with his illness, but no, he wanted his angel as much as he ever wanted any woman. Actually, more so. He didn't think he had ever wanted a particular woman this much. But her little friend didn't stir any interest in him at all.

The realization confused him, but he was too weak to sort through it now. He decided to concentrate his energies on getting well first, then he would figure out what had changed inside him. Because surely, something fundamental had indeed, changed.

He had been feeling different for a while, but he hadn't been able to figure out what was wrong. It looked like he was going to have to deal with it now. There was little more he could do while confined to a sick bed. Maybe it was time to take stock of what was going on inside him and plot a course for the future.

"I heard, sister," the woman called Angela replied to her friend, her soft voice drawing Zeke's wavering attention. "We must tell Mother Rachel."

"I know already, children. Be at ease." A new, more mature female voice floated through the chamber to him, coming closer. With it came a fragrance of flowers and earth, and a beautiful, slightly older woman stepped into his line of view. "Your arrival was foreseen. Be welcome, Son of Amber. Can you tell us your name?"

He didn't know why, but he wanted to tell this lovely older woman whatever she wanted to know. He would reveal all his secret plans, if she just asked, but she only wanted his name. That he could give her before his strength failed.