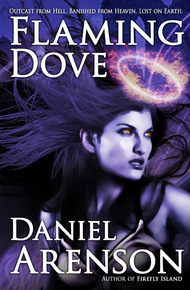 Daniel Arenson is a bestselling author of epic fantasy.

Four of his trilogies—Dawn of Dragons, Song of Dragons, Dragonlore, and The Dragon War—are set in Requiem, a world where humans can turn into dragons. He's also the author of Moth, a series about a world torn in two—its one half always in sunlight, the other always dark. Eight of Daniel's books have hit Amazon's overall Top 100 bestsellers list; one has hit the Top 20. In total, his books have sold over 500,000 copies.

The battle of Armageddon was finally fought... and ended with no clear victor. Upon the mountain, the armies of Hell and Heaven beat each other into a bloody, uneasy standstill, leaving the Earth in ruins. Armageddon should have ended with Heaven winning, ushering in an era of peace. That's what the prophecies said. Instead, the two armies—one of angels, one of demons—hunker down in the scorched planet, lick their wounds, and gear up for a prolonged war with no end in sight.

In this chaos of warring armies and ruined landscapes, Laila doesn't want to take sides. Her mother was an angel, her father a demon; she is outcast from both camps. And yet both armies need her, for with her mixed blood, Laila can become the ultimate spy... or ultimate soldier. As the armies of Heaven and Hell pursue her, Laila's only war is within her heart—a struggle between her demonic and heavenly blood.

Stuck in Catholic school hell for twelve long years, I had plenty of time to read the Bible to kill time in church. My favorite book was Revelation, which read like an apocalyptic thriller. Daniel captures that essence in this war between the angels and demons. – Thomas K. Carpenter

Something is out there, his thoughts whispered. Something lurking in the night. Standing on the fort's dank walls, Nathaniel scanned the darkness. He saw only rain and waves, but still the thought lingered. There is evil beyond these walls.

It was past midnight, and clouds hid the stars, grumbling and spewing sheets of rain, crackling with lightning. The waves roared, raising showers of foam, pummeling the ancient Crusader fort as if trying to topple it. It was that kind of storm, Nathaniel thought as the winds lashed him. A storm that could tear down the world.

Nathaniel tightened his grip on his spear, the rain pelting his bronze helm. An unholy storm, he thought, and an unholy night.

A glint caught his good eye, coming from the flurrying sand of the beach below. Nathaniel raised his spear, gazing into the darkness, heart leaping. He shifted his shoulder blades as if he still had angel wings to unfurl. He had lost those wings years ago, along with his left eye, to demon claws. And you know what happens to wingless angels, he thought, scanning the beach. They get stuck with guard duty on stormy nights when even God wouldn't step outdoors.

Where was the glint? Nathaniel could see nothing, only crashing waves and endless darkness. He must have imagined it. He cursed himself for his quickened heartbeat, for the whiteness of his knuckles around his spear. He had killed more demons than he could count, had even faced an archdemon once and lived to boast of it; it was damn foolishness that a mere storm should faze him, even if it was the worst storm he had seen on this world. And yet... and yet there was something about this night, something of a malice beyond waves and wind, beyond Hell itself, perhaps.

Lightning flashed and there—a glint in the skies. Nathaniel thought he glimpsed great bat wings spread in flight before the light vanished, but... that was impossible. No demon could fly over this beach without triggering all their alarms.

Nathaniel cursed the shiver that ran through his bones, these bones broken too often in battle, now creaky and aching. The waves battered the fort's wall, spraying him with water and foam, and Nathaniel cursed again and spat. He'd had too much rye last night, that was all; he was seeing things.

Something creaked behind him.

A cry pierced the night.

His spear banged against metal.

"Who's there?" Nathaniel demanded, gripping his spear.

"Please, sir! It's me." Eyes glowed in the darkness.

Nathaniel groped for the lamp at his feet. It lay on its side; he must have kicked it over. He raised the tin lamp, casting its flickering glow against the young, pink-faced angel who stood before him. A dent pushed into Yaram's breastplate where Nathaniel's spear had found it, and the angel's eyes were narrowed with pain and terror.

"God damn it." Nathaniel spat. "Corporal, never creep up on an officer like that; my spear could have hit your face just as easily."

"Sorry, sir, but... I pulled guard duty tonight. I was in the eastern tower, and sir, I saw something."

"And abandoned your post?" Nathaniel clenched his jaw. He should have the angel beaten for this.

"Micah, my partner, guards there now, sir," Yaram said, voice shaking. Thunder boomed. "I came to find you. We saw a shade in the night, like a demon, but...."

Nathaniel cursed under his breath. The rain pounded his helmet and ran down his face. "But it wasn't a demon, was it?" he muttered. So he had not imagined it; there was something out there, neither demon nor angel, a creature that had crept past their alarms, that now flew above them as if unfazed by the garrison of angels below.

There was only one creature of such power, of such brazenness, Nathaniel knew. The winds howled and more waves sprayed them, salty against his lips. The lamplight flickered, its shadows dancing.

"Sir?" Yaram said, pale. "You don't suppose it could have been her? That she has returned?"

Nathaniel raised his spear and pointed it at the younger angel. "Watch your tongue, corporal, or I'll cut it from your mouth. Don't speak of that half-breed here. She fled years ago, you know that."

Yaram swallowed and nodded, rubbing the dent in his armor. No doubt, an ugly bruise was spreading beneath that dent. "Yes, sir."

Lightning flashed again as waves crashed and roared, as the winds howled, and there again—great bat wings under the swirling clouds, and a shriek from above, a shriek that ached in Nathaniel's old bones.

Yaram and Nathaniel stared. They both had seen those wings, those red, burning eyes.

The watch bell clanged in the guard tower behind them, ringing clearly even in the howling storm. Micah sounding the alarm, Nathaniel knew.

Clattering footfalls came from the staircase leading up the wall. Nathaniel and Yaram spun, raising their spears. It was Bat El running up toward them, her gilded armor perfectly polished, her blond hair pulled into a prim, proper bun. Great, Nathaniel thought with a grunt. If anything could make this night worse, it was the presence of Bat El, the prissy daughter of Archangel Gabriel himself.

"A winged creature," Nathaniel grumbled. "Neither demon nor angel." He hated that his words made him shudder. I need a drink.

"There!" Yaram shouted over the crashing waves, pointing to the beach below. They looked and saw it—a darker shade of black, red eyes burning, a halo of flame wreathing its brow.

"Dear God, don't tell me it's her," Bat El whispered, blanching. She unfurled her swan wings and leapt off the wall, gliding toward the creature.

He would have to share Yaram's wings; sometimes wingless angels had to give up some pride. He grabbed Yaram and leapt from the wall, pulling the younger angel with him. Yaram spread his swan wings, caught the storming winds, and they hit the rocky beach below the fort. Through the crashing waves, Nathaniel glimpsed Bat El racing toward where they had seen the creature.

Stupid girl, Nathaniel thought. He pushed himself up and began running after her. If that creature was truly her, truly who they thought, none of them could face her. There were few from Hell or Heaven—not even Gabriel's daughter—who could challenge that thing and live.

Yaram screamed beside him. Nathaniel turned to stare with his good eye. Through the crashing foam, Yaram fell, helmet cracked, neck shred open. Nathaniel cursed and raised his spear.

Red eyes burned in the night, two lit coals. Fangs pushed through a chaotic smile. It was her, Nathaniel knew.

The demon's daughter. The half-angel.

God help us, she's back.

"Bat El!" Nathaniel shouted, when great bat wings slammed against him, sending him flying. He crashed into the waters, salt filling his mouth and nostrils. The waves slammed him against the fort's mossy wall, ringing filled his ears, and he tumbled to the ground. With his last bits of consciousness, he glimpsed the creature gliding through the night, and then the waves slammed Nathaniel against the wall again, and all thought faded.