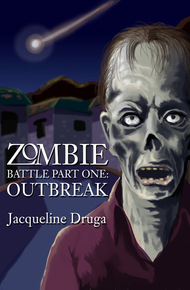 Jacqueline Druga is a native of Pittsburgh and a prolific writer of numerous novels. While she specializes in the Apocalypse, Jacqueline also writes Horror, Comedy, Romance, Mystery and YA. She is considered an authority on Bio-terror and was feature3d on the History Channel.

She welcomes your feedback and you can reach Jacqueline via her website.

A meteor streaks across the sky above a small Peruvian village, landing in a field not far from it. Mesmerized, the unsuspecting villagers race to investigate this phenomenon. Their curiosity exposes them to a virus seeping from the celestial body and within hours they are deathly ill.

Health officials from around the world, race to the site of the outbreak. When they arrive they learn that not only is the virus highly contagious and deadly, but it doesn't stop after the victim has died. The virus reanimates its victims turning them into the unimaginable . . . zombies.

Zombie Battle is a five part series that chronicles the worldwide war against the undead. Part One: The Outbreak, details the start of it all and how the infection escapes its secluded beginnings.

His father had resorted to keeping a bucket nearby. How many times did he vomit? Juan lost count. All he knew was that his father wouldn't let him near the windows or doors and he muttered over and over to a neighbor that something wasn't right.

His father slumped in a chair, eyes dark, face pale. Juan played with his only truck.

A commotion started outside and Carlos with as much energy as he could, stopped and looked out the windows.

Juan was confused. What was all the shouting, screaming?

The voice of a man from outside carried, "Check the house over there."

His father dropped the curtain and backed away when Mrs. Lund from next door cried out, 'I'm not sick."

Panic? Was that the look on his father's face? Panic?

A knock came at the door,

His father jolted a look at the door then raced to the storage closet. He drew back the curtain style door. "In here, my son. Now. And be quite. Say nothing."

"Papa," Juan backed in with his father's shove.

"Nothing. Quiet it is for your own good."

He pulled the curtain closed and Juan huddled against the wall. The knocking was stronger, louder, and in the dark shadows of that closet, Juan could see what was happening.

"Yes?" his father answered the door.

"Take him," The man in the mask and clipboard said. "He is obviously ill. Detain him."

Two other men in what looked like space suits grabbed hold of Carlos.

"Anyone else in the house?" the one man asked.

"No, I live alone. I am a widower," his father replied.

Juan watched his father with dignity walk with the suited men. He wanted to scream, protect his father, but he obeyed his father's wishes.

The leader man with a clipboard walked in and looked around. Just as he turned, he stopped.

Crouching down, he lifted the toy truck and shifted his eyes around.

Juan curled his body as best as he could when he saw the clipboard man start to search. Grabbing his father's coat, Juan wrapped his small frame underneath and prayed he wouldn't be discovered.

The curtain to the closet whipped open.

Juan didn't know what would happen. He expected the coat to be lifted from him.

He didn't move, breathe, or shudder. He just hid and stayed that way even when he heard the man leave the home.

How long though? How long did he hunch in the closet. He didn't know. He had fallen asleep and dawn approached, the sky was slightly lit and the village was dead quiet.

He crawled from the closet, the door was open.

Juan was scared, too scared to even call out, make a noise or be seen.

As best he could, he snuck to the door and peaked out.

Nothing. No one. Just emptiness.

Where had they taken his father?

Where was everyone else?

Juan didn't know, but he had to find out. At the very least, he had to get help.

Even though it was a good distance away, Juan ran. He ran as fast as he could to make it to the next small town.