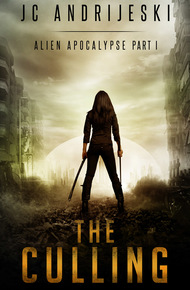 JC Andrijeski writes fantasy, science fiction, dystopian and paranormal romance, most with a metaphysical and apocalyptic bent. Current works include the gritty, epic, psychic romance, ALLIE'S WAR, which follows Allie Taylor and her antihero partner, Revik, in their attempts to save the world from a dark, psychic force. Her dystopian series, ALIEN APOCALYPSE, features Jet Tetsuo, survivor and slave under alien conquerors, and her GATE SHIFTER series is about a shape-shifting alien and a tough-girl PI from Seattle.

JC has a background in journalism, history and politics, travels extensively and has lived abroad in Europe, Australia and Asia, and from coast to coast in the continental United States. To learn more about JC and her writing, please visit http://jcandrijeski.com/.

The Culling by JC Andrijeski

"Humans who ran got culled…"

Jet is a 19-year-old skag, one of the humans still living free on Earth following an invasion of creatures called the Nirreth. Squatting in the ruins of Vancouver, Jet and her family eke out an existence underground, hiding from culler ships and fighting off raiding humans.

No one knows where the alien ships take the people they steal, but they never return. When a culler finds Jet, she may discover the truth the hard way...and end up living among the very creatures that stole her planet and wiped out most of her race.

The Culling is one of those books you'd better not start reading right before bed, because you're going to find it impossible to put down until you get to the end. Julie is a master at these kinds of stories and she doesn't disappoint with this one. – Thomas K. Carpenter

Jet slammed her back against the wall of the ruined warehouse, panting. Crouching down by the moldy cement bricks, she fought to make her breathing silent. Her sword dug into her spine in the middle of her back, but she barely felt it.

Panic filled her, making her sweat even in the early morning air.

She was too late. Surely, they'd seen her.

Being in the wrong place at the wrong time when your mind was wandering, that was the real recipe for death. For being disappeared without warning.

Jet hadn't even heard the cullers when their engines glided overhead. Not until they'd already gotten a lock on her bio-reading and slid lower in the sky for a closer look.

She'd been lost in her thoughts, thinking about what she had that she might be able to barter with Everest to get some fresh eggs. She'd brought a few shirts her mother made, nearly brand new, and she had some fish, some apples from the orchard, even some plums that weren't too moldy from the never-ending rains. Everest wasn't often tempted by fish, but the fruit might work, she'd been thinking, if he was in the mood.

Like as not, he'd want something from her she wasn't willing to give...one of her knives, maybe. Sword-fighting lessons.

Or he might even try for something more personal, since she'd come alone.

It had been stupid to come alone, but that was one of those thoughts it was easy to torture yourself with in retrospect, too.

Jet had been thinking about her little brother, Biggs, in between her more practical thoughts about trading and bringing back some real protein for a change. She'd noticed Biggs hanging around the docks a lot lately. It might be innocent enough, but the fumes down there, especially this time of year, were bad enough that she couldn't help but be suspicious.

She'd heard talk about meetings happening at the docks lately...secret ones, as well as the more open, recruiting kind. She hoped like hell that Biggs wasn't dumb enough to get sucked into the rhetoric of the rebels, but she feared the worst.

She'd seen that look in his eyes before. It had gotten more intense lately.

Anyway, Jet knew how obsessive he could be, how single-minded. She'd noticed him reading more, and a lot of the book covers were new, and didn't come from the library they shared with their longhouse families.

He did his best to hide it from her, but she'd also seen him practicing more with the bow, and even once with one of her old, wooden, practice swords. He was only thirteen, but she knew they recruited a lot younger than that, these days. The rebels had been coming by the camps more often, too, trying to recruit younger and younger, likely because they'd run out of full-blown adults willing to become cannon fodder fighting the Nirreth.

It was the same reason she practiced with her sword, day in and day out, even when she had no reason to use it. Nothing was worse than sitting around, waiting to be picked off like sheep. The rebels talked a good talk, about honor and sacrifice and standing up for the race. They seemed like an alternative at times, even to her.

But she'd buried too many in their settlement to be all that convinced.

Anyway, the more cynical side of her pointed out that a lot of those rebels were smugglers. She'd heard tell that even Richter had been seen trading with the Nirreth, and supposedly he had more rancor for the invaders than most. All of the smugglers and bandits were known to cut corners, though...especially when it came to dealing with the Nirreth and their 'watch' squads. Who knew if those same rebellion leaders were selling some of the local kids to the cullers, to get the authorities to look the other way?

All of this had been going through Jet's mind as she walked.

She'd thought about how she might talk to Biggs about it, or at least get him to visit the crumbling lighthouse near the sound, where old Chiyeko lived. Chiyeko might get him to see reason. Biggs always got along well with the old woman, better than Jet did, truthfully. He might even listen, if Chiyeko told him to leave the rebels alone.

Jet was lost in half-baked thoughts around this, as well as a made-up argument with Biggs about the rebels, when she felt the wind of the culler's hovercraft.

A warm, hot wind. It had a distinctive smell, like the smell that followed lightning after it struck the earth. Jet felt that whisper of wind and it seemed to crawl down her spine like a living thing. Adrenaline flooded her bloodstream, bringing bile to her throat.

After a split-second of paralysis...she ran.

She sprinted straight for the nearest cover, a narrow alley off the main street where she'd been walking. She'd kept under the eaves of the buildings and out of the center of the road, of course, but that alone wasn't enough. It was never enough to stay roughly out of sight...not when one traveled on a road wide enough for the culler hovercrafts to patrol. Her mother drilled that into Jet since she first learned to walk.

She'd been watching her feet, instead of the skies like she should have. She'd been listening to her thoughts, not to the birds, or the wind, or the rustle of paper and dirt, or any change in direction in the shifting air of the street.

Otherwise, she would have seen, a hair's breadth sooner, that the paper had begun to swirl and dance lightly from the hovercraft's exhaust. She would have noticed the birds had grown silent. Jet did notice these things, but that small gap in her awareness was enough to make the difference between 'just soon enough' and 'too late.'

It was enough for her to feel the wind of the hovercraft on the back of her neck.

Jet sprinted to cover deep in the shadows of the alley.

Once fully in the dark, she waited.

She crouched there, unwilling to risk moving until she could see the ship. Fighting to keep even her breath silent, she stayed where she was, peering up at the sky to try and determine if the glider's pilots had, indeed, spotted her. Movement without cause was risky. She'd learned that young, too. Most people who got caught did so because they panicked and couldn't stop running. Running from the Nirreth was like waving a red flag in front of a bull.

If they hadn't seen her, they might just pass by.

If they hadn't seen her, running would only be more likely to get her noticed.

If they had seen her, running wouldn't save her. Once she'd done that, they would give chase no matter if they were trawling for skags or not. It was hardwired into the Nirreth's instincts to chase anything that ran.

Humans who ran got culled.

These rules had been hammered into Jet's brain so frequently and so vehemently that to think them was like breathing. They whispered through her mind like a mantra, more of a prayer than even a reminder...a reassurance that if she followed the rules, she just might get out of this alive.

…Then she saw the searchlight flicker to life.