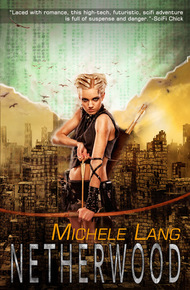 Michele Lang writes supernatural tales: the stories of witches, lawyers, goddesses, bankers, demons, and other magical creatures hidden in plain sight. She also writes tales of the future, including the apocalyptic adventure NETHERWOOD and other stories set in the Netherwood universe. Author of the LADY LAZARUS historical urban fantasy series, Michele's most recent book in the series, REBEL ANGELS, released March 2013.

Michele is a lawyer who has practiced the unholy craft of litigation in both New York and Connecticut. She returned to her native New York shortly before 9/11, and now lives in a small town on the North Shore of Long Island with her husband, her sons, and a rotating menagerie of cats, hermit crabs, and butterflies.

To find out more about Michele's books, visit her on the web at www.michelelang.com

"Laced with romance, this high-tech, futuristic, scifi adventure is full of suspense and danger." -SciFi Chick

A subversive, thrilling tale of the Singularity's dark side...and a love so intense it has the power to transform the world.

Talia Fortune, intergalactic sheriff, hunts a dangerous outlaw through cyberspace and into the Real. The chase brings Talia face-to-face with the terrifying truth — humanity, and Talia herself, unknowingly stand in the shadows of a high-tech apocalypse driven by artificial intelligence.

Talia must find the courage to trust the same man who destroyed her illusions and led her into danger, and disappear into an untamed, alien wilderness where no ordinary rules apply...

This edition features bonus material, including a short story set in the Netherwood universe, an interview with the author, and more...

At this point, I didn't know what I was looking for, but I knew the access points were here. This grid was a lot more streamlined than Earth's. The simplicity made for fewer weaknesses, but the back doors would be correspondingly easier to ﬁnd. If I could ﬁnd those back doors, I would ﬁnd traces of the people who had used them to undermine the security of the Fresh Havens base.

Kovner and his accomplices.

I bent to examine a sharp break in the code, visualized as a rip in the virtual landscape. Not an elegant job. A brutal tear—not the Avenger's style, I mused.

A hand clamped over my mouth and pulled me backward into a Dark Chamber—a nest of silence, avatar-created. A hidden pocket where avatars could go to chat privately. Or do other things.

I ﬂipped upside down, weightless, and grabbed my assailant by the hair. The Avenger. I could tell it was him by that mane's rough thickness.

After a slack moment of complete shock, I fought him with real fury, real grief. He'd crossed the line, and now both of us would pay the price.

"You're under arrest, you bastard."

I'd wanted to avoid encountering him down here for this very reason, but when he laughed, my anger mushroomed into something nuclear. "Don't patronize me."

"You can't hold me, Amazonia. You can't." He shook his head. "I knew you'd come for me. But not, I must say, in an ofﬁcial capacity. So, tell me who you are—a government agent, then?"

"You know enough about me to ﬁgure out who I am."

I fought to pin him, but brute strength was no longer enough. He faded to a ghostly shade and slipped out of my grasp.

The move blew my mind. "How did you do that?"

"I've learned heaps since we last encountered one another."

He shimmered before me, a hard-eyed specter. "You've changed, my dear. As have I. Ambition trumps affection, it seems. Your ardor grows cold. And you betray me without a second thought."

"You are endangering the outpost."

I grabbed my mace tight, though it was useless against this adversary. "I've sworn, along with my colleagues, to uphold the law and protect the people on this base. And I am certainly not alone in my duty. You smashed the interface. It was you—Kovner."

His face blanked, as if I had somehow managed to slap him through the ether. We both knew I had committed an unforgivable sin, naming an avatar by a surface name. We both knew the Avenger was dead to the Netherwood now; his cover was blown.

I waited for him to reciprocate. I wanted to hear him say my true name. Enemies should know one another. I wanted him to kill Amazonia and then I'd hunt him down on the surface until he was mine.

Instead, he did something even worse. He leaned forward and stared into my eyes—the Deep Gaze that we were forbidden to make.

But the illusion held; we became something more than a falsity.

We locked gazes, our hearts beating as one, our breaths gasped hot, in unison. I felt desire vibrating through me, unwanted but no less powerful. I lusted for him. I hated myself for my longing, for wanting to consummate my desire the way we always had: passionate, explosive, No Real-world effects. Simple, physical release.

I knew those days were gone forever. I was closer to this man than anybody I knew in the Real. But I'd never admit it to him, or surrender my honor to that weakness again.

His smile shot warmth into my veins like a drug. Before I could break our connection, he rematerialized, stroked my lips with the tips of his ﬁngers. He cupped my face in his hands, and the gentle touch of his lips on mine pierced me through the heart.

I closed my eyes against him, and the connection between us grew even stronger. That kiss grew in intensity until my limbs weighed down with need for him, and before I could stop myself, I returned the kiss, enfolded him into my arms, against my cyberheart.

"Hunt me." He spoke directly into my mind, even as the currents of the kiss washed away my anger. I sighed, opened my mouth to his…and he shivered away into nothingness.