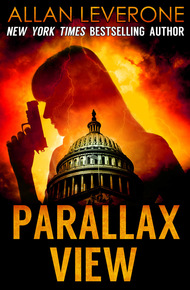 Allan Leverone is the New York Times and USA Today bestselling author of nine novels including MR. MIDNIGHT, named by Suspense Magazine as one of the "Best Books of 2013."

Allan lives in Londonderry, NH with his wife of more than thirty years, three grown children and one beautiful granddaughter. Learn more at AllanLeverone.com, on Facebook or Twitter, @AllanLeverone.

It's spring, 1987, and CIA Clandestine Ops agent Tracie Tanner is tasked with what should be a relatively simple mission: deliver a secret communiqué from Soviet General Secretary Mikhail Gorbachev to U.S. President Ronald Reagan.

After smuggling the document out of East Germany, Tracie believes she is in the clear. She's wrong. A shadowy cabal is at work, people who will stop at nothing to prevent the explosive information contained in the letter from reaching the White House.

Soon, Tanner is knee-deep in airplane crashes and murder, paired up with a young Maine air traffic controller and on the run for their lives, unsure who she can trust at CIA, but committed to completing her mission, no matter the cost...

I've always loved unlikely heroes, the people who persevere against all odds, and it was this type of character I had in mind when I created CIA Black Ops specialist Tracie Tanner. She's petite and pretty, with flame-red hair and a stubborn personality, and Parallax View introduces her character in a non-stop action thriller that moves from Cold War Moscow to East Germany to Washington, D.C. – Allan Leverone

Tracie Tanner carefully eased one drawer closed and opened another in the dented, World War II-era metal filing cabinet wedged behind the desk of the general manager's office at Shipyard No. 444. Where's that damned file? She'd been searching for nearly half an hour already with no luck, unable to decipher the Soviets' Byzantine filing system.

Her eyes burned from the strain of reading reports typed in Cyrillic on substandard Russian-made typewriters, and she could sense time ticking away—surveillance reports indicated the guards' patrol patterns included a walk-through of this very office every forty-five minutes or so.

The darkened office smelled sour, its cement block construction retaining the unpleasant fishy stench of the Black Sea combined with old sweat. She clenched a small penlight between her teeth to free up both hands for the search, and she worked methodically, flipping through file after file under the most likely tab headings.

Tracie, a CIA clandestine ops specialist, had been assigned to remove the guidance system software specs for the Soviet aircraft carrier Buka, scheduled for commission later this year, and replace them with bogus specifications. Construction had been completed on Buka years earlier, but bugs in the ship's sophisticated software had delayed commissioning ever since.

Four years ago, in a successful nighttime operation, another CIA clandestine ops specialist had broken into this very office and replaced the proper specs with useless, CIA-generated data. Now the goal was to repeat the scenario and delay launch of the Buka for several more months, if possible.

Tracie worked quickly but thoroughly. Next to the office door the Soviet bureaucrat in charge had placed a large aquarium filled with exotic fish, and the steady drone of the water filter motor began to lull her into drowsiness. She blinked hard, closed the filing cabinet drawer, and opened another. She had worked her way through nearly two-thirds of the file cabinet and had found nothing.

And then, there it was. The first folder in the new drawer. It was blue, filled with several dozen sheets of numbers, diagrams and specifications. Tracie lifted out the folder and compared some of the sheets inside it to corresponding sheets of paper in the dummy file she had brought into the office. They appeared identical. The differences in the specifications were so minute it would take a team of engineers months to decipher the problem, and that was after they had discovered there was a problem.

She smiled in the darkness and removed the original specs, sliding the forged documents into the file folder in their place. She rolled the drawer closed, slowly and quietly, and then stood, glad to be finished. She placed the original software specs into a small briefcase and snapped it shut.

Padded quietly across the office.

And dropped her flashlight. It slipped out of her hand and clattered to the floor, rolling to a stop against the door.

Tracie froze, waiting to hear a shouted challenge or footsteps pounding down the hallway.

She waited fifteen seconds. Thirty. Then breathed a silent sigh of relief and picked up the flashlight. Be more careful, dummy.

She eased the door open and stepped into the hallway. And walked straight into a Soviet security guard's Makarov semiautomatic pistol.

Tracie stepped backward instinctively, calculating the odds of reaching her Beretta 9mm inside the shoulder holster under her jacket. Result: not good.

The guard said, "Stay right where you are," in Russian, and Tracie moved back another three steps, hoping he would follow her into the office. He did.

She stepped back and he moved forward. Stepped back again and he followed, still holding the gun on her. She backed into the general manager's desk, studying the guard. He was barely more than a kid, maybe eighteen or nineteen, and he wore a threadbare Red Army uniform that had probably been handed down from soldier to soldier two or three times, maybe more. His hands were shaking, just a little, and he said, "You're coming with me."

I don't think so, Tracie thought, but raised her hands to chest level in submission. "All right," she answered in Russian, hoping her slight English accent would be undetectable. "This is a simple misunderstanding. I can explain."

"Not my problem," the guard said. "You will explain to my superiors." He gestured with his head toward the door. "Go," he told her, "and do not try anything stupid." The Makarov stuttered and jumped and Tracie hoped he wouldn't shoot her by accident.

The guard stepped aside to allow Tracie to pass him into the hallway. He brushed up against the table holding the aquarium, and as she moved past him, she pushed hard, a blur of sudden motion in the semi-darkness, and smashed his hands, gun and all, straight down into the side wall of the aquarium.

The glass shattered and the guard gasped, the sound almost but not quite a scream. He pulled the trigger reflexively and the gun fired, the slug whizzing past Tracie's head. A wave of water and fish flooded out of the tank, soaking Tracie and the guard. Even in the dim light she could see the razor-sharp glass had ripped a gash in the guard's forearm. Had she been sliced, too? No time to worry about that now.

The guard stumbled forward and Tracie ripped the gun out of his hands and slammed it against his temple. He sank to his knees, stunned. She hit him again and he dropped to the floor. He didn't move. She prodded him with her foot and he lay unresponsive. He was out.

But now she had another problem. The shipyard was patrolled at night by a team of two guards, and if the other man was anywhere near he would have heard the gunfire. He could be rushing here right now. He could be on her in seconds. Tracie unlatched the briefcase and dropped the guard's Makarov inside, then snapped it shut and eased out the door, her Beretta drawn, alert for any signs of the second guard.

He was nowhere in sight.

She made her way out of the building and through the shipyard, moving between concrete and aluminum structures like a wraith. At the edge of the shipyard property, she turned toward the Black Sea shoreline and an inflatable boat, which would take her to a U.S. submarine stationed nearby. She disappeared into the black Ukrainian night.