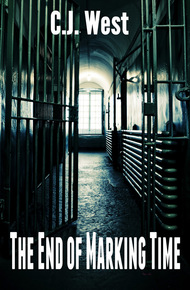 C.J. West is the author of eight suspense novels including The End of Marking Time and The Winemaker's Son, which was optioned into development for film by Beantown Productions, LLC (screenplay by Marla Cukor). Find CJ at www.22wb.com or at www.facebook.com/cjwestfans

The End of Marking Time by C.J. West

Gifted housebreaker, Michael O'Connor, awakens inside an ultramodern criminal justice system where prison walls are replaced by surveillance equipment and a host of actors hired to determine if he is worthy of freedom.While he was sleeping, the Supreme Court declared long term incarceration to be cruel and unusual punishment and ordered two million felons released. The result was utter chaos and the backlash from law-abiding citizens and police departments reshaped the United States.

Felons now enter reeducation programs where they live freely among the population. At least that's what they think. They are enslaved to an army of counselors and a black box that teaches them everything they failed to learn from kindergarten through adulthood. Michael believes he's being tested by the black box, but what he slowly begins to realize is that everything he does is evaluated to determine whether he lives or dies.

In The End of Marking Time, C.J. West has crafted a thought-provoking masterpiece that introduces themes of crime and punishment while keeping you on the edge of your seat at the same time. West is a gifted storyteller, and this book is a critical piece of the overall Action/Adventure StoryBundle. To me, this might just be the book that ties the whole bundle together. – Allan Leverone

I wasn't surprised when the Plexiglas partitions shot up out of the floor and locked me in front of this window. I had seen the breaks in the tile floor and I knew what was underneath because Wendell has done this to me before. I know this time is different. I'm not going to pretend I'm not scared to face your decision. If you were on this side of the glass, you would be scared, too. You can tell yourself you're too good to end up where I am. That you're not like me. But how different are we really? I wish I could see you, to see the difference for myself, but I understand why Wendell is hiding you. You probably have a steady job, a house, and credits in the bank. You could never imagine doing the things I've done. All you want is to get this over and go back to your life. You might even be ready to push the red button and get on with it, but put yourself in my place. For the next few hours I'm going to tell you my story. I hope you'll give me a chance.

It was my destiny to be trapped in this tiled hallway with you watching me through the one-way window. Maybe not from birth, but certainly from the time I opened the can of peaches I stole on Longmeadow Drive. I had been on my own five years by then and I was at the top of my game. I was cocky, but I had good reason. I chose my targets well and I moved like a ghost when I worked. I hadn't been arrested in three years, not even a close call. Maybe that's why I watched Leno from behind the couch while the middle-aged fat guy drifted in and out of consciousness right in front of me. He snored one minute and laughed at some politician's latest gaffe the next. I watched the show, ate my peaches, and wondered how this buffoon afforded such a huge place all by himself. It wasn't just him. The whole street was full of little kings and I couldn't imagine there were so many kingdoms in America. Don't get me wrong. I was glad to have them around because I worked my way through the royal suburbs week after week. I should have been paying attention instead of wondering why someone with so much money lived by himself. Unlikely he had a mother like mine. Or maybe he was just like my father.

Usually I cleaned up after myself so well that my marks weren't even sure they'd been hit. Plenty of them blamed the shifty-eyed kid next door or raged against a child they suspected of buying drugs. Normally I would have cleaned the fork and put it back, then rinsed the can and left it with the recycling, but that night I left the can on the end table, the fork leaning down into two inches of syrup. I knew I could never come back. I had been through half the houses on this street, pinched a wad of cash here, a diamond necklace there. After I slipped out with the Mercedes that night, the neighbors would take a closer look around their houses and the emails would start flying. There would be meetings with the police, talk of a neighborhood watch, a few of them would even buy guns. Sometimes when I was done with a place like this, I'd tip off a real bungler, a smash-and-grab type hyped up on drugs, and send him stumbling into a hornet's nest of nervous housewives and angry husbands. Sometimes the druggie barged in and out so fast he got away the first time, but eventually he would end up cuffed in the back of a cruiser. That satisfied the neighbors and covered my trail nicely. Everyone was happy except the guy forced to detox in a six-by-nine.

I should have sent one of them in my place, but I wanted the Mercedes. It took me five minutes to creep out of the living room and up the stairs to the master bedroom. The keys to the Mercedes were right on the bureau in plain sight, as was his wallet with five credit cards and six hundred forty in cash. Who carries that much cash anymore? I left him twenty for breakfast and took all the plastic. If he had more cash lying around, I couldn't find it. I checked the sock drawer, then felt under the bureau and along the back edge with no luck. He might have had a safe behind one of the oil paintings, but I couldn't risk taking them down with him in the house. I was sitting at the desk in the corner with his checkbook in my hand when he decided he'd had enough of Leno and lumbered upstairs. The room was massive, but there was only one way in and one way out. I gambled. I could have headed for the door and whacked him when he came in with his eyes half open, but that wasn't my style. I slipped to the floor, crawled into the opening under the desktop, and pulled the chair in behind me. He topped the stairs, trudged past me, and flopped face first on the bed without even looking in my direction.

It took him ten minutes to start snoring regularly. I got back up onto the chair, reassured by the irregular nasal bursts. My gamble paid off. There in the top drawer I found a two-sided sheet of paper that listed every credit card, bank account, and Internet site logon the guy had, complete with passwords. I had his debit card and his PIN, but I wasn't stupid enough to walk into an ATM and use it. I could find some kid I'd never seen before and split the max withdrawal with him, but that was risky. The magic was the plastic. Since I had his list of customer service numbers, it'd take him a day to contact the banks. All I needed was a few hours and he'd be asleep longer than that.

I stopped at the bedroom door to look back and wonder if I'd ever own a place like this. With an eighth-grade education, probably not, especially where I went to school. But for the next thirty minutes, I'd be driving a top-of-the-line Mercedes with a pocket full of cash and plastic.

The garage door opened smoothly. I drove out and hit the remote like I lived there. I was pretty full of myself when I made the corner out of the neighborhood without a soul to see me. I couldn't stop thinking about what the fat guy would do when he woke up. He might not notice his wallet was lighter, but he'd definitely be pissed when he couldn't find his keys. He'd have a fit when he went down to the garage looking for them and realized the Mercedes was gone.

The whole thing would sink in then. He'd call the cops and he'd stomp around the house looking to see what else I'd taken until they got there. It would really hit him when he found the empty peach can on the end table. Eventually he'd remember hearing the fork tap the bottom of the can. He'd turned around once but hadn't really been looking. He felt safe in his home until that night. All people did. They had to. Otherwise they'd go nuts jumping at every noise and shadow. They knew there were criminals out there, but not in their houses, not while they were home. The poor guy wouldn't sleep for weeks.

He'd turn the night over and over in his mind until he realized he'd picked up the clicker just a few feet from where I was hiding in the shadows against the wall. He'd be terrified then. He expected criminals to be violent and unpredictable. He never expected someone like me. I never panic. I know the cops take twenty minutes to get most places and that's more than enough time to disappear if you're not in a rush. I always plan two exits, a hot one and a cool one. I always keep my head and most of the time, like that night, I glide along the cool road home, careful not to get stopped.

Unfortunately, I had no idea who I'd just hit or the shit storm I was about to set off when I sold those credit cards.